Dubbed Project Monarch, the game was an ambitious live public test of a prototype that had players manipulating objects on the billboard while they were using their mobile phones as controllers.

The demo used a combination of Intel’s Smart Edge technology and Genvid’s interactive livestreaming solution. The successful two-day test was held September 8-9 on the Mega Screen located at 1500 Broadway and West 43rd Street in Manhattan, and it utilized a custom adaptation of Streamline’s game Bake ‘n Switch to highlight the potential for a new kind of “mobile crowd gaming.”

Anyone visiting the site was able to join as an interactive spectator using their own phone by simply scanning a QR code displayed on the Mega Screen to access the interactive stream via a nearby 5G-connected hotspot (courtesy of private network provider Sky Packets). No software download or installation was needed to instantly participate. In a larger-scale deployment, as many as 750,000 concurrent users could be participating in the same immersive experience simultaneously, said Jacob Navok, CEO of Genvid, in an interview with GamesBeat. 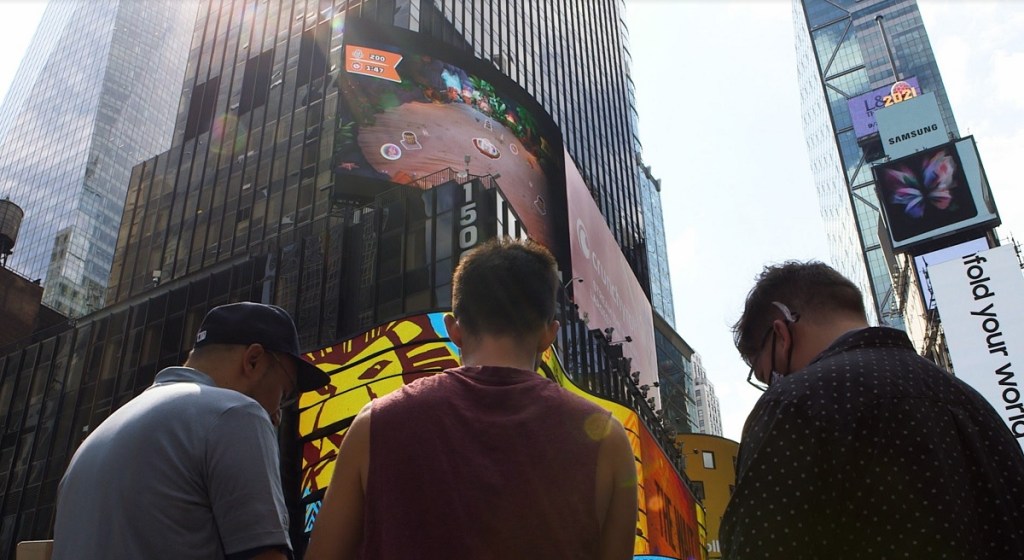 Above: Players use phones to play Streamline’s Bake n’ Switch on a billboard.

Genvid developed a cloud gaming technology that can stream gameplay video to just about any device, including the digital billboard in Times Square. As the players played the game on their phones, they could see the results on the big billboard. This experiment showed that even the most modern digital billboards can be reimagined, Navok said.

The tech required the advanced 5G network supported by Intel’s tech, as the video likely would have stuttered on the smartphones of users who were playing the game, Navok said. The collaboration demonstrated a new service that can be tailored for consumers in the retail and gaming markets, said Caroline Chan, Intel vice president, in a statement.

“There was no wait time for playing,” Navok said. “It was broadcast for bystanders to see. It was the first public demo of a hybrid digital billboard and mobile game.”

Navok first met with Intel in 2019 as the chip giant wanted to show what would happen if you had 5G connected devices in a large open area where anyone could participate. The project was ready to go last year, but as the pandemic started the companies had to put it on hold — at least until crowds started coming back to Times Square, Navok said.

The original plan was to give people 5G smartphones to demo the game, but it turned out that wasn’t a good idea in the pandemic either, as sharing phones means sharing germs. So the team went back to work to let people use their own phones on a fast private 5G network. 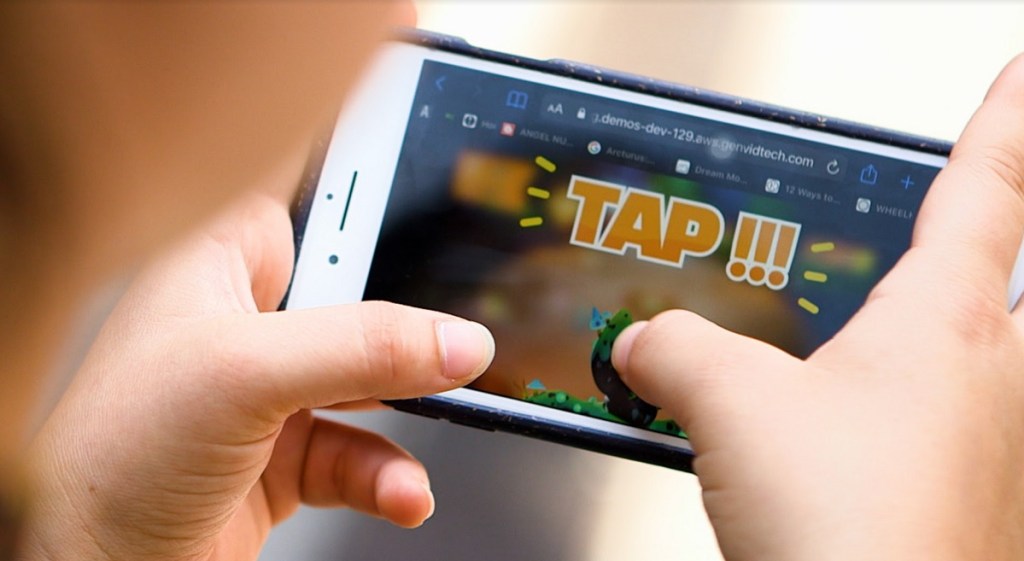 Above: Bake ‘n Switch from Streamline

“We designed the experience intentionally so that there would be other people physically present that you would be able to talk to as you played,” Navok said. “That meant you could collaborate and connect with other people to give them suggestions to help tell them play.”

Navok said that the opportunities to stream games and make huge displays into interactive games are endless, as you can do it in stadiums, arenas, billboards, subways, and other places as well. Those opportunities will multiply as 5G becomes pervasive. Genvid streamed the gameplay to billboard and the smartphones via Twitch and YouTube.

“I think that there’s an opportunity in the advertising space, where you’ve got people captive, looking at different screens,” he said. “The concept was successful. How we commercialize it remains to be seen.”

Navok hopes that games will become more and more social, like the company’s Rival Peak game that enabled lots of people to control AI characters in a game on Facebook.

“The next iteration of rival peak has a lot more social elements,” he said.

Genvid Holdings has raised $113 million to fuel massive interactive live events such as the upcoming Project Raven. Such projects are part-game, part-TV show. Genvid gave us a taste of it this spring with Rival Peak, an online show on Facebook where spectators could determine the fates of 12 AI characters who competed against each other in a Survivor style show. Rival Peak surpassed more than 100 million minutes watched for its first 12-week season.