If your League of Legends or Overwatch ping is always high, a startup called Haste wants to solve that by giving you a more direct connection than your internet service provider might give you. Lag, which is killer in a competitive game, is often a symptom of your traffic taking a non-optimal route through the backbone of the internet. Through a combination of software (on your PC) and hardware (at datacenters), Haste claims it can intelligently guide your gaming data so that you get a far more reliable and responsive connection. 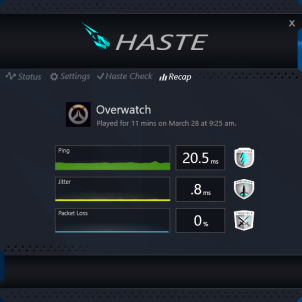 Above: Haste thinks it can make your League connection look like this.

Haste is finishing up an open beta period right now, and it works with Overwatch and League of Legends. Chief executive officer Adam Toll explained to GamesBeat that his company plans to add support for just about any game people play online, and he wants the app to work effortlessly and automatically. I used Haste, and it automatically detected I was playing Overwatch. I typically get a 50ms -to-100ms ping in my Overwatch matches, and I was getting closer to 20ms with Haste. I don’t know if that was coincidence, but Toll explained why I should expect to see an improvement.

“You can think of Haste in three layers,” he explained to me during a conversation last week. “There’s a physical network layer. We have a physical presence with switches and servers in key locations on the internet, including adjacent to game servers. And then running on top of that physical plant is our proprietary network software. That’s everything from proprietary route optimization algorithms—we have our own quasi-protocol we wrap packets into for transport across our platform. The third layer is the software that gamers install on their game machines.”

As a player, you’ll only need to download the software, keep it running in a small client in the background, and have an account with Haste. The app is so tiny that I didn’t notice any hit on performance, but yes — this is another program you’ll have running in your system tray. The company plans to charge a regular fee once it fully launches, but it hasn’t set final pricing.

But while you don’t have to do much to get the benefits of Haste, the company’s infrastructure is pulling a lot of levers behind the scenes. When the app detects a game, it diverts the traffic for it to Haste’s proprietary platform. So if you’re playing Overwatch, your data goes from your home network through your ISP’s network until it reaches a point on that network where Haste can take it over and ensure it gets to the Blizzard servers as quickly as possible.

“We’re doing a bunch of things involving multipathing, where we’re moving your data across multiple disparate paths through our platform, and re-compiling it,” said Toll. “Through our architected routes, we’re optimizing your latency, making sure you get the lowest ping we can get you. But then, just as important, our goal is to reduce packet loss to zero. Usually a little bit comes through, but typically you have near-zero or total-zero packet loss. That’s a huge part of lag and the problems people have in gameplay.”

Haste doesn’t have any one element that enables it to work. Instead, the startup is getting the benefits of combining hardware and software. That way it can use its own fiberoptic lines or something else depending on what is best for your situation.

“It’s a smart network that is constantly figuring out how to deal with an internet that is constantly changing,” said Toll. “It’s everything from peering relationships changing to more immediate fiber cuts, or a sudden surge in congestion for whatever reason. And so it’s constantly changing. That’s why we’re always pairing you on multiple paths, so you have resiliency when suddenly you hit traffic on one of those paths. But it’s also why we have such a diversity of connectivity. The network makes intelligent choices moment by moment and uses the full power of that connectivity.”

And Haste is making that decision based on what will get you the best results in whatever game you’re actively playing. ISPs traditionally make routing choices based on whatever is the most cost effective. Toll also notes that Haste doesn’t fall under net neutrality because it isn’t an ISP. Net neutrality wants to avoid ISPs from playing favorites with traffic, but it doesn’t want to prevent you from finding your own ways outside of the ISP from improving your connection.

I brought up to Toll that Haste’s technology reminds me of the story in the book Flash Boys: A Wall Street Revolt that talks about high-frequency stock traders building their own fiber network in as straight a line as possible from Chicago to New Jersey (where the stock-exchange servers are). That cable still exists and it is run by Spread Networks, and Haste actually used it for routing game traffic from New York to Chicago.

“What’s hilarious is that to use that network at its full power is way too expensive for us,” said Toll. “Only investment banks can afford that. But what they do for us, they introduce a tiny bit of artificial latency, so that we’re just slower than what would be competitive for high-frequency trading. From the gaming point of view, or anything other than HFT, it’s still the fastest connection there is between New York and Chicago. But by introducing just a tiny bit of latency, the price plummets to something that looks more like normal high performance fiber connectivity.”

With the lack of competition among ISPs in many U.S. regions, you cannot just cancel your Comcast plan and tell them you’re moving to an alternative that promises to handle your competitive-gaming traffic in a faster, more efficient way. Haste is instead providing a supplemental option that will work despite Comcast or Time Warner, and it is a service that gamers may consider paying for.