In Holospark’s Earthfall, the world teeters on the edge of annihilation as hordes of villainous extraterrestrials run amok, hunting down and swarming four desperate survivors. It’s a game of teamwork, but equally a game of cutting down tides of gruesome invaders. Before the post-apocalyptic alien shooter, however, and even before Holospark, there was a team working away on a game for MMO publisher Perfect World Entertainment.

“I was at Perfect World working on Neverwinter Online, and they wanted to make a shooter,” recalls Holospark CEO Russell Williams. “We picked up another company, merged together — one of those mergers that never really work — and it actually worked great. We all got along really well, and we were working together on the project, but when Perfect World shut down a lot of projects in the U.S., we decided to stay together.”

Since the team was originally put together to create a multiplayer shooter and they predominantly came from an MMO and action background, it only made sense to continue down that path, though ultimately with a very different game.

“What we’re really fascinated with is co-op,” Williams says. “We love PvP, and I’m a huge Battlefield player, but in Battlefield, I get shot in the face 50 percent of the time. In Earthfall, you’re able to run around with your friends, be the heroes, and have that great co-op experience, and even though there’s been a resurgence in the field recently, I still think it’s a really underserved market.”

Going down the co-operative route allowed Holospark to give players all sorts of toys and empowering moments that would be considered unbalanced in a competitive game. You can grab a flamethrower and mow down hordes of enemies and feel great, whereas in a PvP game those hordes of enemies would be other players who would probably feel less great about being killed off by a single person with a very powerful gun.

Left 4 Dead of course proved to be a source of inspiration, even before Earthfall was being conceived. During the development of the Perfect World shooter, Williams proposed that it might work well with the Left 4 Dead framework, but it ended up being a road the team didn’t go down. Earthfall gave them another excuse to explore that path and make an homage to Valve and Turtle Rock’s seminal co-op romp.

Earthfall shakes up the Left 4 Dead gameplay loop, however. “Our maps feel very different,” Williams explains. “If you look at Left 4 Dead, the maps are A to B, and it’s all about ammo and weapons scarcity. We have maps that are A to B, but we also have hub and spoke maps, where you’re staying in a central area and then venturing out to do an objective and coming back.”

Depending on the level, objective, and what the team decides, the action can play out pretty differently. The team might stick together as they move through the streets, wiping out hordes of invaders — though not too close lest they all get squashed by one of the bigger, beefier alien’s attacks. Alternatively, one player might venture off and discover a tall building that provides an excellent perch for a sniper; from there they can provide overwatch for the rest of the group. Or the group might all be focused on defending a specific location, placing fortifications, and covering all the entrances. 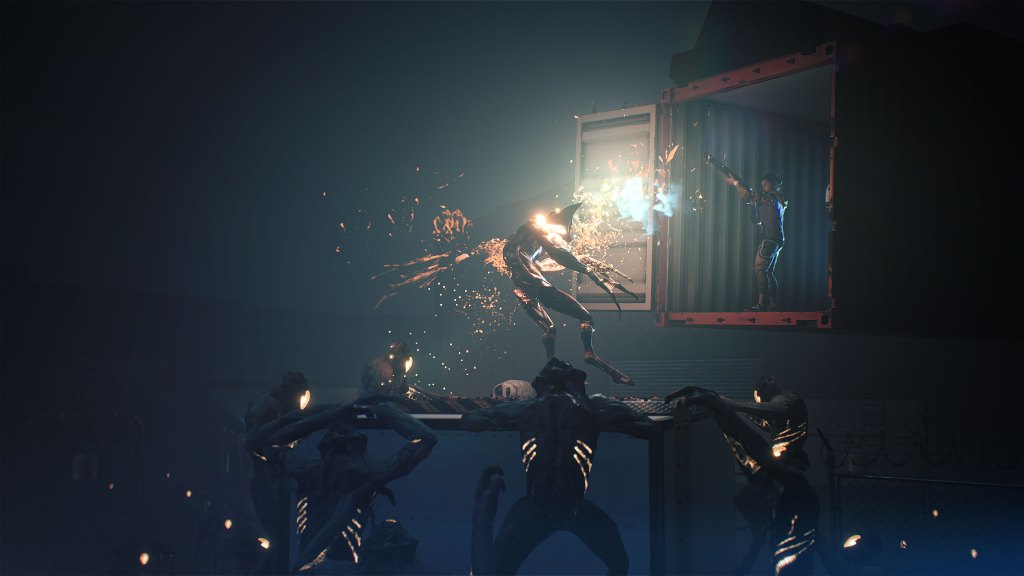 Objectives drive Earthfall forward, and some of them also tie into the game’s larger narrative. For a co-op action game, narrative is a tricky thing to get right, and while Earthfall does boast plot-driven objectives, Holospark has tried to maintain a light touch so as to not get in the way of all the shooting. That means the team has to leverage environmental storytelling, hints, teases, and codexes to make sure the action never has to stop. Critically, there are no cutscenes.

“Some players want more story,” Williams acknowledges. “They want cutscenes, and I’m thinking, do you want that cutscene the fifth time you play the level?” Repetition is a problem that Holospark has been giving a lot of thought to lately. Now that Earthfall has been out for a few months on PC and consoles, how does the studio keep players diving back into levels they’ve already played?

The Inferno update added a new, sizzling level last month, and the upcoming Invasion update will add several more, but just as importantly, it will cater to players who have already played through all the older content by introducing new player progression, a new Horde-style gameplay mode and more siege antics.

“I guess the biggest thing is supporting more repeat gameplay,” Williams says. “We basically went to market with a really great campaign set, and all this new content is focused more on repeat gameplay. You can you do better in that mission repeating it, and you can also get more rewards through the progression systems.

“One of the reasons we can do that sort of update is because after we spent all this time getting to launch — particularly because we did a simultaneous launch with consoles, which took a lot of time — once we got that done, we can actually start to focus on the game. That’s why games as a service is fantastic, because once you pay off that technical debt, you get to work on the juicy fun stuff.”

When the swelling hordes of alien menaces are descending upon the team, Earthfall can become extremely frenetic, but Holsopark is very particular about the type of stress it wants to generate.

“There’s good stress and there’s bad stress,” Williams explains. Good stress is ‘Oh crap, I’ve been trapped, the beast is coming after me, how do I get out of here?’ And bad stress is ‘Somebody on my team is unhappy with me and writing an email to me right now.’ I like the game when it’s very stressful. There’s a beautiful moment when three people have gone down, only one is left, and they’re running around trying to survive. They get one of their group back, that person brings another person back, and you come back from that edge. That’s so exciting and so much fun.”

So the team might be surrounded by aliens and lose track of each other, but an additional layer of in-game communication means that each player will still broadly know what their teammates are doing, even if they’re not talking. If they’re trying to put a battery in a car, a notification will let everyone know who picked up the battery. Carrying an objective means that player won’t have access to their weapons, but the rest of the team will immediately know that they have to provide cover. 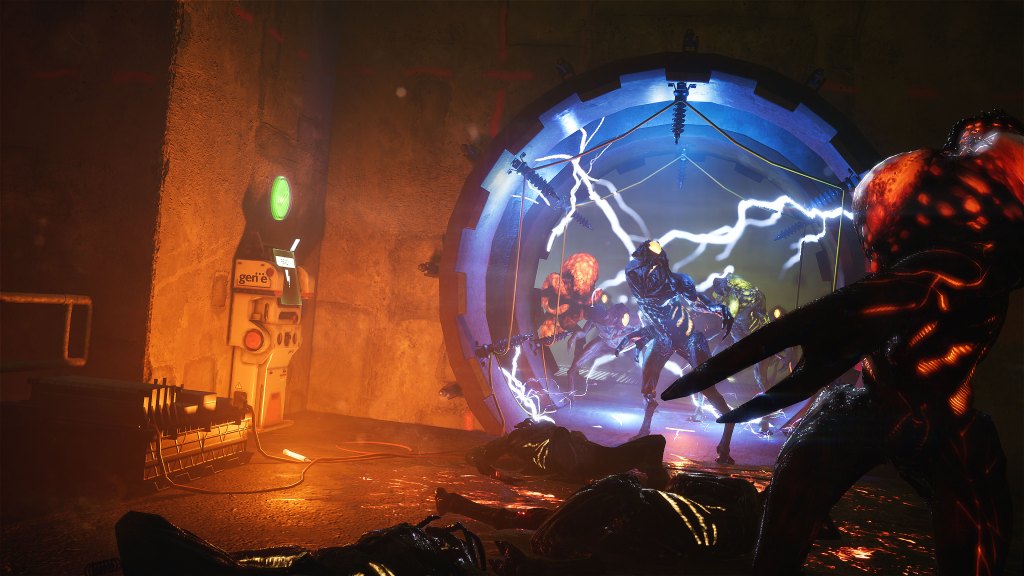 3D printesalso allow Holospark to fine-tune how stressful Earthfall’s levels are. These feature most prominently in the hub and spoke maps, ensuring that players never run out of weapons and ammo, but they also crop up in other maps too. “It gives us a lot of flexibility to build different experiences with the maps,” Williams says. And their capabilities are being expanded in the upcoming Invasion update, specifically in the Horde mode.

These DLC-size updates are free, and while some cosmetic items can be purchased, levels will never cost anything. Williams doesn’t want to split up the players at all. None of the levels need to be unlocked, either, and can be played in any sequence, so keeping the player base together goes beyond making new levels free.

“Co-op trumps everything,” he says. “If I get my friend to buy the game, I want to jump into my favorite levels and get them to play them immediately, rather than saying, “Go and play the first level, then unlock the second level, and when you get to the third level, call me and we’ll start playing.”

Holospark has plans beyond Invasion and a narrative arc that it wants to explore further, but the studio’s also developing new projects. “We just want to have new things to work on for people,” Williams says. “When you’re on a project for five years developing it, and then you’re supporting it for years after that, you want something different. Being able to do multiple projects allows us to get people to take a break, catch their breath, and get their wind back. Now that we’ve built up Earthfall, we’ve built up a great, talented staff and a solid foundation for building new games, and as we start new projects and prototypes, we’re able to leverage that. So we’re looking at new projects right now, and we can start building what’s cool and fun from day one, rather than just building another inventory system.”

Whatever these projects and prototypes end up being, they’ll likely be predominantly co-op and multiplayer titles, like Earthfall. Maintaining more of these games and their communities concurrently sounds ambitious, but Williams doesn’t want that to come at the cost of the team’s work-life balance.

“On this project, individuals have had to crunch a few times, but over the course of three years, we’ve only had around two weeks of crunch,” he says. “A lot of people don’t do very good planning, relying on their employees doing insane hours to compensate for it, but everyone here in management has also been in the trenches, so we try to make sure we’re good with scheduling and don’t wreck our employees’ lives.”

Large layoffs at the end of projects is just as pernicious and common a problem as crunch, and one that Williams works to avoid. “It’s a brutal way to live, so we try to avoid that as much as possible. We almost never have these big moments where we ramp down. That’s one of the reasons we’re running multiple projects. If we decide not to go further with a project, we’ve got other projects that we can move that person to, so they have an opportunity to stay with the company and keep working. We just try to respect our employees and make a really great place to work.”

Invasion will be released on Steam on October 30th.