Even the mightiest chieftain has to start out as a wood-cutting grunt.

Today, Blizzard is one of the biggest companies in gaming and celebrating its 25th anniversary. It is supporting modern hits like Hearthstone, World of Warcraft, and Overwatch. However, before the release of World of Warcraft in 2004, Blizzard was a much smaller developer. This was also around the time Kaeo Milker joined the company as a tester for Warcraft III: Reign of Chaos, the real-time strategy game that was then in development.

Milker worked his way up from that low spot in the company. Today, he is a production director on Heroes of the Storm, Blizzard’s multiplayer online battle arena (MOBA) game. We had a chance to talk to Milker about his long journey with the developer, which also gives us insight into that intense period of growth at the company. 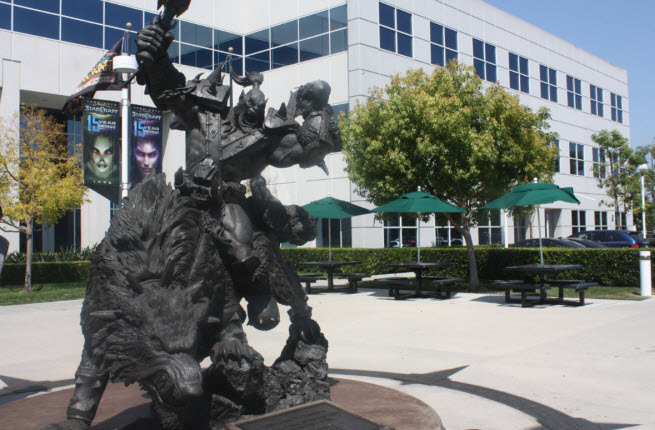 Above: A Warcraft statue at Blizzard’s headquarters in Irvine, California.

GamesBeat: I understand you’ve been at Blizzard for 14 years. You started with an entry level position and worked your way up. Can you talk about your journey with the company?

Kaeo Milker: It’s a crazy journey. I’ll hit 15 years here at the beginning of September. It’s gone by in the blink of an eye. If you go back to the beginning, like so many people at Blizzard, I was a very passionate Blizzard gamer. I had the fantasy of, I’d love to make games. I had no idea what making games meant.

Fifeteen years ago, society in general had even less of an idea what making games meant. For me it was like, I love games, I love Blizzard, my dream job would be at Blizzard. But I had no experience or marketable skills necessarily. I just had a lot of passion to get my foot in the door here.

I was lucky enough to be located in Orange County at the time, and Blizzard was in Irvine then as well. They were hiring for QA (quality assurance) testers for Warcraft III. It was 2001. Back then the way QA worked was it was a very small team of dedicated people, and then they would hire in contract workers to come in for three or six months. You’d come in, test the game, help them get it out the door, and then everyone would go away at the end of the contract. Even then it was a very — the opportunity was cool, I could get in at Blizzard testing games, but maybe it’s over in a month, maybe in four months, just see how it goes. It was kind of scary.

At the time I had a career and a mortgage and all these things, but I said, screw it, I have to take a shot at this and see. Maybe nothing comes of it. I get a taste, I get to see behind the curtain a little. I just had to go for it. So I quit my job and I came and took the contract job for WarCraft III.

GamesBeat: What were you doing before?

Milker: I was an operations manager for a big chain of retail stores in Southern California. A very different world. 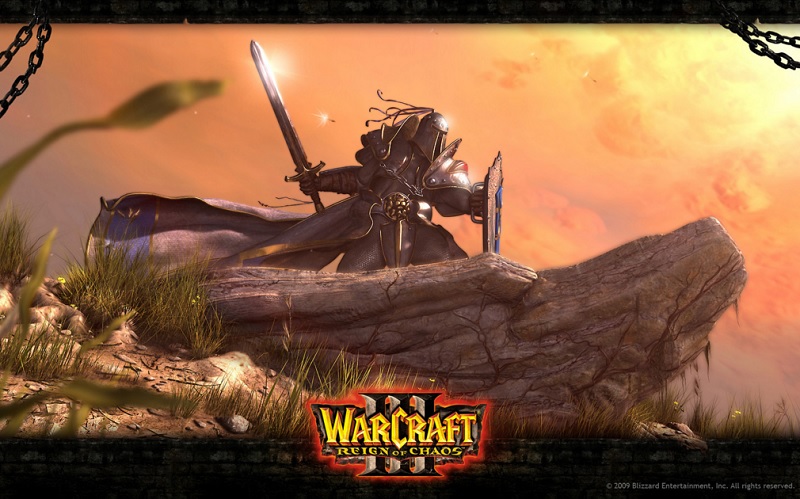 Above: Warcraft III: Reign of Chaos.

GamesBeat: I hear horror stories about testing games. What was it like for you?

Milker: I don’t have any horror stories. We worked incredibly long hours, but what was neat about it — it was a small room full of a lot of very passionate gamers, and we basically just spent a ridiculous amount of time every day pounding on the very early versions of Warcraft III and shepherding it along to its ultimate release in 2002. It was just this room full of cool like-minded people.

Periodically — QA at the time was very separated from development. But developers would pop in and tell us what they were working on, get our ideas. Blizzard was very small at the time. The entire company was smaller than Team 1, which is the strategy team that I’m on making Heroes of the Storm and StarCraft II today. It was a very different, smaller scale world, but it was a very interesting place to be.

I got to see the process and get a glimpse of it from QA, and then be able to every day see what was new going into the game. Massive amounts of new content additions and iteration going on every single day, and QA would be the first people to jump in and test it and get qualitative and quantitative feedback on how things were going. To me it was a really fun process.

Everyone said, oh, you’re getting paid to play games. In reality QA is getting paid to break games, so it’s a different thing than you might imagine. It was hard at the time to try to explain to friends and family what this thing was I just quit my career to do. But it was such a cool thing, to just see how quickly those games came together and how quickly the developers, even then — how critical they were of their work and how hard they worked to refine things and get them as perfect as they could be, which is a difficult challenge when you’re making something like a game out of the ether.

GamesBeat: How did you move up from that position?

Milker: The QA position, like I said, was a contract thing. Every time I was called into the manager’s office, I was like, this is where it all ends. How do I get a job from here? Many of those times I got called in, but I kept sticking around. The process ended up being that I stayed through the completion of Warcraft III, which shipped in July 2002. It was almost a full year of the testing process.

At that point they said, the contract people are done. But for me they said, hey, we’re shipping this game, so now the work goes to tech support. People were going to be calling and writing because they needed help when the game was launched. “Do you want to work on that?” “Do I get to stay here?” “Yes.” “Absolutely!” I could kind of extend your stay of execution a bit longer. Okay, cool, I can do this.

Then there was this moment where they said, hey, we’re getting going on this other game, which was World of Warcraft. “Do you want to help start testing that?” “Is this a real job?” “Yes.” “Absolutely!” It was like I get to be a real boy. So I transitioned into getting hired as a full time QA analyst for the early versions of World of Warcraft. 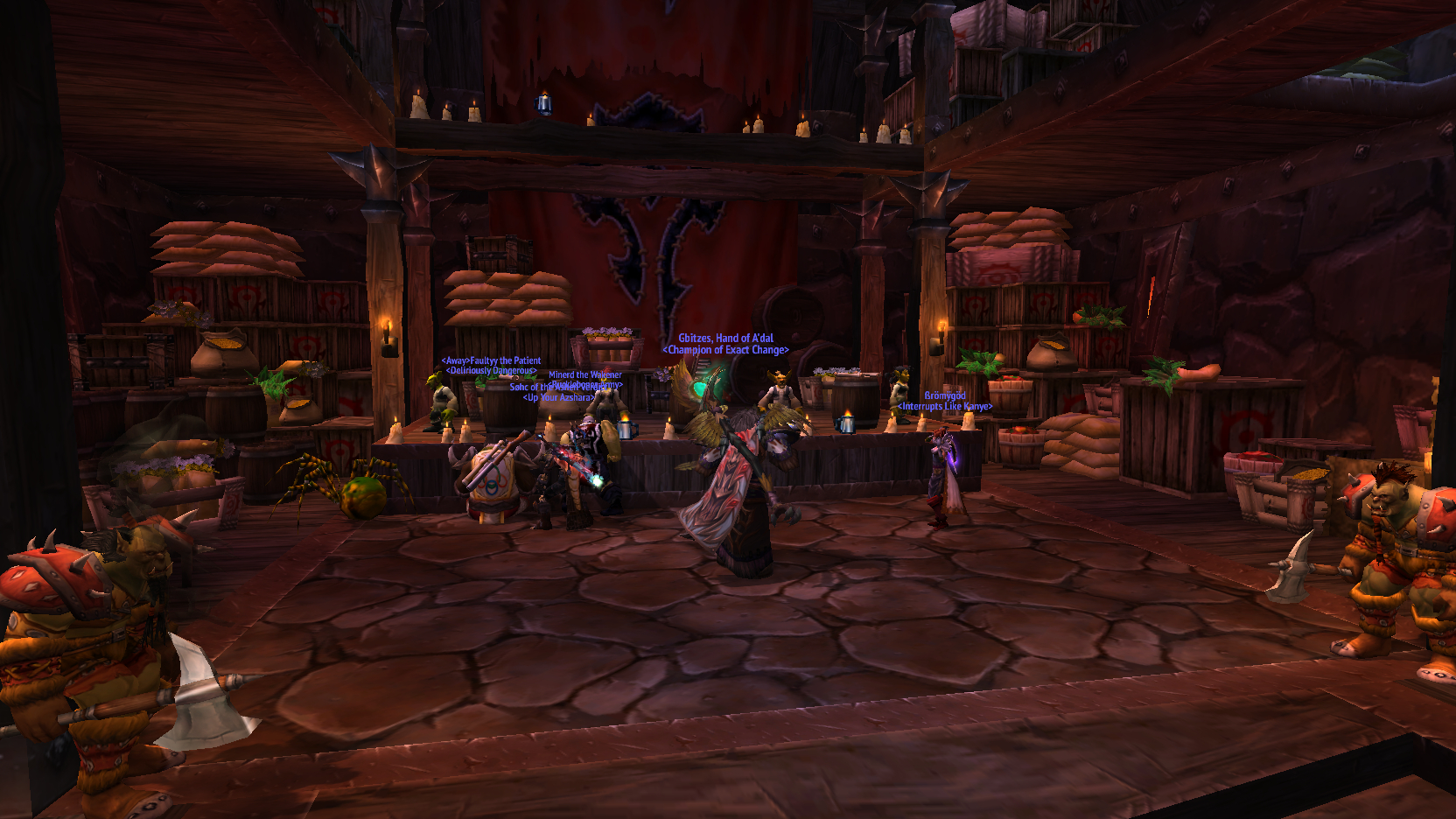 Above: World of Warcraft was one of the biggest hits in gaming history.

GamesBeat: That must have been an interesting job, to see that game start from the early days and be developed into what it was.

Milker: It was so cool. It was such a different thing from all the games I had fallen in love with as a player, and having just come off Warcraft III, to see them branching out into the MMO space. It was relatively small at the time. I had played most of the games in the space. But seeing Blizzard’s take, even in the very early incarnations, was exciting.

Before getting that job, I didn’t even know the game was in development. Things were very secretive. That process went on for a while. I stayed in QA and was really excited there, but my whole thing was, I love this company and being a part of this process. The role of QA is exciting. You’re kind of the first eyes and ears on the ground as the game is developed, giving a lot of important feedback on it. I wanted to make a career out of this, but I didn’t know what that means. I didn’t know what the different roles were in game development, because there wasn’t a lot of information about that. It was this black box from the outside. I’d look at it and say, people are in there doing magical things and these amazing games come out. It was hard to imagine the component pieces of that and where I could fit into it.

After doing QA for a while, a role came up in the company which was this very bizarre hybrid. It reflected how small the company was. It was staffing and facilities coordinator. This was literally being the recruiter for Blizzard, like HR (human resources). Going out and sourcing and hiring people. And it was also the building facilities manager. It was a combination role. I would go from interviewing an art director to unclogging the toilets.

But meanwhile what I liked about the job — when I saw it come up I was like, I’d be working with all the leadership of the teams and the company. I’d be working to hire the next generation of talent for the company, which would give me good visibility into all the different roles and responsibilities. It was an opportunity to see a good picture of all the moving pieces and where I might fit in better. I was really excited to take that role. That’s something I did for the next two and a half years at Blizzard.

That was a cool time. World of Warcraft was in development then, so I could do things like building the WoW team up from a smaller team to a much larger team when it ultimately shipped. Building the original customer service team for WoW, which was huge at the time, but went on to be much, much larger than that. Building out the cinematics team.