GamesBeat: What’s your view of the Aristocrat acquisition?

Gauffin: Aristocrat bought one of the leaders in real-money gambling sites. In recent years they’ve had some of the best-performing, if not the very best in the land-based casino side. They’ve had great slots content. They bought Product Madness, which has been very successful, and they bought Plarium, expanding their digital gaming offering and adding new genres to their portfolio. And now Big Fish Games.

I obviously can’t comment too much on their motives, why they did that, but it’s my understanding that it’s been very clear for them to turn Aristocrat from an old-school land-based slot machine provider into a significant player in the digital gaming market. They’ve made some aggressive moves on the M&A side. Product Madness, the offerings there are beginning to attract hardcore slots players, because they have the Aristocrat content. It seems that when it comes to social casino, there’s a group of players who want to play the same machines you see in the land-based casinos. That’s what Product Madness has been doing.

Aristocrat was missing a social experience, which to some extent I think Big Fish Casino is looking to fill. I believe they see that complementing both their digital gaming offerings and their social casino offering. The Big Fish Casino experience is a lot closer to what we’ve been doing than what the Product Madness guys have done.

For some of these companies, there’s been plenty of capital available. They’ve been very aggressive in looking to create M&A opportunities. In the case of Big Fish—social casino companies have usually been highly profitable. After you reach a certain scale, it’s a profitable business for most of these companies. But that may be more generally how free-to-play works. If you can accumulate a good paying player base, then it’s a sustainable business with nice profit margins. Social casino companies have been profitable, and that’s fueled an active M&A space.

It’s been widely reported that in Playtika’s case—Playtika was pretty exceptional. It grew so big that there were multiple companies bidding for it. Netmarble was one of them, publicly, as well as the giant that eventually bought them. That left many companies hungry, and that’s why social casino continues to be an active M&A space. Besides Huuuge and a few other companies, there haven’t been many new startups coming up.

Above: Huuuge is targeting younger gamers.

GamesBeat: Were you guys just about the last one that got in the door?

Gauffin: Yeah, I think so. The cost of making a product of high enough quality and everything else you need to do, the bar is higher than when we started. Marketing and distribution aren’t any easier at all. It would require more funding and more work. But it’s always with the right amount of innovation and ambition. I don’t want to say that it’s impossible to build new startups. But it’s been challenging to raise for new gaming startups that want to do social casino before you’re profitable.

GamesBeat: As far as why you were able to succeed, do you have a good explanation for that looking back? I understand that you guys were more social than other games.

Gauffin: I believe you can boil it down — the team, me included, we’ve been doing mobile games ever since mobile games got started. That’s the biggest reason. We didn’t start from scratch. We were able to reunite the team, and we were able to leverage some big assets that we’d developed in the past. I had the chance to buy my own company back. That’s the main reason behind our success. Second is finding a new angle, a new way to approach the social casino experience. Coming up with this real time social approach. It’s those two things.

Of course, there are other elements that have helped us. We’ve had great advisors. We were able to get funding early on from other gaming entrepreneurs, including the founder of Big Fish Casino, guys like that. It gave us a lot of confidence that we were on the right track. Their advice was golden for us when we started.

It’s also helped that we had good thing going on in Poland. I’ve been doing mobile games in Poland for many years. The fact that we were building games in Poland initially helped us to do the game with a reasonable budget. It took quite some time to build Huuuge Casino, and if we tried to do it in a more expensive location, we wouldn’t have had proper funding or backing. It required me moving from the U.S. and Europe and going all in on this thing. I wouldn’t have been able to do it any other way.

GamesBeat: The excitement about the whole sector at one point was that social casino games were viewed as a funnel for the gambling companies. I don’t know how true that ever proved to be. Was that a driver of M&A that never panned out, or did it pan out? What’s your view on that?

From those early days of social casino, everyone has realized that this is a real business. It’s not about trying to convert a free-to-play social casino player into a real money gambler. The business opportunity is much more about giving value and entertainment to these free-to-play players as long as possible. When we do that, we’ve made good revenue as a company.

Of course, the industry continues to think about these things and experiment with the best way to succeed. In Aristocrat’s case, they went to buy Product Madness, bought a social casino company, and then allowed Product Madness to leverage their land-based slot machine portfolio. Ever since Product Madness brought in the actual slot machines from Aristocrat’s portfolio, the metrics went crazy. Some of the casinos have realized that there may be better opportunities—instead of converting social players to real money, you can use real money content in a social casino context, and that way you can succeed in this market. 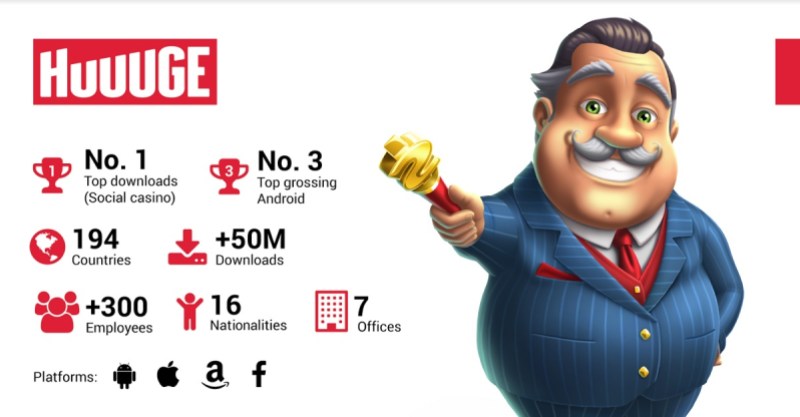 Above: Huuuge has more than 300 employees.

GamesBeat: If these big companies keep on combining, they build some market power. Does it become tougher to compete with that, given how much marketing money they can throw at consumers?

Gauffin: We all compete on the same discovery and distribution channels. Facebook, [App Store] and Google are the biggest ones. There are certainly plenty of companies that have the will and the budget to target the same players. Distribution remains the biggest headache for social casino companies. It’s not easy to find significant scale.

We continue to think of new ways to bring new people in. That includes some new product developments. We’re building new games that will hopefully succeed as much, if not more, than what we’ve done with Huuuge Casino.

GamesBeat: What’s your view of mobile gaming overall now? It’s a $50 billion industry now, according to Newzoo. There are broader challenges in things like ad fraud. Some of the market researchers have pointed that out.

Gauffin: I’m a big believer. I don’t think I would be doing what I do if I didn’t believe in the future of mobile games. It’s much more mature than it was. The app stores, they may change their discovery algorithms and things like that, but in many ways it’s much more mature compared to a few years ago. The real players in the market are much more business-savvy about KPIs, how to do paid user acquisition, how to do marketing. There’s so much competition out in the market.

When you look at it from a consumer point of view, the technology is getting better. Whether you look at emerging areas like AR, what Apple is pushing heavily now—the cycle of how fast technology develops on mobile is pretty fast. That enables new types of opportunities for companies.

In the early days of mobile gaming we suffered a lot from bad connectivity. The speed of connections wasn’t good enough. That remains one of the challenges when you do real time online gaming. You can’t guarantee the type of connection the player uses, but you still need to manage that as a developer or a publisher. That connectivity is only getting better with LTE and 5G and that type of thing. I can already imagine the type of mobile gaming we’ll be able to do in the future.

You’ve probably noticed what Supercell did in London last week with the Clash Royale world championships. Bringing esports on mobile to a mass market, we’ll be seeing more of that in the future. I’ve been totally fascinated with the HQ Trivia type of concept, too. Why watch Who Wants to Be a Millionaire on TV if you can play that and take part yourself?

I don’t have a crystal ball to tell you what will be the top game in five years, but I think we already know that games will be more social. They’ll be more connected. It only helps publishers succeed if you’re able to partner up with big companies like Apple and Google, who also want to find marketing drivers to sell their tech. Apple is very much looking to do that with games and apps they promote. The business is only going to get bigger because of that. We see more competition coming in. Tech development platforms like Unity are helping smaller teams to make games.

It’s hard to put free-to-play gaming into one basket. $50 billion is too big. You have different types of business setups. You have some of these ultra-casual games that only monetize with ads. Maybe some of them are done by one man and a dog. On the other hand you have operations like what we have, or Machine Zone. Look at how big Supercell’s operation has become nowadays. There are different opportunities to succeed in a mass global market.