Yo ho, yo ho, it’s a Pirate Warrior’s life for me.

I’ve been playing Blizzard’s digital card game Hearthstone since it came out in 2014. I’ve played a lot of decks. Some have been more successful than others. Lately, however, I took a small amount of pride in trying to make my own creations work. I wouldn’t just go online and use what everyone else was playing because some internet hive mind deemed it “top tier.” So what if I would lose more? It was more fun to try and be creative. I was proud of myself. And then I started playing Pirate Warrior.

Standard Ranked is the most popular mode in Hearthstone: Heroes of Warcraft. It has players fighting each other with decks that they craft from the standard rotation of card sets, which excludes cards from the oldest expansions. Play well, and you can reach higher ranks. At high ranks, you can earn rewards at the end of the month.

Everyone wants to succeed, and most of those people do so by using the same decks. Even though you can create thousands of different decks in Hearthstone, a handful always rise to the top thanks to their consistent ability to win. And there always seems to be one deck that infuriates other players.

Since the release of the Mean Streets of Gadgetzan expansion early in December, that deck has been Pirate Warrior, thanks to its ability to burn away an opponents health in record time. I play Pirate Warrior. I feel bad about it. I’ve also been pretty successful with it. So, I guess I don’t feel that bad about it. 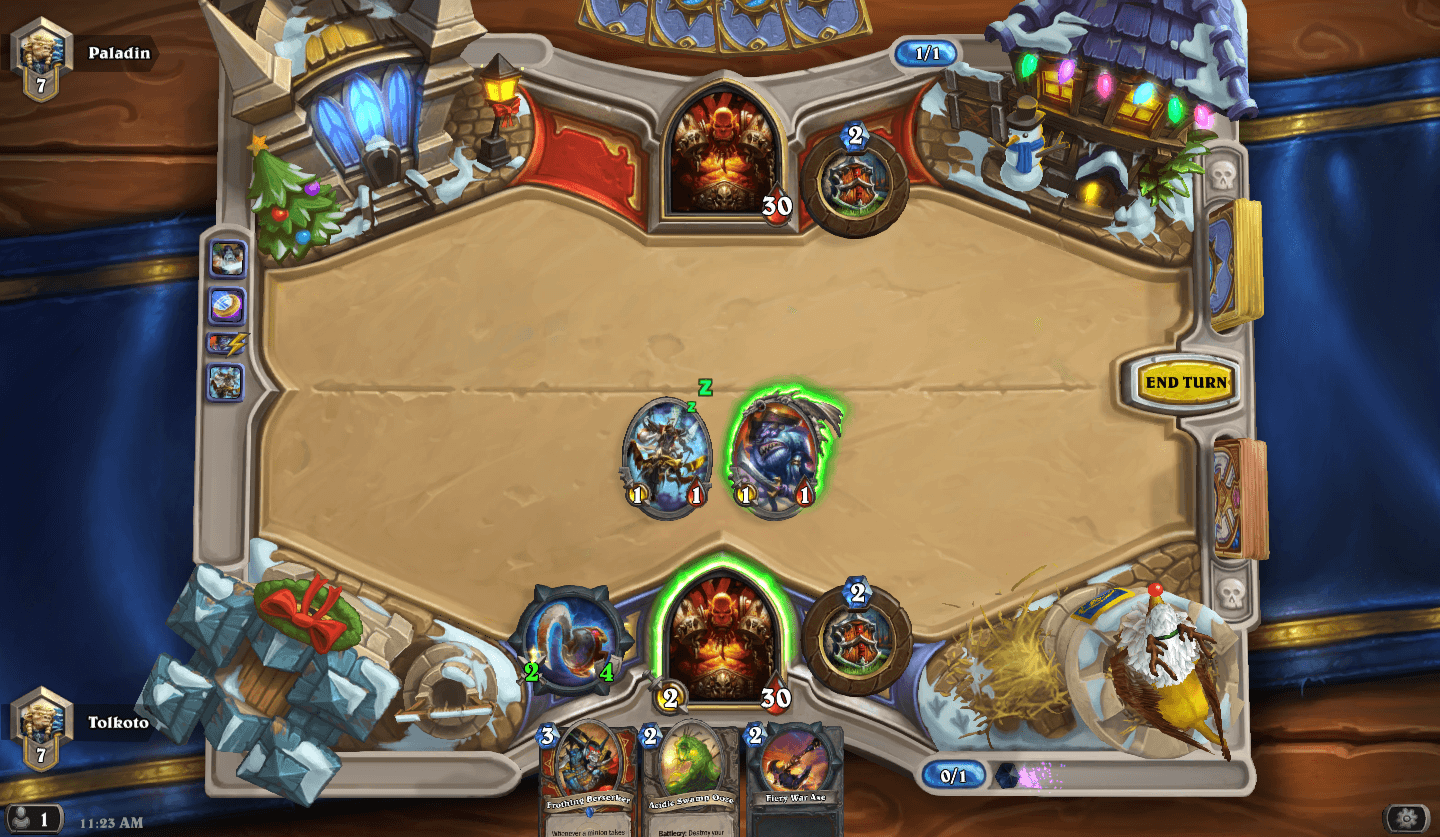 Above: I am a scummy Pirate Warrior.

What makes a Pirate Warrior

Pirate Warrior is an “aggro” deck, which means that it’s fast-paced and focuses on dealing direct damage to the enemy hero. Some players criticize these decks for not requiring as much strategy as slower ones, but others love them because the quicker games mean you climb the Standard ladder faster.

Hearthstone has had plenty of aggro decks before, but Pirate Warrior might be the fastest one that the card game has ever seen. That’s largely thanks to the new Legendary minion Patches. If you play any other Pirate card, Patches will shoot out of your deck onto the playing field. So, as long as he isn’t in your hand, you can summon a Patches for free. His 1/1 stats may not seem that impressive, but having an extra minion on the board in the early part of the game can be a big advantage, especially when it has Charge (which allows a minion to attack the same turn that you summon it).

Small-Time Buccaneer is the other Gadgetzan Pirate card that makes the deck so powerful It’s normally a 1 mana 1/2, but it gains two extra attack if you have a weapon equipped. Warrior has access to a lot of 1 and 2 mana weapons, so that’s easy to do. Basically, Small-Time Buccaneer is often a 1 mana 3/2 by the second turn of the game. That’s insanely powerful.

The rest of deck is filled with other Pirates, weapons, and Charge minions. The idea is to kill the opponent as quickly as possible, before they can draw their powerful late-game spells and minions and before you run out of cards. 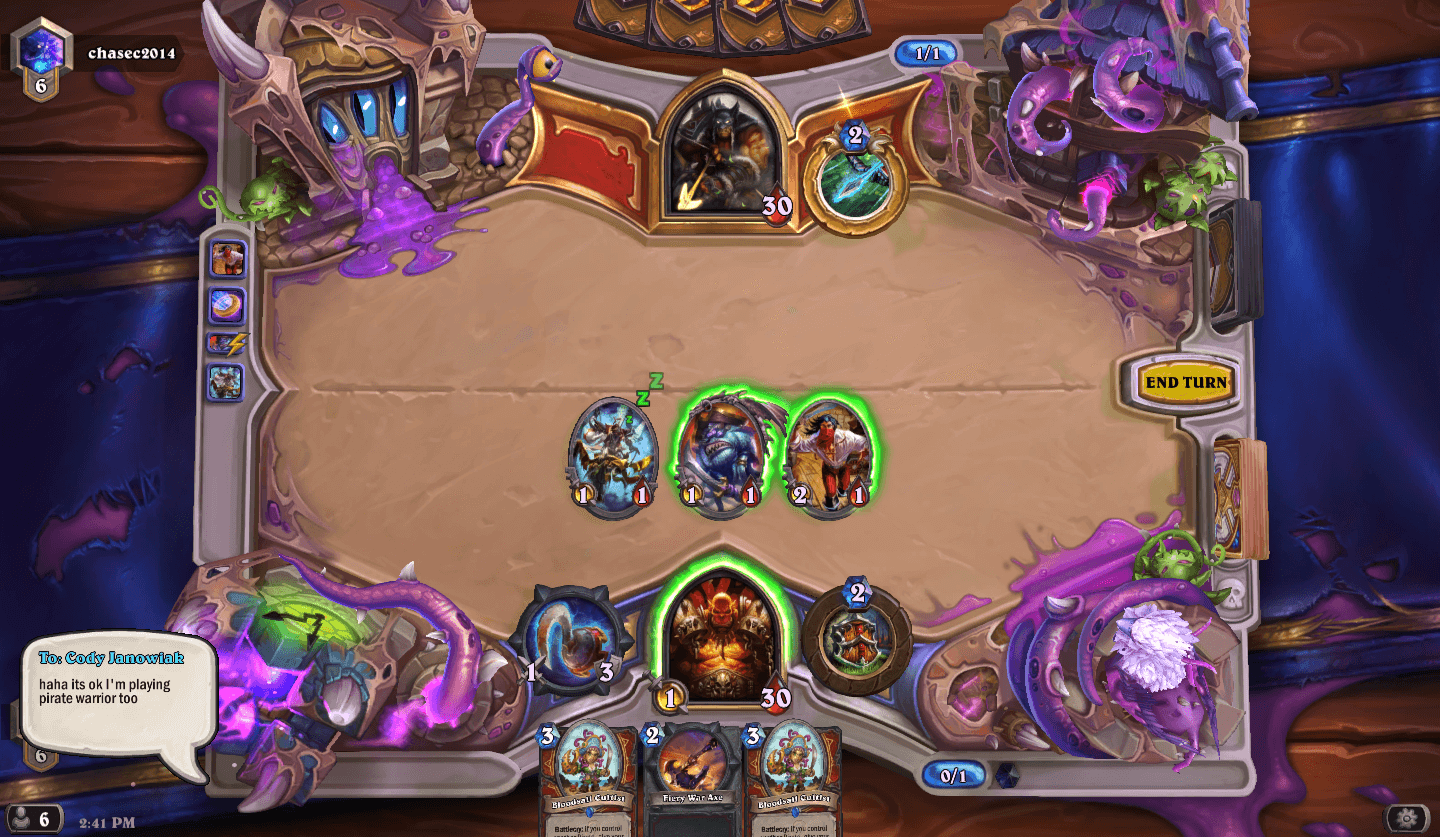 Above: Patches makes it all possible.

How I became a Pirate Warrior

Like many, I initially despised playing against the Pirate Warrior. If they drew well, it often felt impossible to beat one. And then I started playing the deck.

It started innocently. I had a couple of daily quests to complete, which would earn me some in-game gold that I could use to buy card packs. To complete them, I had to play Warrior class cards. I didn’t currently have a Warrior deck. And, well, if I had to play one to complete some dailies, I guess I may as well try Pirate Warrior. It is, after all, a relatively cheap deck to make. It only has two Legendary cards: Leeroy Jenkins, which I’ve had in my collection forever, and Patches, which I was able to craft.

So, I decided to play Pirate Warrior just until I finished those quests. Then I’d go back to playing my complicated combo and control decks. But then I started winning. And the winning felt good.

I was climbing the ladder at a pace I had never seen. I went from Rank 12 to Rank 7 in a couple of hours thanks to one of my biggest win streaks ever. I had long completed the quests, but I couldn’t stop. I was doing too well. Right now, I’m Rank 5. For some, this isn’t that impressive, but this matched my all-time high rank. 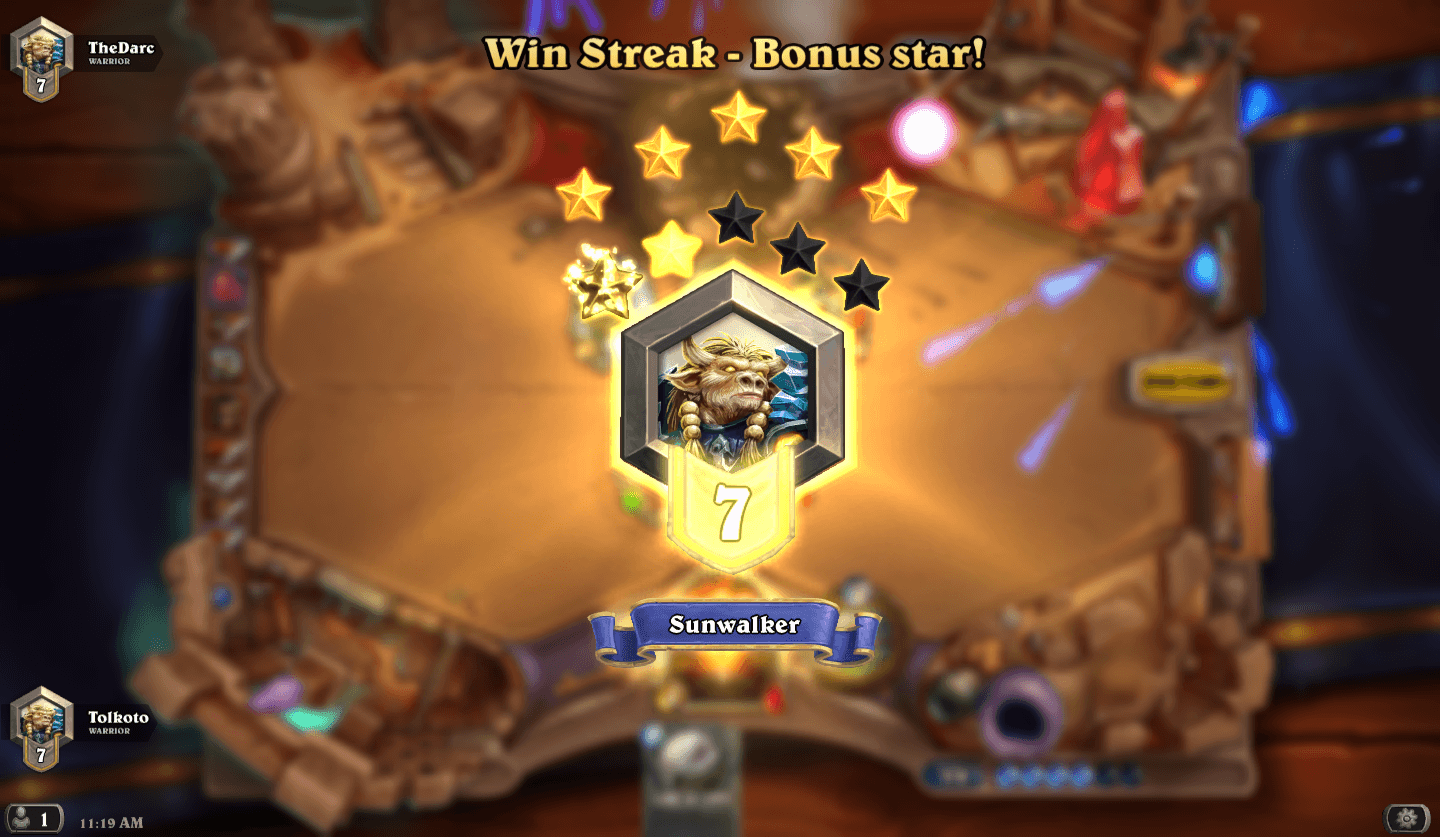 Above: Climbing that ladder feels so good.

OK, it may seem disingenuous to try to defend Pirate Warrior only now that I’ve succeeded with it, but the deck isn’t all-powerful. It depends heavily on you starting with an opening hand, preferably with a 1 mana Pirate so you can summon Patches and a cheap weapon so you can start dealing extra damage. And while you mostly just hit the other players face, you do occasionally need to make strategic trades with minions.

Patches himself can also screw you over. You can only summon him if he’s in your deck. If you happen to get him in your opening hand after you get your mulligans, you’re in a rough spot. Suddenly, a 1/1 minion with Charge that costs 1 mana doesn’t seem very good.

There are also lots of decks that counter Pirate Warrior, especially Reno ones. Reno Jackson is a card that lets an opponent restore all of their health as long as their deck has no duplicate cards. A Pirate Warrior can almost never recover if Reno is played against him. Their only hope is to kill a Reno player before he can play the 6 mana minion on turn 6 (or turn 5 if they have the Coin). Now, Pirate Warrior is such a fast deck that this is actually possible, but it’s unlikely.

Pirate Warrior can also suffer against decks that play a lot of early taunts, like Dragon Priest. And, when playing against other aggro decks (including other Pirate Warriors), winning often comes down to who draws better. So, as annoying as it can be to lose against the deck, it doesn’t ensure victory. 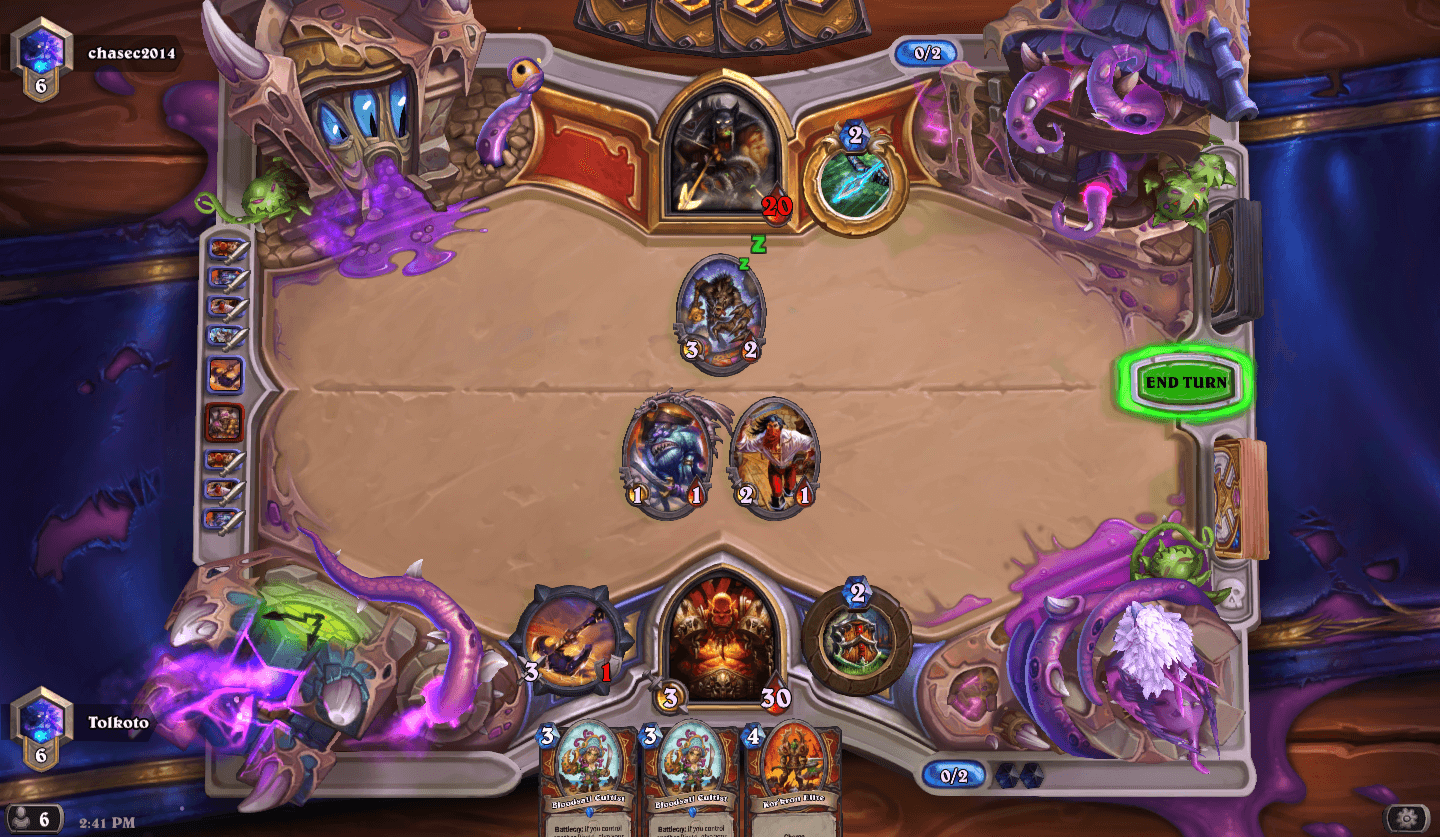 It’s hard to stop playing this deck. Winning so much and so quickly is the best way to climb the ladder. Some day, I want to hit the Legend rank. If I put in enough time with Pirate Warrior, I could maybe achieve that next season.

But would it be a tainted victory? Would others say I didn’t deserve it because Pirate Warrior is too easy a deck? Even if that criticism isn’t as valid as some make it out to be, a lot of people believe it. Will I forever be just another Pirate Warrior scumbag if I keep playing this deck?

Maybe, but I’m having fun. And even if I never make it to Legend, having fun is the most important thing to Hearthstone, even if everyone I play against thinks I’m a cancer to the game.