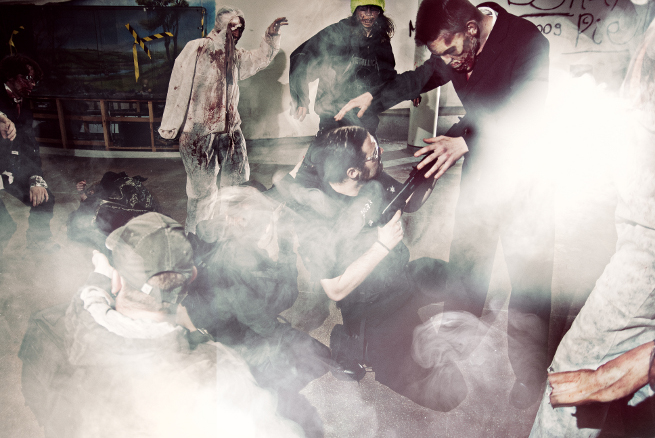 It wasn’t supposed to end like this. Three of us have been separated from the main group and we’re low on ammo. Trapped in an abandoned store, they’re coming at us from all sides. The undead, if indeed that’s what they are can’t be stopped. Even when we take them down, they’re rising up again. With one last gasp we make a break for it, heading into the darkness, shooting fast and aiming for the body, then stepping past the crumpled mess of half-decayed creatures that have been tracking us all day.

Heading down a service stairwell, there’s no time to pause for breath. Torches help light our way but must be used sparingly for fear of attracting unwanted attention. We make tracks for the only safe place in the mall, but as the guttural groans behind us get louder, we know there isn’t much time left. With our hastily scavenged ammo boxes in one hand and shotguns in the other, we finally hit the sanctuary of the safe room, breathe again, and count our blessings. We’ve survived another mission. 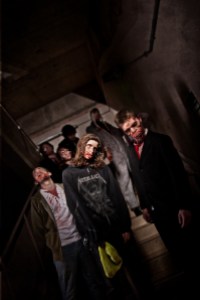 While this may sound like a video game, it’s actually a real-life staged event. Drawing on the rich history of zombie movies and games, such as Dawn of the Dead, 28 Days Later, and Left 4 Dead, Zed Events has crafted a unique zombie experience in an abandoned UK shopping mall that is the stuff of nightmares.

With zombies currently flying high on the cultural radar — see the phenomenal success of The Walking Dead — Zed Events has struck a chord with its latest venture. Making use of a venue that has been tagged for demolition for some years, Lee Fields, Zed Events’ Director, has drawn on years of special effects and event-running experience to bring something entirely new to the experience-day market.

Stephen Pavlovich, co-founder of Wish.co.uk — an experience provider handling bookings for the Zombie Shopping Mall — told me that response to the event so far has been phenomenal. Despite being a world away from other experience days, the Zombie Shopping Mall has been one of Wish’s best sellers, and the company has had to add extra dates in order to cope with demand.

With many visitors from the U.S. due to attend in the next few months, the global appeal of the zombie shopping mall is obvious. Fields is aware of the potential, and told me that he has been in discussion with a number of companies about setting up similar experiences worldwide, with other product and game launches in the pipeline.

VentureBeat first reported on the zombie shopping mall back in March, and when the opportunity arose to try it out in a press session, it was impossible to resist. As VentureBeat’s UK-based representative, I got the chance to try it out.

Dawn of the dead

It started out as a pretty normal day. Even entering the back door of Friar’s shopping mall in Reading, 30 minutes west of London, nothing much seemed amiss. That changed when two heavily armed police officers burst into the waiting area, forcing our fifteen-strong group to the floor, and rapidly briefing us about an infection that had broken out in the town. We barely had a chance to digest this information before we were tooled up with armored vests, torches, water bottles, and shotguns (firing plastic Airsoft pellets), and told we were the last line of defense. 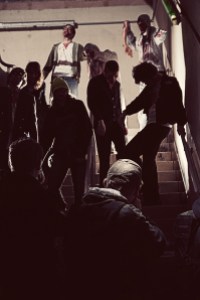 Heading out into the mall for the first time was like stepping into another world. With just two police escorts and limited ammunition, we had no idea what to expect. Creeping along the service hallways in the half-light, our group headed slowly upstairs. Even before we encountered any trouble, a sense of dread hung heavily in the air. Reaching the main walkway, we were greeted by the sound of fists hammering on makeshift barricades, before seeing a third police officer appear and then fall before us — the victim of a sudden zombie onslaught.

This first section of the zombie experience is crafted to offer a completely immersive experience from the get go. Moving through a series of tightly scripted events, games like Resident Evil sprang to mind, as we found a mysterious box labelled ‘Biohazard’ in a cordoned-off basement, complete with flashing blue lights and smoke grenades. There were even nods to Dead Rising, as we witnessed the zombies moving, via CCTV, from the relative safety of a security office, and encountered the infected in a kids’ soft play area (including a male zombie wearing a be-sparkled party dress). Heading for the roof, one member of our party wryly remarked, “If video games have taught me anything, this route isn’t going to be easy.”

Without giving away too many spoilers, it’s safe to say that all of us survived the first part of the experience,  going on to compete in what Lee Fields described as a series of video game style missions. Given the brief of collecting ammo boxes, but not knowing where we would find them, we were sent back into the mall with only our wits and our shotguns to help keep the infected at bay. As in Left 4 Dead, the zombies here came in different shapes and sizes, some faster than others, with armored variations taking significant amounts of damage before they’d go down. 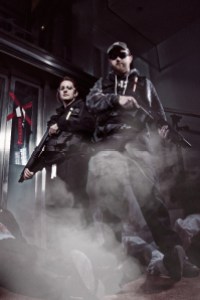 Heading out in small groups, the size and scope of the mall became more apparent, with its labyrinthine corridors, pitch-black store rooms, and damp and foreboding basement area. Sidling around a dark corner, not knowing what might be waiting for us, was a genuinely scary experience.

At one point I found myself cut off from the rest of the group and was herded down a hallway by two zombies, one a soldier who had become infected. Despite their ambling pace these creatures were relentless and I all but exhausted my ammo supply before finally doubling back on them and getting to the safe room.

Survival chances were much higher in a group, but even so our party was overrun numerous times. Powered-up infected came hurtling from the dark, and creatures we thought had been defeated twitched back to life, grabbing anyone walking too close. Thankfully the price of infection was not fatal and, like a video game, it was possible to resupply, respawn, and return to the action.

Being a press session, we were limited to a shortened movie-style adventure and a single type of game mission, but previous participants — back by invitation to relive the horror — spoke in glowing terms about the variety of missions and complete immersion they had encountered in the full experience day.

Even after a cut-down session, when body armor was removed and weapons laid out, everyone had a tale to tell. This was largely a testament to the quality of experience on offer. Maintaining this quality, partly by ensuring that group numbers are kept small, means that tickets are selling fast and bookings need to be made well in advance.

If you’re a video game aficionado or a horror movie buff, forget the Queen’s Jubilee and the Olympic Games — the Zombie Shopping Mall experience is the hottest ticket in the UK this summer.

Tickets for the Zombie Shopping Mall Experience cost £139 ($218) and can be booked through wish.co.uk 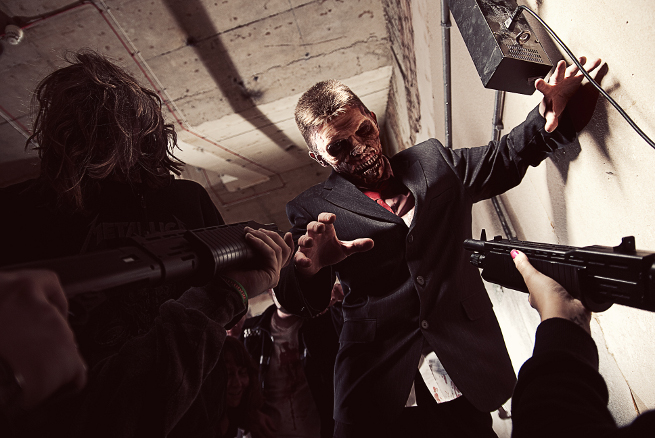