Scavengers aims to be a unique strategic survival battleground game where teams of players fight other teams and also fight off dangerous monsters at the same time in a snow-bound world. It could also be the first major title that shows off Improbable‘s new computing platform for online multiplayer games.

Improbable has had a harder time fulfilling the promise of its SpatialOS operating system for games than it expected. Originally, the company pitched Spatial as a distributed OS that could enable vast worlds that were much bigger than those in current massively multiplayer online (MMO) games, with more characters, flora, and pure square mileage of real estate.

That promise of huge game worlds enabled the London-based Improbable to raise $502 million in 2017 from SoftBank and others, and to raise another $50 million from China’s NetEase in 2018. Many people talked about how it might enable the metaverse, the universe of virtual worlds that are all interconnected, like in novels such as Snow Crash and Ready Player One.

The hype around Improbable was huge, particularly after it raised all that money. But early adopters such as Bossa Studios’ Worlds Adrift and Automaton’s Mavericks: Proving Grounds ran into trouble, and the games were canceled. Regarding those cancellations, Improbable chief technology officer Lincoln Wallen said in an interview with GamesBeat that games are tough to build and developers needed time to learn how to use the new technology.

“Games have all sorts of elements of risk around them,” said Wallen. “Unfortunately, don’t make it to market. Some of them. They get to market and the consumer doesn’t respond. There’s all sorts of reasons they’re risky projects, in the best of times. I would say that some of the lessons which we’ve learned with Midwinter is that development is a process. It’s a creative process. It’s an iterative process. Finding the right end result involves creating more flexibility for the developers in search of that result.”

It didn’t help that, in early 2019, a contract dispute emerged between Unity Technologies, a major game engine maker, and Improbable. The two companies couldn’t agree on contract terms for how Unity’s engine would support Improbable’s SpatialOS. That dispute led Improbable to form an alliance with Unity’s rival, Epic Games’ Unreal Engine.

Josh Holmes, the founder of Kirkland, Washington-based Midwinter, said in an interview with GamesBeat that Midwinter saw a chance to take a shooter game experience to a new level.

“What drew us to the technology is the experience we’re creating,” Holmes said. “We’re trying to create a very large scale PvE and PvP experience where you have 60 players, hundreds of active AI, and a very large scale map. And all of this sort of goes beyond the bounds of what can be achievable on a on a single Unreal server.”

Midwinter is aiming to launch Scavengers in 2021. The game will be on the PC and it will also come to the Xbox One and PlayStation 4 as a crossplay experience. The game has been in development for around four years, and the team originally began working with Improbable toward the end of 2017.

“We leveraged the platform to offload our AI and significantly increase the scale at which we can operate,” Holmes said. “The other thing that technology really allows us to do is be very iterative in our approach to development and look for opportunities to continually expand the scale. We can try out new mechanics that maybe have many more players or have persistence, things like that.” 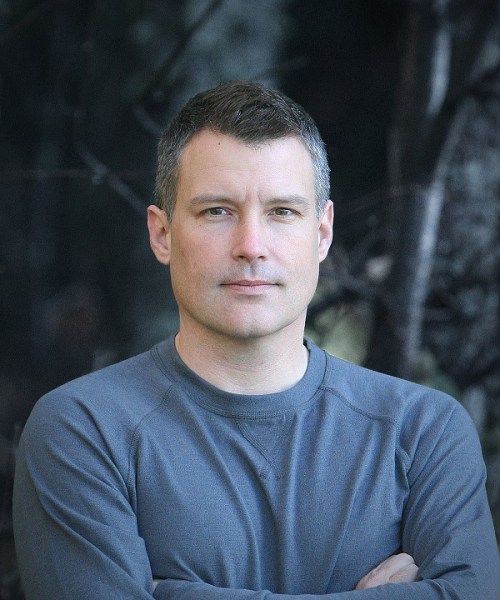 Above: Josh Holmes is a cofounder of Midwinter Entertainment, creator of Scavengers.

Improbable’s networking technologies expanded what Holmes’ team could put inside a game. The game will run on the PC and consoles, and it’s being built with the Unreal Engine for SpatialOS, as Epic Games and Improbable integrated their efforts tightly.

Holmes, a former Halo franchise creative director and 343 Industries studio lead, said that Scavengers takes advantage of Improbable’s SpatialOS in a variety of ways. It is a free-to-play action shooter where squads of three compete to survive and dominate in a hybrid of sandbox-style player-versus-environment and class-based player-versus-player game. The environment is like a sandbox world.

The Midwinter team wanted to use technology that gave it headroom to design the game that it wanted. Three of the four founders came from Microsoft’s 343 Industries studio. On their last project, they had worked on Halo 5 and its multiplayer mode called Warzone. That mode had 24 players and 70 active AI or vehicles at any given time. 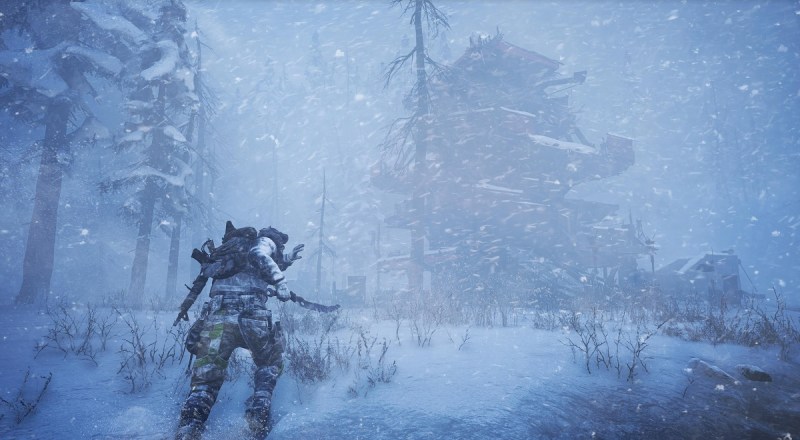 Above: Scavengers will feature dynamic weather.

“We wanted to go substantially higher than that,” Holmes said. “Initially, we were looking at 30 players, and we raised that to 45, and then settled on 60. And actually, our current experience is scalable. So depending on the number of players that join the session, it will scale up and down from a 30 player session to a 60 player session, but we may continue to expand that number. It’s really just around finding the right player density for the experience that we’re trying to build.”

The infrastructure has been honed, Wallen said, thanks to the input from Midwinter. And that means the technology will be ready for third-party game developers to use it more efficiently. In that way, Midwinter could help re-establish Improbable’s credibility with game developers — if the game is successful.

“The relationship with Midwinter has allowed Improbable to follow tried and trusted approaches to creating great technology, which is to put it in the hands of a great team and have them use it, break it, abuse it in order to create a great experience,” Wallen said. “That forge of battle has had a major impact the technology, but not just in terms of its quality, but in terms of the accessibility, the workflows, how a real experienced team would use the technology to get the best player experience out of it.”

Not just a bigger world — a more dynamic one 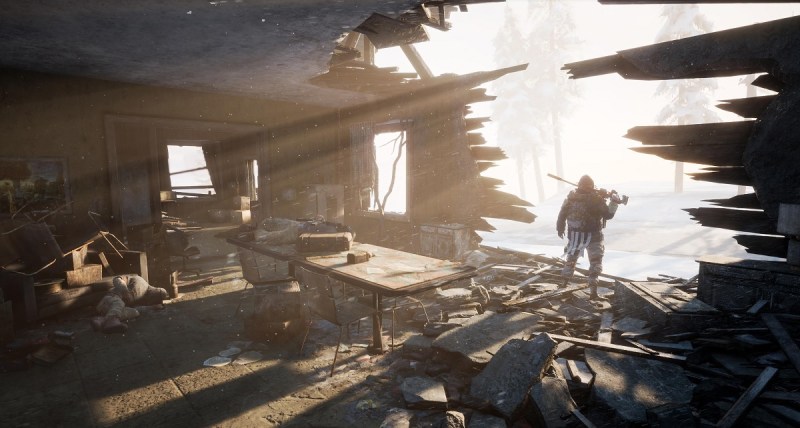 Above: Face the elements in Scavengers.

In Scavengers, players will choose from a roster of adaptive Explorers, equip themselves with unique abilities and weapons, and conquer the challenges of a hostile wasteland. Players have to track enemy players, but they also have to be aware of AI wildlife — and try to pit that wildlife against enemies. They will use storms and shelters to their advantage, and navigate via stealth or hot action. The world will have blistering ice storms that are made possible by Improbable’s technology, Wallen said.

The map is dynamic, with changing weather systems and wildlife. There are many teams competing simultaneously. The teams compete to gather the most objectives and score the most points, rather than kill off the most rivals. Multiple teams can get on a drop ship and escape.

“It’s not a winner-take-all, last-person standing win condition,” Holmes said. “It’s a game where all of the teams are competing to have the most data, collect the most data within a given expedition.”

But the team found it wasn’t all just about creating a gigantic game. Originally, Improbable envisioned games with 1,000 players. Midwinter isn’t pushing that technical limit.

“The original inspiration for technology was how large could that experience be?” Wallen said. “It was precisely the interaction with the Midwinter team that basically revealed how one approaches that scale with practical designs. We’ve discovered that its critical for teams to go to an experience that is not just about a number. The experience has got to be fantastic for the player. So much design that goes into that, and the need to iterate on that design to keep the quality high. That’s actually a bigger challenge than just making technology that can deliver the scale. Technology is great. But actually, in the hands of a real team, you discover so many other things that are critical to exploiting the opportunity. It’s really a creative challenge, rather than technological.” 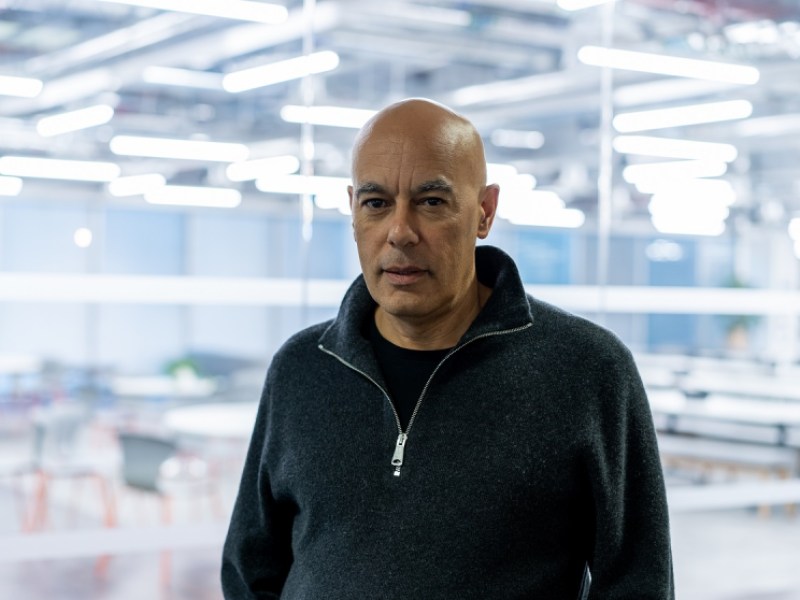 Above: Lincoln Wallen is the CTO of Improbable.

What Midwinter found was a midpoint that gave it a good number of players, smart AI, dynamic environments, and a large map.

“A lot of a lot of it does come down to the fidelity of the experience and where you choose to really focus that fidelity,” Holmes said. “One game may have a very robust and complex physics model that takes a large amount of compute cycles. Another game may have a very simple physics model, but may have more complex AI or shooting mechanics that are at play. All of this is bound by computational power to a degree, as it’s about how much compute you want to throw at a problem.”

Scavengers will have high-fidelity shooting as well as sandbox AI that can make intelligent decisions and coordinate together as a group when hunting players. Holmes said that behavior within a large multiplayer experience will make it replayable and differentiated from other experiences. Players can converge on an objective and try to maneuver the AI to attack the other team.

“I would say historically, when building a game experience, you’re making a lot of those decisions very early on in development and creating the form of what your game is going to be or with those constraints are going to be,” Holmes said. “And then once you’ve built that, and you’ve sort of architected all of your systems around that, it becomes very challenging, to make changes to go to a larger scale.”

With Improbable, however, the team could experiment with moving the constraints around.

“One of the key elements of the Improbable technology is really to take off that constraint,” Wallen said. “You create a development model in which you can make choices about how much silicon goes in support of your experience. And then, of course, the flip side to that is designing in that experience to be really exceptional for the player.”