Peter Parker has grown up. He’s 23 years old in The Amazing Spider-Man, being developed by Insomniac Games for the Sony PlayStation 4. That’s fresh territory for everybody’s favorite web-crawler, and that enables Insomniac to create new lore for its video game, said Bryan Intihar, the creative director on the game, in an interview with GamesBeat.

At the Electronic Entertainment Expo (E3), Sony showed off an amazing demo of extended gameplay from the title, which won’t come out until 2018. Intihar walked us through the demo and said that Spider-Man has mass appeal because he’s a vulnerable character and that the game will show Parker’s struggles and his connection with the world of Spider-Man.

But the game will have to establish an emotional connection with players without rehashing the origin of Spider-Man again as Intihar believes that story has been told and retold so many times in other games and movies. Intihar wants to show us a new side of Spider-Man and the living, open world of New York City that his team is creating. 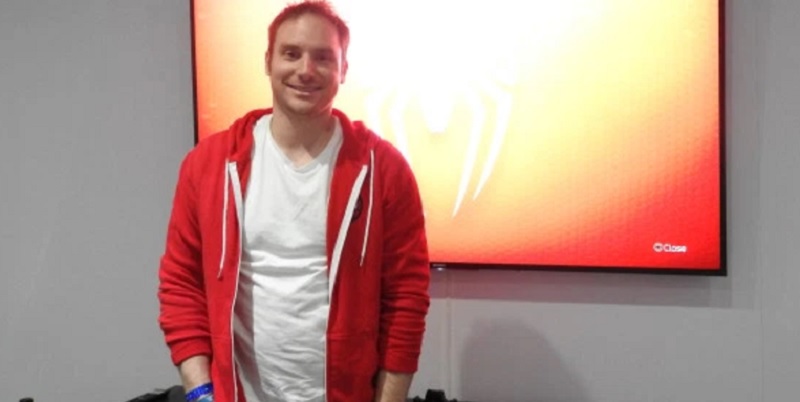 Above: Bryan Intihar, creative director at Insomniac Games for The Amazing Spider-Man game.

Bryan Intihar: I’m creative director on the project. At the debut we talked about—for me personally, and for a lot of people at Insomniac, this game is really important. We’re born and raised Marvel fans, from comics to action figures to cartoons, and now the movies. It’s a dream project for a lot of us. We’re excited about the opportunity.

A couple of things I clarified in the beginning: this is a unique Spider-Man story. It’s not based on any of the movies or comic storylines. We’re creating an original universe alongside Marvel. This is a much more experienced Spider-Man. He’s 23 when the game starts. He’s been Spider-Man for eight years. His level of mastery when it comes to combat and tech—it’s like an elite athlete. But at the same time, there’s Peter Parker. Peter Parker is still trying to figure life out. He’s just out of college, starting a career, and trying to keep his life in order. There’s that constant battle between those two sides of him. That’s something we want to push.

The demo takes place early in the game. Spider-Man’s already locked up Wilson Fisk, the Kingpin. That’s opened the door for a new gang to emerge, the Inner Demons. They’re run by Martin Li, Mister Negative, who Spider-Man knows personally. Martin Li, as we learn in the demo, runs the F.E.A.S.T. shelters in the city, which is where Aunt May works.

That connection between Peter’s world and Spider-Man’s world is an original part of our story. It’s a good example of—hey, there’s something about that character that people already know. Let’s take that and add something new to it. You’ll see that throughout the whole game. 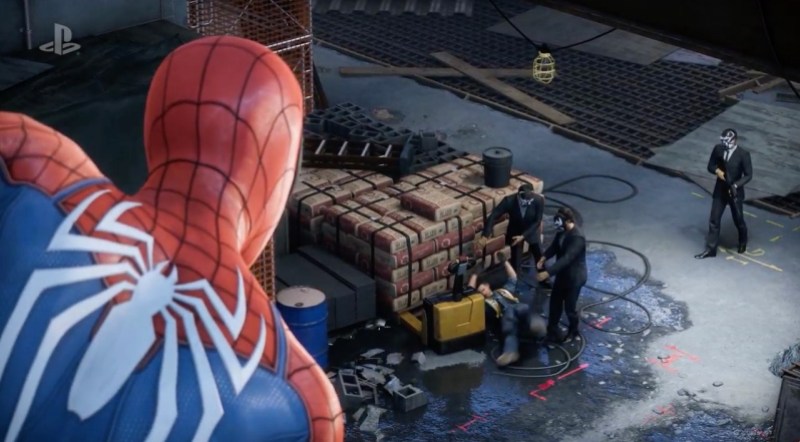 GamesBeat: Do you feel like you’re creating new lore?

Intihar: The biggest thing for us is that—the philosophy at the studio is we want to respect the traditions of the franchise, the DNA of the character, but we also want to mix things up. If we just did the same thing a movie did, or the same thing a particular comic story did, people know what’s going to happen. The thrill is gone. Those are great stories, but they’ve been told already. We want to tell a different story. We want to craft something that makes people say, “I know this is a Spider-Man experience, but I didn’t expect this to happen. That’s an interesting take on something I’ve known for a long time.”

GamesBeat: I’m a big Spider-Man fan, so I’m not hard to hook, but so is my 17-year-old daughter. She’s a big fan of the Spider-Man movies. It’s interesting to me that Spider-Man has this ability to get kids interested, to get women interested. People who aren’t necessarily your standard gamer.

Intihar: That’s why he’s so popular. In some ways—Tony Stark, Iron Man, that’s a great characters, but he’s this super-rich guy. He’s hard to connect to. I love Captain America, but he’s this guy who’s been frozen in time. Peter Parker—something about the character’s relatability and vulnerability, everyone connects to it. He’s not perfect. Our version of Spider-Man has this level of mastery, but he still says things like, “Oh, I hope I don’t screw this up.” “I think I’ve got this?” Deep down, he’s afraid he’ll mess this up and his name will be dragged through the mud, or worse.

GamesBeat: Do you pull any of the origin story in? That seems to be the emotional core of what drives him.

Intihar: I think that story’s been told a lot. But there are elements of the origin that are important to every Spider-Man experience. We’ll have elements of the origin in there without fully telling that part of the story. Like I say, it’s been done a lot, in movies and in games. We have a better opportunity to do something a little bit different. We can take the DNA from that origin, see what about that story works well, and bring that over to our experience. 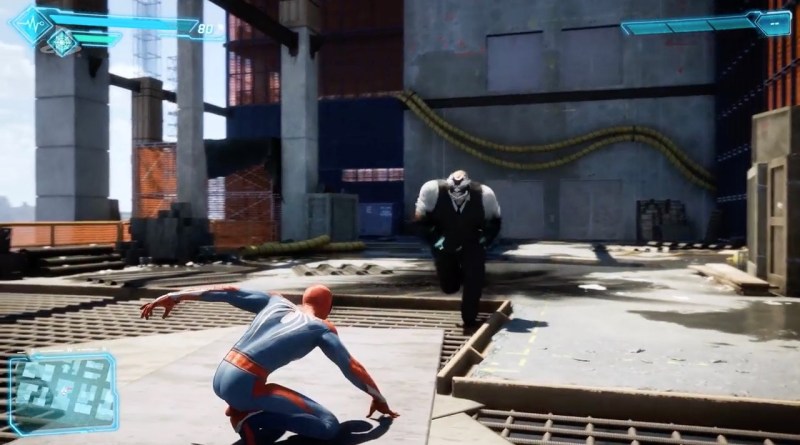 GamesBeat: How do you balance those vulnerable elements of the character with an older version of Spider-Man?

Intihar: It goes back to—by Spider-Man standards he’s doing really well. He’s at the peak of his skills. But I remember when I was 23, just getting out of college. I have to pay bills. I have to make a name for myself. There’s that level of—I don’t have the protection of living at home anymore. He’s not living under his aunt’s roof. He has to make it in the real world. That’s where we get some of that—yeah, I remember that being a tough time. My first job was at EGM, one of the best magazines covering video games in the country. If I didn’t succeed, what was I going to do after that? We want to get some of that.

For him it’s even more complex, because he has this whole other life as Spider-Man. But I think that if we can get the other part right, that’s where—whether you’re a Spider-Man fan or not, you can connect to the human side of him.

GamesBeat: I see a bit of a parallel to Tomb Raider. They got to a character that was so cocky that you couldn’t really connect to her anymore. They had to take her back to the beginning to make her someone vulnerable again.

Intihar: It’s an interesting discussion point. If there’s no vulnerability, there’s nothing to relate to. If everything’s easy, if everything’s a joke, where are the stakes? Where’s the tension? Where’s the emotion? For me, this character is very emotional in many ways. We want to show that in our story – with the way he talks, with the situations we put him in – and really push people to connect with him on a human level. While we’re delivering this awesome superhero experience.

GamesBeat: Going back to the demo, what does happen if you go offtrack a little?

Intihar: We definitely do have fail states. If you don’t keep up with the helicopter, the mission fails. Some of the more cinematic elements as well, obviously. This is a trimmed-down version of the actual mission. You’re saving many more people in Fisk Tower compared to the three you save here. Like any open-world mission, there will be fail states.

Above: Spider-Man on the PlayStation 4 Pro

GamesBeat: So you’ll get used to the idea that you may miss your web shots.

Intihar: It’s important to remember—that’s not every mission in the game. It’s not every time you do something. The majority of the game is the core combat/traversal loop. At points in the story where we feel we need to go more cinematic, we’ll use some of those other techniques.

GamesBeat: How would you say that other games and movies have led you to this point?

Intihar: I’d be foolish not to look at other open-world games, look at what they’re doing well and how they’re telling stories. But you mentioned Tomb Raider. You look at Uncharted. Even smaller games that don’t have huge budgets, they do storytelling really well. That’s one of the magical things about games. It’s awesome that we can have these really high-fidelity characters and big cutscenes, but you can do a lot of things in other ways.

It boils down to human relationships, what makes people tick, whether it’s from your personal experience or other stories. That’s what we’re trying to do: deliver a story that you’ll enjoy and connect to whether you like superheroes or not.

GamesBeat: What was it like getting going on this project? We had a little boom in superhero games at one point, and as more of them came out, more often they got pretty generic. Fans got tired of them. But you have an example here of taking a long time to do one game.

Intihar: Whether it’s comics or movies or TV shows, you look at the way they’ve upped their game. Whether it was the early Spider-Man movies in the 2000s or the Nolan Batman movies or the MCU or the Netflix series they’re doing now, or if you look at games like the Arkham series—people expect more from superheroes now. They shouldn’t just be, “Okay, the movie is coming out so we have to have something on that release date.” Those days are gone.

Right off the bat, we knew we didn’t want to be tied to a movie. No one was asking for that, either. We wanted to make the best Spider-Man experience we could, give it the love and the quality it deserves. The character is so respected and beloved around the world. I see that reaction on my Twitter – people saying, “Thank you. This is it.” That’s a great reaction for E3, but I want to see that when they play the game for hours, too. 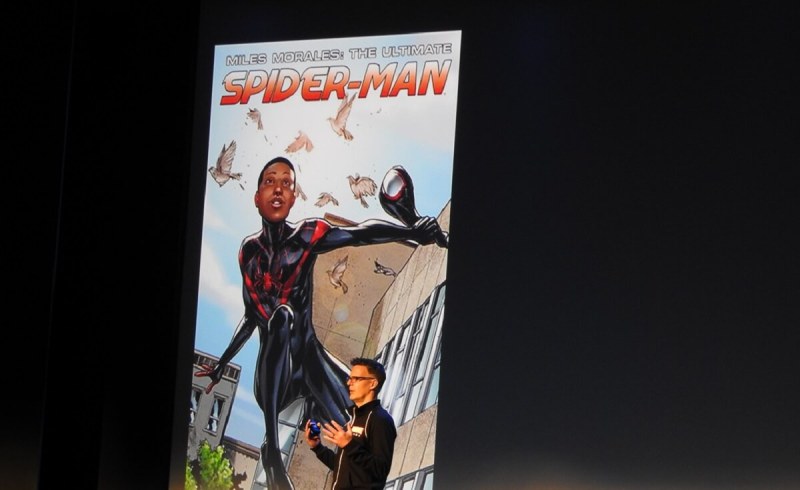 Above: Bill Rosemann shows one of the diverse re-imaginings of Spider-Man.

GamesBeat: You had a reference to Miles Morales. Can you talk more about what that means?

Intihar: You can look at it in a couple of different ways. One, the inclusion of Miles is another sign that this is a unique universe. We’re doing something different. Two, it allows us to tell a Peter Parker story that you haven’t seen. This is still Peter’s story, but Miles will be part of that. Three, this is a character that Marvel fans know, but some others maybe don’t. He’s a super interesting character, and we think that when people are exposed to him, they’ll fall in love with him as much as we have. We’re excited about the opportunity to work with him.