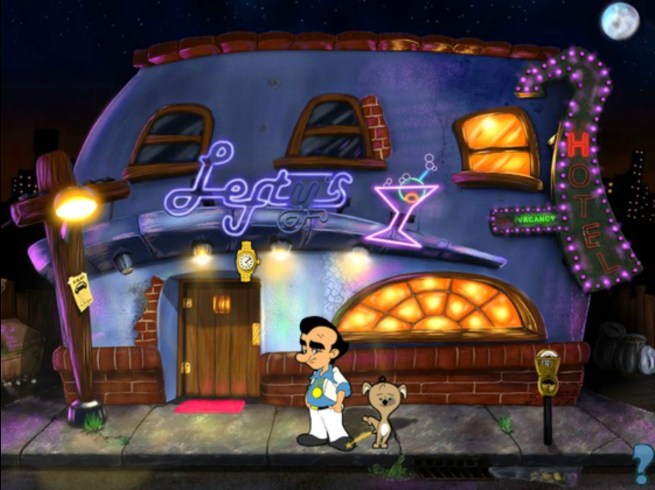 They may seem very different, but both Journey and the upcoming Leisure Suit Larry: Reloaded have something in common: Grammy-nominated composer Austin Wintory scored both games.

“Journey wasn’t the first thing I ever wrote, despite the fact that for most people it’s the first thing of mine that they ever heard,” said Wintory. “I’ve always really relished having musical diversity. It’s like having a diverse meal. If all you ever ate was steak, it wouldn’t be particularly special. And it’s amazing how a salad — not even a fancy salad but an actual mixed greens with some Italian dressing thrown on it — how amazing that can be.”

Wintory made history earlier this week when the National Academy of Recording Arts and Sciences nominated Journey for the Best Score Soundtrack for Visual Media. This is the first time the music for a video game is up for this award.

Leisure Suit Larry: Reloaded is an enhanced update of the original Leisure Suit Larry in the Land of Lounge Lizards. It’s a “mature” comedy game about a sex-obsessed 40-year-old virgin. Its creator, Lowe. returned to helm the production. He and the developers of Replay Games took the game to Kickstarter where over 14,000 backers contributed more than $650,000.

Doing something different after the Journey

“For me, jumping around to different genres has always been a musical obsession of mine,” said Wintory. He points to film composer Jerry Goldsmith (who wrote music for movies such as Star Trek, Alien, and Patton) as an inspiration of his.

“[Switching genres] is musically very important because it’s a palette cleanser,” said Wintory. “It’s jumping into the ice water after being in the hot tub … or maybe you should do that the other way around.”

That may make it sound like Wintory believes it is more important to do something new rather than have a familiar sound, but he insists the two aren’t mutually exclusive.

“I think we often use the terms ‘style’ and ‘genre’ interchangeably, but I think they mean two very different things,” said Wintory. “Everything that I write will always be in my style, because that’s no different than the way I speak or the way that I walk. You can learn behaviors, but there are certain coded, genetic traits about a person. That, to me, is style. Genre is like the outfit that you pick. You’re going to wear that outfit in a way that is you. I’m gonna look a certain way in a suit that doesn’t look like everybody else is a suit. You don’t suddenly lose the ability to identify me based on what I’m wearing.”

Wintory wants to apply his style to a different genre, and the genre gap between Journey and Leisure Suit Larry is yawning.

“I couldn’t have possibly dreamed up a harder left turn than this,” said the composer. “To me, that’s very exciting.”

That explains part of why Wintory is scoring Leisure Suit Larry. The other part is that he is a huge fan of the cult classic. But how did one of the biggest names in video game music end up working on this small Kickstarter project?

“It’s a huge credit to Paul, Al, Josh, and the rest of the team at Replay for even considering that I would do this,” said Wintory. “I’ve had this thing happen, where when talking with other teams about other projects, they’ve said, ‘the guy who did Journey? I thought that guy just wrote sad music? Which is hilarious, because hopefully that’s not the takeaway from Journey.”

“I had been looking forward to Journey for over a year before it launched,” Trowe told GamesBeat. “I had seen it at E3 and behind closed doors, and I’m a huge fan of Jenova Chen and Kellee Santiago. I consider Flower to be in my all-time 10 favorite games. It has inspired me to make games outside of the box.”

When he finally got his hands on Journey, he fell in love with the game, its music, and its atmosphere.

“The musical score [of Journey], it is way more impressive than the music in any other game,” said Trowe.

Trowe and Al Lowe crossed Wintory’s path at the Video Games Live, a concert of game music where Wintory conducted the Journey score and Lowe played saxophone in a rendition of the Leisure Suit Larry theme. Trowe knew at that time that he wanted Wintory, but he talked himself out of asking him to do it right then and there.

“When we got the opportunity to meet Austin and hang out with him at Video Games Live during, I thought: ‘this is a ballsy move on my part, [asking him to score the game], because he’s probably going to say no. Who the hell do you think you are? I just did Journey. I’m not gonna score Leisure Suit Larry.'”

“Which shows how well you knew me at the time,” Wintory said through a laugh.

But Video Games Live passed with no talks of the composer coming to work on Leisure Suit Larry, but Trowe didn’t give up hope.

“I told Al that we have several people that would be good,” said Trowe. “I said, ‘I think Tommy Tallarico would be good, I think Austin Wintory would be amazing, but I don’t think we’re going to get him, especially for our budget.'”

And then there were tons of other suggestions from the development team. And up to 50 people who contributed to the Kickstarter volunteered to do the music. But in the end, Lowe agreed that Wintory would be the best.

According to Trowe, Lowe also thought that it would be difficult to get Wintory. The veteran developer believed Wintory wouldn’t want to follow up a “masterpiece” like Journey by slumming it with the boys at Replay Games.

But Lowe, who is a musician himself, approached Wintory and they hit it off and came to an agreement almost immediately. Importantly for the small studio, it is an agreement that fit the game’s budget.

“There is never a good excuse to do something entirely for the money,” said Wintory. “Creative work requires such a personal investment, that it’s actually immensely taxing if you don’t actually want to do it. And there are some projects you just can’t imagine saying no to, like Leisure Suit Larry, because of their creative potential and because of the wonderful people making them. Working out a budget after that is pure logistics.”

Now, Austin Wintory is the Grammy-nominated composer of Journey and Leisure Suit Larry. And sure, Journey is a powerful and moving score, but fans of Leisure Suit Larry have tons of love for the game’s classic theme. One of those fans is Wintory and he plans to use it and expand on it for Reloaded.