Lara Croft has always been about adventure as the hero of the Tomb Raider series. But ever since her 2013 reboot in Tomb Raider, her story has also been about female empowerment, self-reliance, and determination.

That’s how Noah Hughes, creative director at game studio Crystal Dynamics, approached the design of the character and story for the Xbox One exclusive, Rise of the Tomb Raider, which debuts on November 10. We caught up with Hughes at a Microsoft preview event in San Francisco.

Hughes said the team has enjoyed exposing more of Lara’s character and determination. Scenes with her father help explain why she became so driven to explore and discover the world’s secrets. Lara is still in her formative years, and while she develops as a physical hero, she also grows her intellectual strength and ability to solve puzzles. 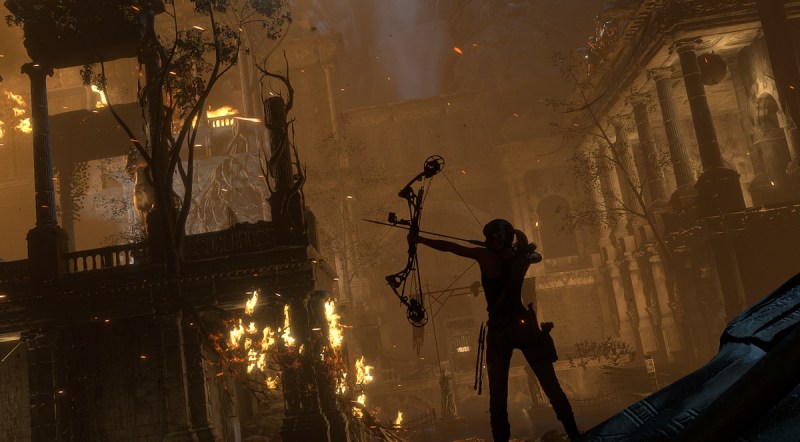 Above: Lara Croft has her bow again in Rise of the Tomb Raider.

GamesBeat: How many Tomb Raiders have you worked on?

Noah Hughes: I’ve worked on all of the Crystal Dynamics Tomb Raiders, ever since Legend.

GamesBeat: What’s your goal this time around?

Hughes: We had a fortunate opportunity in the good reception for the 2013 reboot. We were excited to tell the next chapter in Lara’s story. A lot of that was about taking what she learned on the island in the last game and applying it to a great tomb-raiding expedition. We inspired ourselves with real-world explorers like Edmund Hilary and Tenzing Norgay, who climbed Everest. We wanted that sense of an epic expedition.

Also, as a chapter in Lara’s story, we wanted to show her becoming the tomb raider. This was her opportunity to take those skills that she learned and proactively apply them to unlocking the secrets of the past.

GamesBeat: In Lara years, this would be something like her teen period?

Hughes: These are still formative expeditions, yeah. The first one was sort of the origin story. But we still had room to see her begin to grow into the hero that she becomes. In this case it’s a fulfillment of beginning to realize her identity as the hero.

GamesBeat: What was interesting to me about the last one is, you had tomb-raiding in various places, but you also had this theme of a woman’s empowerment or self-reliance. That was a theme that made the story more interesting. I’m wondering how you carry that onward. When you get to a point where she’s very self-reliant already — by the end of the last game she’s killing hundreds of guys single-handedly.

Hughes: A lot of what we tried to do in the reboot is expose Lara’s character, in addition to taking her on this great adventure. Part of what we asked ourselves this time is, how can we continue to reveal facets of Lara’s character? One thing I love, even in the original Tomb Raider, is that sense of determination that Lara has.

To your point, we expressed that in the last game, but we also have that archaeological brilliance, almost like a Sherlock Holmes or something. She’s an intellectual hero as well as a physical hero. Part of what we wanted to do was reveal some of those other facets, even showing that in game design choices. Things like the language system that celebrate her growth as not just a survivor, but also an explorer of ancient secrets.

Also, we’re trying to get at what makes someone like her tick. I mentioned the Everest explorers. This idea that someone would put their life on the line in order to push beyond the boundaries of human achievement was inspiring to us. We tried to capture some of that human spirit you find in those classic stories of discovery and expedition and infuse that aspect of Lara’s character in this game.

GamesBeat: As far as the locations you’ve chosen this time, did they fit in with that approach?

Hughes: The concept of Lara’s survival skills, the ability to overcome these hostile environments, we wanted to apply that to unlocking secrets hidden in some of the most remote locations in the world. That did play into location selection.

We want a lot of things out of locations. We want an exciting variety of environments. We spent some time in the snow and in the desert, but we also pack a lot more variety into the game than just those two terrain types. We wanted to pick locations that highlight Lara’s ability to find secrets. Siberia and Syria, for their own reasons, are two of the most dangerous landscapes on the planet. It was fun to put Lara in danger proactively there.

GamesBeat: Is there anything in particular that the enemy organization Trinity is modeled on?

Hughes: Not necessarily. We wanted to make sure there were — Lara lives in our world, so most of us aren’t aware, necessarily, of the secrets that truly exist in these dark corners of the world. But we wanted other people in Lara’s world to be aware of those secrets. She has both allies and enemies. Trinity was this idea of, who else would be looking for a secret like this? We wanted to pit Lara against a formidable opponent, in addition to the hostile landscapes. 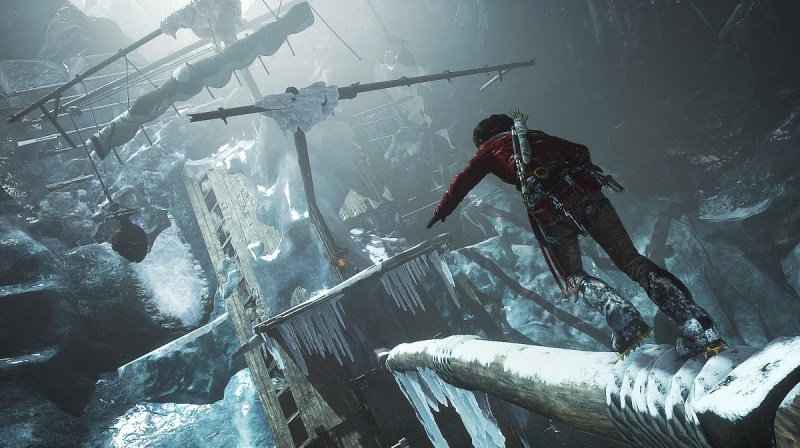 GamesBeat: Her father’s appearance in some of the scenes is interesting. Is he serving a particular purpose in this story?

Hughes: One of the fun things in focusing on Lara’s journey as a character is this idea of, why does someone become so driven to push beyond these boundaries that they risk their life to do it? In particular, we wanted to unravel that from Lara’s perspective.

In a lot of ways it’s expressing a certain passion, a consuming passion. If no one else believes this and it is true, then it’s almost a burden on her. She has to be the one to reveal it. She almost catches the bug. It’s less about doing what her father did exactly, but we see where she caught the bug, where she found that first inspiration in archaeology — ultimately, where she finds that determination to make a difference. 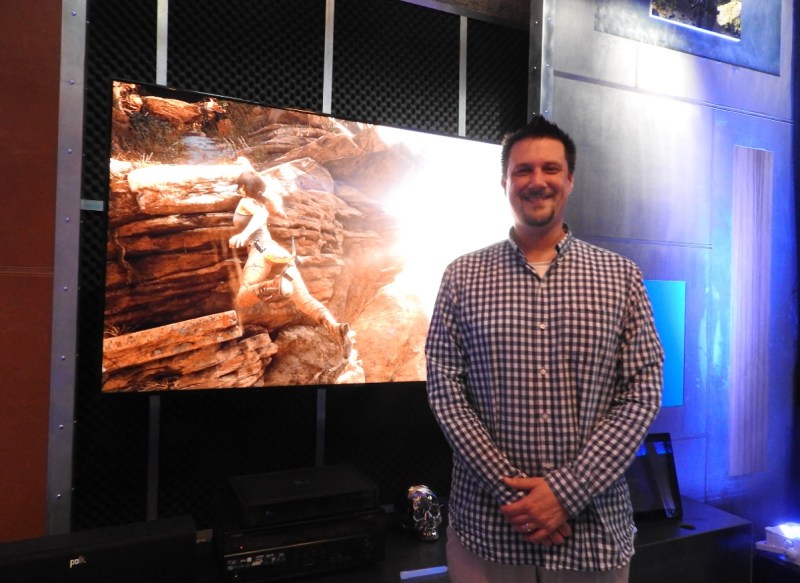 Above: Noah Hughes has worked on Lara Croft games ever since Tomb Raider Legend

GamesBeat: Do you ever find a conflict between more gameplay-focused tomb-raiding and telling a story?

Hughes: One of the exciting things about game design is mashing those two things together — great storytelling and great system design. It’s always a fun challenge. One thing our team does is try to celebrate the best of both worlds. We love these rich experiential roller-coaster rides, but we also love player-driven choice and exploration and the idea of not just being led to the next tomb, but discovering tombs hidden in the world that another player might not have found. We try to take a lot of the sensibilities of a more player-driven sandbox experience and merge them with the pacing and story-driven backbone of a narrative-focused game.

GamesBeat: Some players have seen this kind of experience in things like the Uncharted series. That helicopter popping up reminded me of Uncharted 2. What’s still very different in the Lara Croft experience.

Hughes: Lara as a character is unique and different. We try to celebrate her attributes. Traversal highlights her combination of agility and athleticism. Puzzle-solving taps into her brilliance and archaeological background. Combat leads into stealth and systems-driven choices. We try to craft our systems to support a very mobile character. We like promoting movement. We package a lot of that stuff up through the lens of Lara, which makes it somewhat unique.

But we also, I think, have a unique blend of both openness and story-driven pacing. We find players will often not just play through the story and then come back to exploring. You pace the game yourself by choosing to explore for a little while and then pushing the story forward again. We almost get the best of both worlds in that sense, where you can have the fast-paced roller coaster ride, but you can also just get lost in a world and feel alone and discover things that no one else discovers. 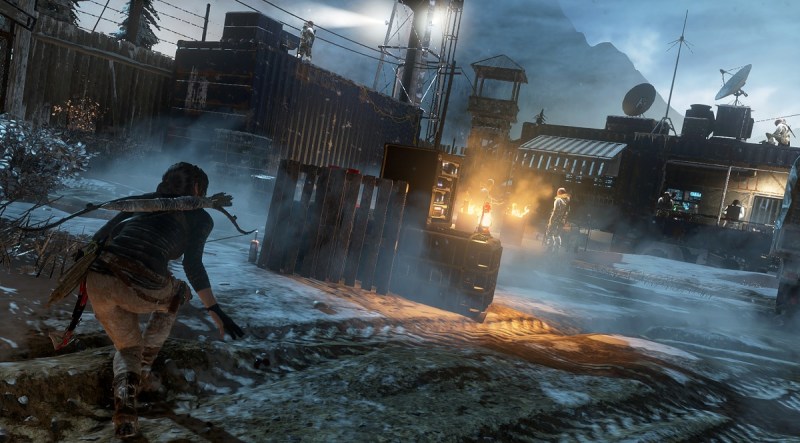 Above: Stealth in Rise of the Tomb Raider

GamesBeat: Do you think you’ve made a leap from the sexy fantasy Lara of the past to a character that’s more broadly appealing?

Hughes: One of our goals with the reboot was the characterization of Lara, celebrating her aspirational nature. We talked about someone who is athletic and brilliant and driven. For me it was fun to continue to use Lara to inspire ourselves to make a better game. In some ways Lara embodies adventure. We wanted to capture the idea of the most fun adventure we could take Lara on, something that showcases her tomb-raiding instincts and her ability to survive and her resourcefulness to start with nothing and build herself back up.

We’re always delivering core story themes, though — perseverance, things like that. It’s our hope to deliver a universal character on a very unique and specific journey.

GamesBeat: We have a lot more women heroes out there, especially this year. You guys were a few years ahead of that trend, or a lot more years, depending on how you look at it. What does that feel like?

Hughes: We’re always excited to represent Lara. We were big fans of Core’s Lara. In some ways I just think of her as Lara, not a woman character as opposed to a man. Having said that, I love the idea of broad representation in games in general. There are lots of different gamers out there. It’s important to have games that cater to all different players. For me it’s more that we get inspired by tomb-raiding and Lara and things like that. But we’re also very supportive of women in games and more diverse games generally. 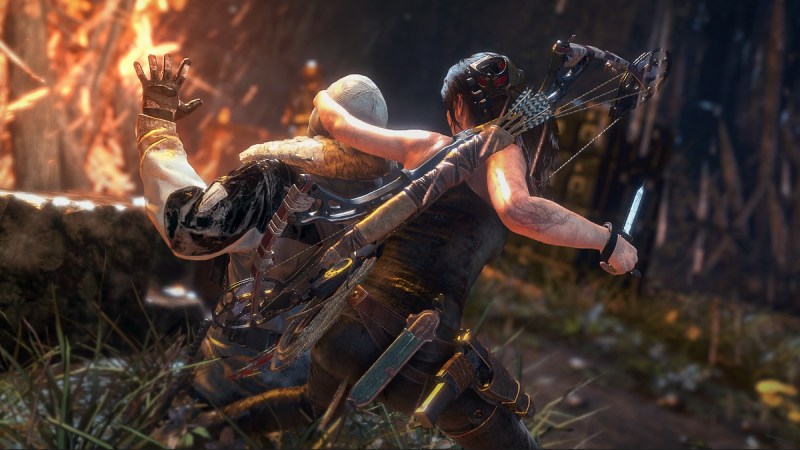 Above: Rise of the Tomb Raider