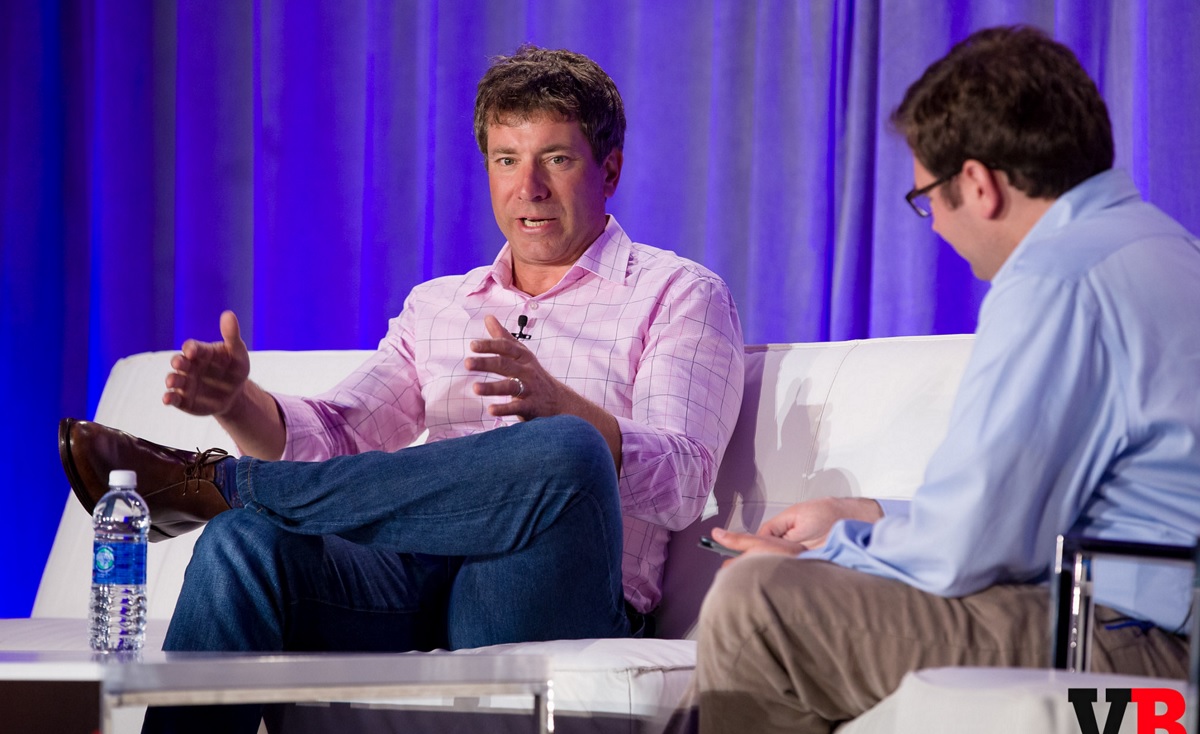 Above: Peter Levin of Lionsgate and Ian Sherr of Cnet.

Levin: I would argue that—again, Jaunt recently raised some capital from established industry players like Disney. But I can tell you, my peers over there are not just looking at that as, “Oh, this is a great way to promote and market our IP.” There will be a degree of that, but demonstrate to me a successful medium where commercial product did not live alongside promotion and marketing.

You go to a film, you’ll see trailers. You’ll see commercials at the theater. You watch television and you’ll see commercials and integrated marketing. That’s actually a sign of a healthy platform emerging, where there’s going to be the coexistence of marketing and promotion right alongside commercial product. At our shop we’re doing a lot of both. We’re taking it very seriously on the commercial side, but working hand in hand with our marketing brethren. That’s a very low-cost way to raise awareness. People are so trained on some of these massive IPs – Divergent, Hunger Games. They’re showing up in droves for that experience. It’s a great way to draft behind, if you’re going to go long on the platform.

GamesBeat: What about esports? I know you just got involved with one of the teams. Where do you see that all play out?

Levin: We’re seeing it play out everywhere. You have everything from ESPN jumping into the deep end of the pool, BBC recently announcing that they’ll air the DOTA 2 championships—there’s now the ability to sell out these venues domestically on par with how quickly they sell out internationally. It’s taking a lot of folks by surprise.

The quality of brands and marketing partners that are jumping headlong into esports—If you think about it, there are very few sports that travel globally. You have soccer. You have mixed martial arts. And you have eSports. American football doesn’t travel globally. Baseball doesn’t. Hockey doesn’t. It’s one of those things where you feel that upsurge.

I’m dating myself here, but as an early investor in GameSpy Industries way back in 1999-2000, we toyed around with live streaming competitive gaming. Back then, bandwidth was not a commodity. Every time we put on one of these events, we lost a ton of money. But it was exciting to see the activity around it. You knew someone was going to build a better mousetrap.

There’s a unique fraternal nature to esports right now. Yes, several of us did invest in a franchise, but with a lot of support from the community. Again, it’s one of those rising tides. Let’s get some folks in there who have backgrounds in sports and media and technology working with marketing partners to maximize those relationships. We’re seeing it come up conversationally a lot.

GamesBeat: When do we say it’s the moment that esports have arrived? Does it take an Olympics, where it gets blessed by a major sporting venue?

Levin: It depends on your orientation. I would say it’s clearly arrived already. Someone like myself, who can operate a bit from both sides of my brain—when ESPN jumped in that was a major thing. The numbers were quite impressive. But I feel that the amount of energy that’s spent online, within social environments, within conferences such as this—last year it was all VR. You could not escape the VR subject line. This year it’s very difficult to dodge the esports bullet. For those of us who’ve jumped in the pool, it’s exciting.

Question: I’m fascinated with the evolution of VR as a medium. How long do you think it will be until VR experiences will feel truly different from movies?

Levin: We have a large library of content at Lionsgate, 16,000-plus titles. We have hundreds if not thousands of horror titles within that library, including Saw. If you can think of a Saw-themed VR experience–

GamesBeat: I’d rather not.

Levin: There’s nothing that terrifies me more than that conceit. We’ve seen some of the demonstrations of what horror-themed VR can be. Trust you me, it is absolutely nothing like sitting back and watching a scary movie. I couldn’t have ripped that thing off my head fast enough.

So my answer to that is, I think it’s coming quickly. Some of it is going to have to be baked over time. There will have to be a tremendous amount of A/B testing. But the best creators in the business, the best writers and cinematographers, they’re all jumping in to play with this. No one sees this as gimmicky. The conversation is not of a novelty. This is yet another medium within which we can do something very discreet. But I promise you, if you’re a fan of horror – I am not – there’s nothing scarier than some of the stuff we’ve seen. 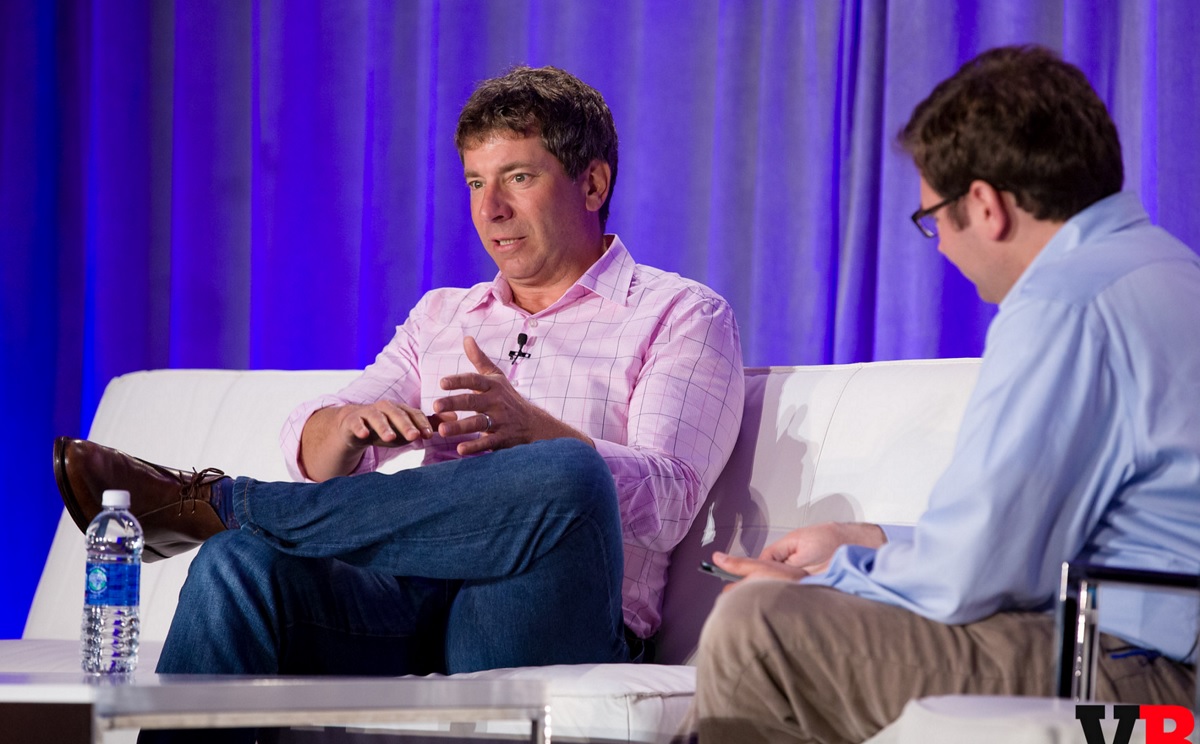 Above: Peter Levin of Lionsgate has commissioned numerous mobile games based on movies.

GamesBeat: Do you think that we’re going to get a two-hour VR movie? I’m going to watch Hunger Games 340 in VR?

Levin: God willing. [Laughs] I’m glad you brought that up, because it’s one of the ways we’ll be commercializing a VR environment – electronic sell-through of our product. You can think about themed theaters. You’re talking about an incredibly sophisticated quality viewing experience. You get spoiled by these home audio/video systems that not everyone can afford. If you are able to buy one of these devices, you’re replicating that experience.

GamesBeat: But I love the theater. I’ve played with the cinema apps, and those are great. But what I’m curious about is, there’s a difference between that and actually being in the world of the movie. Are we going to get to that point, or is that something that’s experiences only? Will the movies remain, “I see it on a screen, even if it’s a really awesome big-ass screen”?

Levin: Again, you’re going to have discrete examples of all of that. There will be creators who say, “No, I want you right there along for the ride.” We’ve seen some of that. You’ll see some monetization of an existing library. We even have contemplation going forward that we don’t want you that involved, that we want a somewhat voyeuristic experience with a much different aesthetic and a more immersive consumption experience. Lots of folks are interested in that.

Question: Video games are traditionally a very interactive medium. Film is obviously linear, with a focus on storytelling. In your experience, are you seeing filmmakers interested in exploring the interactive potential within VR?

Levin: The answer is yes. At Lionsgate we’re investors in Telltale Games. They have their own genre of gaming. Lots of folks doubted them early on, but they’ve clearly done something different, qualitatively and contemplatively. Once we made that investment, so many of the creators and writers we work with were running to us. “Let’s figure out a way to play together.”

We’re getting the same thing with VR. We’re spending a lot of time with these types of folks, and likewise with game creators. There’s a learning curve. They tend to want to get really granular. You’re going to see more and more established filmmakers jumping into the medium. I haven’t seen this kind of frothiness from the creative community about something in a while. It’s nothing but exciting.