If there’s one entertainment frontier that gaming’s biggest franchises haven’t quite cracked yet, it’s the world of licensed theme park attractions. But as the Great America theme park in Santa Clara, Calif., re-opened its gates for the 2016 season this week, it also showcased an all-new attraction for parkgoers to experience: Mass Effect: New Earth.

New Earth — or its full title, Mass Effect: New Earth: A 4D Holographic Journey — is based in the universe of Electronic Arts and Bioware’s multi-million-copy-selling role-playing epic. The ride, which uses a technologically advanced 3D LED display, puts attendees into the roles of tourists visiting the colonized world of Terra Nova on a tourist ship via Mass Relay. A live actor plays the role of the tour conductor (whom fans of the game might recognize as Conrad Verner), who finds himself awkwardly forced into a proactive role as things go horribly wrong and a Reaper attack strikes Terra Nova in mid-tour. Attendees, wearing special 3D glasses, are treated to an exciting thrill ride as they soar through land- and space-scapes; see familiar Mass Effect characters, structures, and locales; and get up close and personal with some scary (and surprisingly stinky) Reapers. 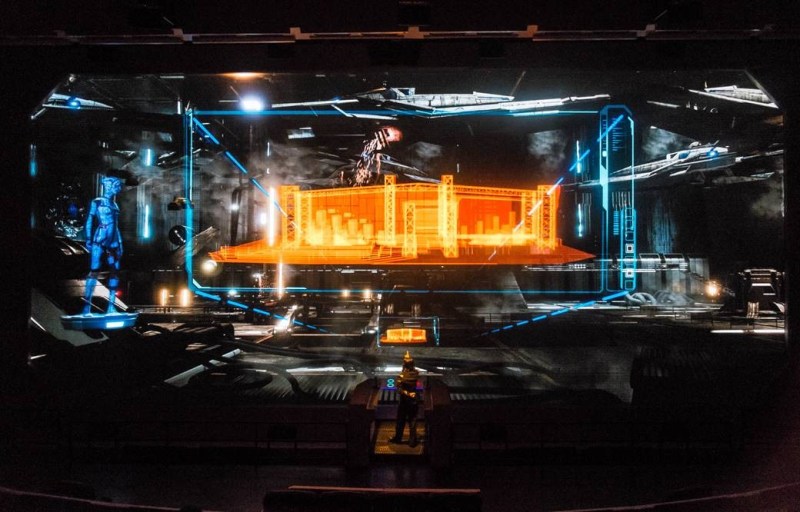 Technically, it’s not the first game-based attraction — that honor actually goes to a ride based on Ubisoft’s Rabbids characters at the Futuroscope park in France, and Universal Studios Japan has done a few limited-time attractions based on franchises like Resident Evil and Yo-Kai Watch. But the 4.5-minute thrill ride is the first of its kind in North America, and it represents an ambitious collaboration between multiple companies: EA, BioWare, Cedar Fair (the owners of Great America and numerous other parks), 3D Live, and Halon.

The 3D technology behind the ride is one of the most impressive elements — but, surprisingly, it wasn’t originally developed for use in theme park attractions. “We were involved in developing this tech back for the Michael Jackson This Is It tour,” says Nathan Huber, co-founder and CEO of 3D Live. “It was going to be the first 3D tour, but 15 days before it shipped out, he passed away, and nobody got to see the tech.”

Huber is no stranger to cutting-edge visuals and technology: He and his business partner were both involved in the production of James Cameron’s movie Avatar. His company spent the next few years refining the technology while also experimenting with game engines and real-time interactivity.

“Our form of [augmented reality] is like a live concert involving this large 3D LED technology to give enhanced Z-space depth, meaning that the 3D is a lot deeper than what you’d see in a movie projection system,” he explains. This allows for performers to be surrounded onstage with detailed 3D holograms and environments.

Eventually, they wound up meeting with representatives from Cedar Fair, who were impressed by the technology. “The next thing you know, we’re meeting up with Electronic Arts and BioWare and conceptualizing the ride,” says Huber. They then brought on a company called Halon to do the CG movies with assets given to them by EA — with BioWare checking in to make sure things kept to the overall vision of the Mass Effect franchise. 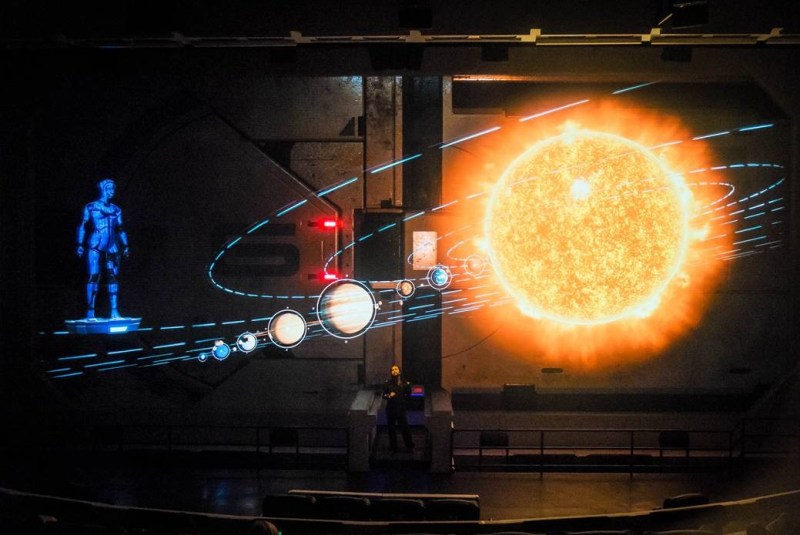 One surprising aspect of the ride’s production is that the visuals weren’t done on a typical CG “render farm” — everything on the screen was created in Unreal Engine 4. In fact, the assets are directly from the Mass Effect titles, which were made in UE3 — though they have been upscaled and enhanced to increase their visual fidelity.

“We used UE4 to do all the renders,” says Clint Reagan, Previz Supervisor at Halon. “[Though] we used Maya to animate and get everything lined up, all of the renders and lighting were done in UE4 … . We’ve been starting to use game engines as rendering platforms instead of going the render farm route.”

This approach allows for a much speedier turnaround and makes adjustments and fine-tuning of the cinematics a cinch. “The speed of iteration [is an advantage]. We didn’t need to send [the cinematic data] out and wait to see it. We could pull it up, look at it in 20 minutes, make a note, and change it again … . It really helped us spend more time working on the image rather than waiting on the image.”

Electronic Arts, meanwhile, views the ride as an expansion of of one its biggest intellectual properties and a big step for the company. “We’d been exploring theme park stuff for a bit. We’d been talking to people both here [in the USA] and internationally,” says Patrick O’ Brien, the vice president of EA Entertainment. “When we met with Cedar Fair, they brought us down to [Los Angeles] to look at the the 3D Live technology. And we loved it … . We then brought BioWare down, and we all agreed that it would be a great partnership that would do Mass Effect justice.”

“It’s an epic, story-driven universe,” O’Brien continues, “and we knew that in a theater setting, whatever was created would be a story with set pieces.” He also acknowledges the fervent Mass Effect fanbase eager to see a favorite story universe brought to life. “Based on our experience — whether it’s with anime, comics, figures — we knew that if we make great stuff for those fans that they would want to [experience] it and talk about it.” 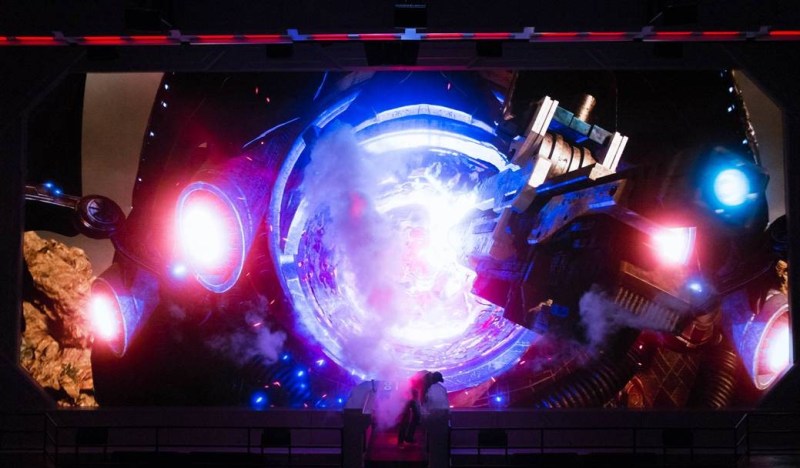 Even people who might not be familiar with the IP will be impressed, O’Brien says. “It brings [attendees] an awesome 4D experience … it’s just a great theme park attraction. I think it creates an awareness of the Mass Effect universe. Hopefully, it makes people more interested in it. Whether or not you know [the setting and the characters], you’re going to have a great time.”

Mass Effect: New Earth is a pioneer in the world of gaming-themed park attractions, but it doesn’t look like it’ll be one of the few for long. Nintendo’s been making some overt moves into the arena as well, inking a deal with Universal Studios and restructuring the company to facilitate development of attractions and other entertainment ventures. Ubisoft is looking to open its very own theme park in Kuala Lumpur, Malaysia, as well.

As gaming franchises transition into being bigger, broader entertainment properties, we’ll be seeing more and more games make the leap into mass-market amusement attractions — and being accompanied by their own unique technological leaps.