It’s not easy to follow in J.R.R. Tolkien’s footsteps. The legendary author is responsible for creating Middle-earth and the thousands of years of history behind it. It seems like the perfect backdrop for a video game, but wading through that wealth of knowledge is incredibly tricky. No one wants to be known for botching the legacy of The Lord of the Rings.

That’s the impression I had after talking to Bob Roberts, the lead designer of Middle-earth: Shadow of Mordor, which comes out Sept. 30 for PlayStation 4, Xbox One, and PC (Nov. 18 for PS3 and Xbox 360). The folks at developer Monolith Productions are huge fans of the books and films, so they obviously knew what they were getting into. But making sure that their ambitious third-person action game works and plays smoothly was just one part of their job.

The other half — making sure its representation of Middle-earth was as authentic as possible — was equally crucial, and Monolith sought help from a few Tolkien experts to make that happen. 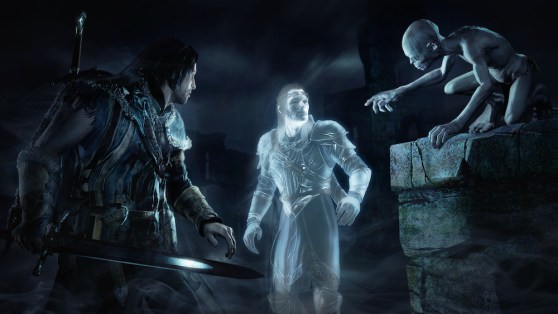 Above: Talion, Celebrimbor, and Gollum discuss their plans.

One way that Shadow of Mordor ties back to the books is through its use of Celebrimbor as a major character. The renowned Elven blacksmith directly contributed to the War of the Ring: He forged the Rings of Power under the influence of Annatar, who was really the Dark Lord Sauron (creator of the One Ring “to rule them all”) in disguise. After being dead for a number of years, Celebrimbor returns in Shadow of Mordor as a powerful wraith who’s inextricably linked to your character, Talion.

Monolith collaborated with The Lord of the Rings license-holder Middle-earth Enterprises on its depiction of Celebrimbor — and of Sauron and any other existing figures and locations. The story couldn’t contradict what Tolkien wrote about in his books. Middle-earth Enterprises vetted all of Monolith’s ideas and scripts before sending back any notes.

“But in terms of the big ideas, we basically [told the licensee], ‘Here’s what we want to do with Celebrimbor, and here’s why we think it fits within the canon. … It doesn’t conflict with anything,’” said Roberts. “‘It’s not trying to tell a different version than what’s out there. It’s filling in some gaps, and sort of illuminating a part of the past that people don’t know about, or wasn’t written about. …’ And they basically said, ‘Yeah, that looks good.’”

Going back and forth between the different books to maintain continuity was a “rigorous process” for Monolith’s fact-checkers, especially since Tolkien often revised his early work to make sure that some elements stayed consistent with his latest books.

“That’s part of why we have Middle-earth Enterprises, too,” said Roberts. “They’re checking on that stuff for us as well. So we have multiple sets of eyes in case one of us missed a detail or overlooked something.” 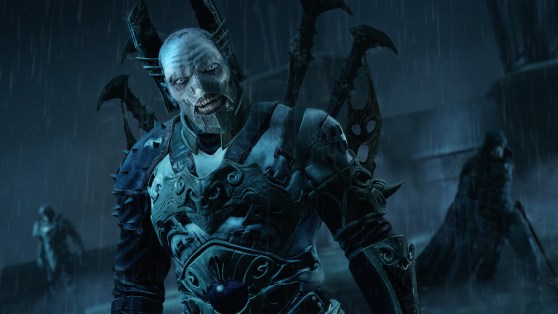 Above: This Black Captain is one of Sauron’s deadly servants.

If you at least saw the films, you know how subtle and intricate the Elvish languages are. Something that might sound less familiar to you is Black Speech, the language Sauron created for his henchmen in Mordor. Unfortunately, the books don’t have too many instances of it being spoken beyond just a few words and the inscription on the One Ring.

So to make sure that its orcs spoke in the proper tongue, Monolith brought in David Salo, a self-described “Tolken language student” who worked as a translator on both The Lord of the Rings and The Hobbit movies. The developers “bounced a lot of things” off Salo, and sent him bits of dialogue to turn into Black Speech (much of it depending on Salo’s own inference).

Certain words and metaphors from the English lines didn’t always survive the translation.

“One of the cool things about the Black Speech translations is that they fit the culture of the orcs more,” said Roberts. “If you get that direct translation, it’s not necessarily as flowery or metaphorical as the English might’ve been when the writer wrote it. [Salo] does a cool job of making it fit more of the Orkish mindset … .”

I asked him for an example, but the only ones he could think of were from important scenes in the game. The following clip, however, gives you a good idea of what Black Speech sounds like. It’s from the extended edition of The Lord of the Rings: The Fellowship of the Ring.

For the Tolkien scholars out there, Shadow of Mordor’s Black Speech could also serve as an interesting challenge. Roberts wants to see if someone will try to re-translate the lines back into English.

“I think it’d be cool to see once we release if people deconstruct it and go, ‘OK, the subtitle said this thing, which is what the English writer intended. But if you’re really careful about reverse translating the Black Speech, here’s what it said,'” said Roberts. “It gives us a slightly differently flavor that’s more authentically Orkish. It’s cool stuff. I hope people dig into that and post it up online after we launch.” 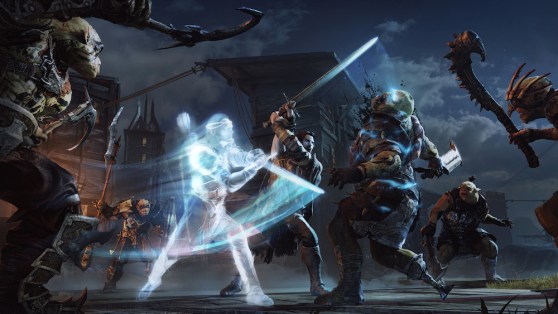 Above: Celebrimbor and Talion fighting a wave of orcs.

Loyal, but not obsessive

As excited as the team was with playing with the lore, Roberts said that sometimes, they had to take a step back and make sure they didn’t over-explain everything or obsessively describe small details that only hardcore fans would appreciate. Helping them in this regard was writer Christian Cantamessa, who previously wrote and designed Red Dead Redemption.

Cantamessa had a “very clean, modern take” on Shadow of Mordor.

“When Christian’s writing the main story, he’s helping keep us grounded in terms of not going off the deep end, lore-wise, but keeping that lore as part of the underlying structure of how the world works,” said Roberts. “Keeping that surface layer of the story accessible, like [creating] natural interactions that people would have [in the real world]. … [The characters] would have clean, believable relationships, and the details would just be informing their performance rather than the actual dialogue.”

Despite how careful Monolith was in making Shadow of Mordor — earning the approval of Middle-earth Enterprises and piecing together bits of a fictional language with Salo — it can never say that the game is officially part of the canon. Only Tolkien’s words and ideas hold that honor.

“We’re just telling the best story we can,” said Roberts. “And if people decide that it makes sense and fits and becomes part of their Middle-earth ethos, than that would be amazing.”