When he was a child, John Hanke was obsessed with pull-out maps from National Geographic magazines, spending hours poring over names and topographic features. So in some ways, it makes sense that the Niantic CEO wants to help map the entire world with augmented reality.

At the Game Developers Conference 2019 in San Francisco, Hanke talked about why developers should continue pursuing AR, and how it can be a force for good if done right. Niantic popularized consumer AR through location-based mobile apps like Ingress and Pokémon Go, and is applying that expertise to the upcoming Harry Potter: Wizards Unite. One thing that all three games share in common is that they’re part of Niantic’s overarching mission of incorporating AR into the world in a fun and interesting way.

But that’s just scratching the surface of AR’s potential.

Ultimately, Hanke and his company are thinking beyond games. He envisions a future where AR — through glasses, specifically, and not our phones — can enhance our lives, whether it’s buying a ticket for a bus ride or just trying to find out more information about a historical building. But the technology has a long way to go before it gets to that point. That’s why Niantic has just as many people working on Pokémon Go as it has on its Real World Platform, the backend technology that powers all of its games. 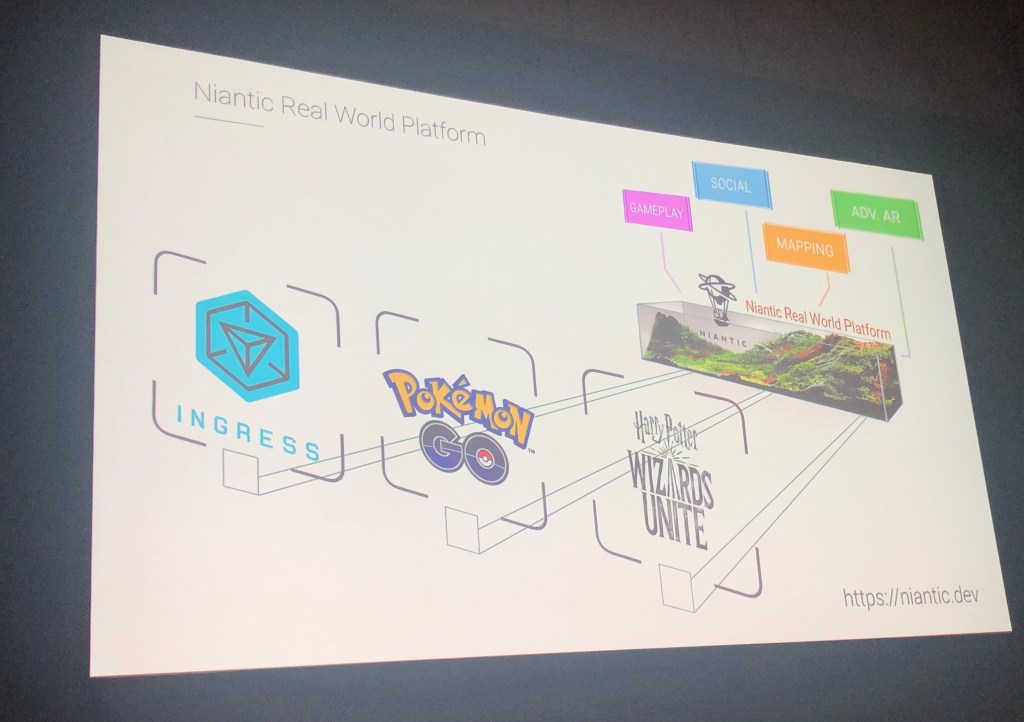 Above: A visualization of Niantic’s Real World Platform at GDC.

A key part of that platform is what the company calls Advanced AR, which Hanke described as a “common layer” between Apple’s ARKit and Google’s ARCore technologies. It also taps into the AR Cloud, which will create better and more believable shared experiences (like the public events Niantic creates for both Ingress and Pokémon Go). Niantic recently invited developers to create new AR experiences with the platform through its Beyond Reality contest.

However, Hanke told the audience that AR alone shouldn’t be the main draw when it comes to creating their games, citing inherent limitations of playing on our phones.

“AR in and of itself is not a magic bullet for a hit game. There are some real drawbacks to it,” he said.

Niantic found that the ideal play session (when holding up the phone in AR mode) is between two to three minutes. The majority of the game, Hanke said, should still take place outside of AR. Companies must also be mindful of the social stigma that comes with this — when holding up your phone to your face, the people around you might think you’re filming or taking pictures of them.

“We think the right approach here is to design things for AR that really can’t be done outside of AR,” said Hanke.

Investing in the future

The AR seen in Niantic’s games is a crude implementation of the technology, with Hanke comparing it more to a “parlor trick” than a believable hologram. In Pokémon Go, the Pokémon aren’t aware of their real-world surroundings, and can’t climb over objects or hide behind them. The next generation of AR, Hanke said, is all about connecting these “bits” (the holograms) and the “atoms” (people and objects in our world) to create a more immersive experience.

For that to happen, Niantic and other companies must work together to build a persistent AR map that covers the world. With this map, developers can tie the holograms to specific locations, and then feed that data into players’ phones so that they can find the “bits.” Multiple people can gather around one of these areas and participate in the same AR experience in real time. Niantic has already started experimenting with this idea internally with projects like Codename: Neon, a fast-paced game where players gather energy pellets and use it to attack one another.

Another project, Tonehenge, encourages people to work together to solve intricate Myst-like environment puzzles. To add to the ambiance, the game dresses each player in fantastical masks and cloaks.

“We want to create believability. We want to make these atoms and bits indistinguishable from one another. That’s the ultimate goal,” said Hanke.

Both Tonehenge and Codename: Neon aren’t quite ready for prime time. Hanke said that current 4G mobile networks aren’t good enough to ensure the low latencies needed for these multiplayer games. But with 5G services on the horizon, deep AR experiences will become more viable. It’s much faster than 4G and also supports a greater density of people per cell tower, making it perfect for the big social gatherings Niantic likes to host. The studio is already working with several companies — Deutsche Telekom, SK Telecom, and Samsung — to see how their respective 5G networks can benefit its products.

Between the games, its R&D teams, fundraising rounds, and the ever-expanding Real World Platform, Niantic is preparing for a future where AR will be ubiquitous. Hanke said that AR can “deepen our appreciation and understanding” of our world, providing helpful information or services as we go about our everyday lives. That’s why he thinks it’s worth the time and money to understand AR now before it takes off.

“I think it is one of those platform shifts you see once every 10 to 20 years. I’ve lived through a couple: we saw PCs, we saw the cloud, we saw mobile. I think AR is one of those shifts,” he said.

It’s a shift that Hanke has been anticipating for a long time, and he wants to make sure Niantic stays at the forefront of that technology through its games and innovative experiments.