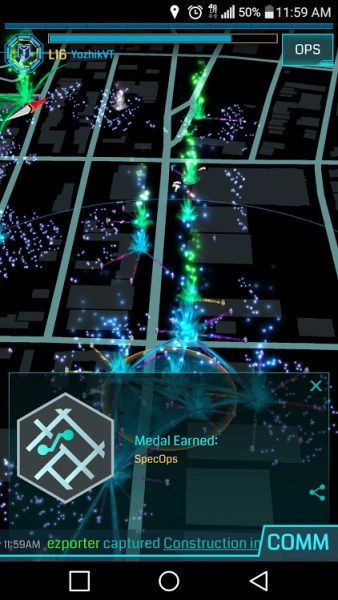 Above: A screen showing the action in Ingress.

GamesBeat: How many people are here now?

GamesBeat: Still pretty small for what you’ve set yourselves up to do.

Quigley: One thing I’d add to your points about Pokémon Company and Nintendo — for two and a half years, the platform aspiration has been front and center. John’s talked about it a lot at DICE and other places. They’re fully aware and supportive of that. It’s not just a dev for hire thing. They know where we’re going. They know what true north is. This is ultimately about the platform and enabling lots of other games to do this. To me that’s good. It’s what we wanted to do on day one.

GamesBeat: I know you guys aren’t restricted by the investment, but now it seems like a lot of different kinds of games could work on top of this engine.

Hanke: Part of what we’re trying to do is show people that breadth of gameplay styles and genres you can fit into this real-world gaming category. Ingress is one data point. Pokémon is a data point. There will be some other interesting ones as well. It’s been fun to watch the phone ring after the Pokémon announcement.

GamesBeat: Now you get a real test of what it can do with a gigantic brand associated with it.

Hanke: Absolutely. People are already familiar with certain aspects of the game. With Ingress, thankfully, we were able to launch it from within Google. It’s a pretty tall order. We were using a brand-new fiction and a brand-new style of gameplay. We started from scratch. It’s a lot to educate people about with games like this, just like any other new platform. VR has the same challenges. What does it mean to make a game for this kind of device or experience? How is it different from things that have come before? The consumer education process takes some time and effort.

GamesBeat: The theme of our next conference is “David and Goliath.” I’ve been asking people, to what degree do you feel like either one? That was the thing about the Malcolm Gladwell book I just read, that advantages are disadvantages and vice versa. Everyone is both David and Goliath in some way.

Hanke: It’s always more fun to be David. I’ve always identified as David personally, as an entrepreneur. It’s more fun to be the underdog and try to surprise people and do something unexpected as the path to success, versus just pounding away as Goliath. At the same time, coming out of Google — in terms of our expertise with location and maps and things like that, people may perceive us as a bit of a Goliath. We have a lot of experience in that area.

We feel good about our competence there relative to other people who might be interested in the space. Maybe there’s a bit of both. But for the time being we’re coming into the industry that something I think will be disruptive. We’re throwing our stone.

GamesBeat: Do you think that there will be more entrants into this location-based MMO space?

We’re one influence there. We have Magic Leap and Microsoft and HTC and other companies all doing augmented reality devices. We don’t need AR devices for our game, but they would make our style of game even more exciting. As they come into the market they’ll need launch games that showcase what their hardware can do, why playing a game on HoloLens or Magic Leap is more, better, different than traditional games. As those companies start understanding what it means to build an AR game, they’ll realize that a lot of what we’ve done with Ingress and Pokémon Go has the elements that showcase why those kinds of hardware experiences are going to be different and better.

Maybe we’ll partner with some people to make some of those. Maybe they’ll do their own. My point is, you have a lot of people making big bets on augmented reality. They’ll focus a lot of money and energy on the sector.

GamesBeat: How long do you think the sector will take to get going and have a successful device? What challenges will they have to overcome?

Hanke: To some extent we’ve already had some initial entrants. Google came out with Google Glass. It looked awesome in the lab. It hit some massive roadblocks in terms of what it could really do, functionally, as well as the consumer reception of it. Which I think was tied to a lack of clarity about what it could really do and what it does well. Google learned from that, as did everybody else in the industry watching that unfold.

Magic Leap is coming. Microsoft is there. HTC is going to build AR. I’ve seen some interesting stuff from other companies. It’s really hard to predict exactly how long it’s going to take. I think it’s more like four to five years than two to three. But I don’t think it’s 10. 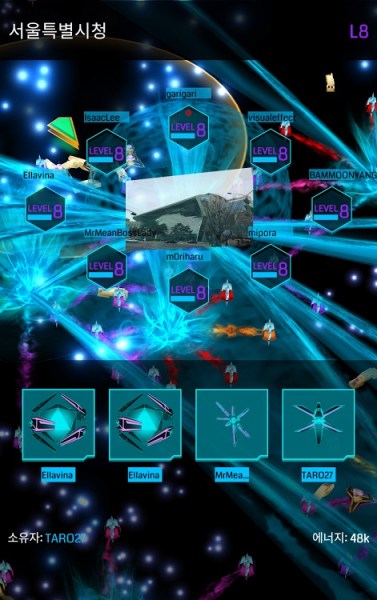 Above: Screen from an Ingress event in China.

GamesBeat: Are there certain things that get much better with something like Ingress once it does arrive? You don’t have to look down at your phone all the time.

Hanke: Yeah, you get your head out of the phone and hopefully take in more of what’s around you. You’ll get some more interesting visuals. That will be novel for people. It’ll be exciting. Ingress will be enhanced greatly when those devices come to market, as will Pokémon Go and other games we make. It’s going to elevate.

The game is what’s important, though. We’ve seen this with platforms throughout the history of video games. It’s about what’s fun in the game and creating new and fun game experiences. The hardware enables that, but it’s not about the hardware. It’s about the experience enabled through it. It’s understanding, for any piece of hardware, what it does that the hardware before it couldn’t, and how you make a game that takes advantage of that.

That’s what we’re focused on. We’re trying to anticipate that and make sure we’re on a solid footing, make sure we’re writing our games for the smartphones that exist today, but absolutely being ready to take advantage of new hardware in the future.

The cool thing about it being an MMO environment — EVE would be another example — is that the game is this game state that exists on the server. Today millions of people are interacting with Ingress. Tens of millions of people will interact with Pokémon Go. You can have differentiated client experiences that interface into that same game world. If 100 people have Magic Leap devices, they can play in the game with 5 million people on smartphones. They’ll have a different experience, one that’s maybe better in ways, but you don’t have to wait until 5 million people have Magic Leap to let them have this fun, social, real world game experience.

It’s not like we’ll have that ramp up at the beginning of a hardware cycle where only so many people have the device and it’s hard to get critical mass. That’s not a big problem here. It can ramp up slowly. If early devices are expensive and not many people buy the first wave, that’s okay for us. We can have a version of our game that works for them and they’ll be playing with everyone else who’s on their phones and more common devices.

GamesBeat: Ingress has all these interesting social goals, like getting people to visit and understand public monuments or get more exercise outside. Does Pokémon Go share some of those?

Hanke: Those are core to everything we do. The places that you’ll interact with in the real world — historical sites, artwork, prominent or special local businesses, those will play a role in Pokémon Go just as they would for us. That same mechanic of encouraging people to take a walk in the park and see some aspect of their city they haven’t seen before, to go explore a nook or cranny in a part of the city they haven’t been to before so they can get a new Pokémon, that will be at work. Measuring how far people have walked and all of that will have specific payoffs for players in Pokémon Go.

Quigley: I would say those are more Niantic values than Ingress values. Those are things John has always championed.

Hanke: It’s what makes what we do worthwhile. It has this awesome effect on people. That benefit creates this appreciation amongst our players that is the reason we have this incredible global community. It’ll help us grow a similar community for Pokémon Go. People feel better. They meet other people and have fun together. It’s great thing to build a business around.

Our Kyoto event in March was our biggest ever single event at the time. It was a stretch for us to have it in Kyoto because we’d previously done everything in Tokyo, where something like 25 percent of the Japanese population lives. But this weekend we’re doing it in Okinawa. It’s December, it’s kind of cold. We weren’t sure how many people would go, but we’ve sold more than 6,000 tickets at this point. It’s going to be one of our biggest events by itself. We’re having a sister event in Milan and one here Oakland, which will be one of our biggest events in America.

Quigley: Okinawa is more than 6,000. Milan is more than 4,500. We’ll go beyond 3,000 in Oakland. And these are just our primary cities in November and December. We also do remote cities, where we find local volunteers that come and help us. Those are some of those other events you saw there.

This quarter alone, as of a week ago, we have more than 40,000 people joining us over a series of 27 cities in October, November, and December. In Q2 we started selling different ticket packages. You get different types of cards and swag and different things, which the community really appreciates. A lot of that is sold out, which is good for us. IAP will be the primary monetization arm for us, but it’s nice that we can get these events to be self-sustaining as well. We have our ARG elements, the overlays with our characters, which will be on site at these events as well.

Even though these numbers are a week old, you can see the cross-section of towns we’ll be in. All of these will be in the thousand range or higher at minimum. We get about a 25 percent lift in RSVPs in the final week. I’ve never worked on a game that’s had the global appeal of Ingress. Our top three markets are the U.S., Japan, and Germany. 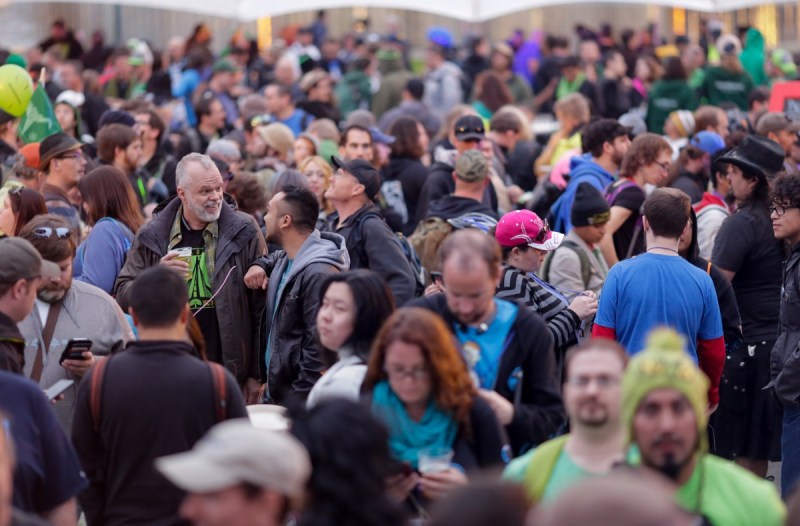 GamesBeat: Are the live events something you’d do right off the bat with Pokémon?

Hanke: We haven’t announced yet, but I’d say that given the success we’ve had with Ingress, it’s a pretty safe bet.

GamesBeat: What about the one side versus the other that’s central to Ingress? How do you create a similar enthusiasm in Pokémon?

Hanke: There will be teams to join in Pokémon, more than two. Those teams will compete against one another.

GamesBeat: The sort of thing that exists within the fiction already.

Hanke: Yeah, with different gyms and teams and trainers.

GamesBeat: What about directed story versus user-created story?

Hanke: Hmm. Nothing to say about that presently.

Hanke: It’s directed in that there is a fiction, a story we tell in every quarter as part of the event series. The players shape the direction that fiction goes. We follow along behind by canonizing parts of that in the books and comics and so on. I would expect there to be a narrative along with Pokémon, but some of that stuff we’re still working out.