Nier: Automata is an action role-playing game starring angsty and sexy robots. Coca-Cola is a delicious, carbonated beverage. You wouldn’t think that the game would be able to take inspiration from the soda, but that’s exactly what happened, according to Nier: Automata director Yoko Taro during a talk today at the Game Developer’s Conference in San Francisco.

Coca-Cola installed machines in Lahore, Pakistan and New Delhi, India, two cities unfriendly with each other. These special Coke machines would connect people via live-streaming video, hoping that they can forgo their hatreds and just enjoy a drink.

“That project left an extremely strong impression on me,” Taro said. So, in his own words, he decided to steal the idea.

Taro is a bit hard on himself. It’s common for game designers to take ideas from other media. Earlier in his talk, Taro noted that he “stole” the basic structure of Nier’s open world from The Legend of Zelda: Ocarina of Time. Again, it’s normal to borrow from classics like that. But it is unusual for a developer to find a good idea from a soda company.

Taro wanted to use a similar concept for Nier: Automata’s ending (so if you want to avoid spoilers, you should probably stop reading now). Near the end, the player’s screen is flooded with encouraging messages. These are created by players across the world. If you beat the game, you get to create your own positive message. 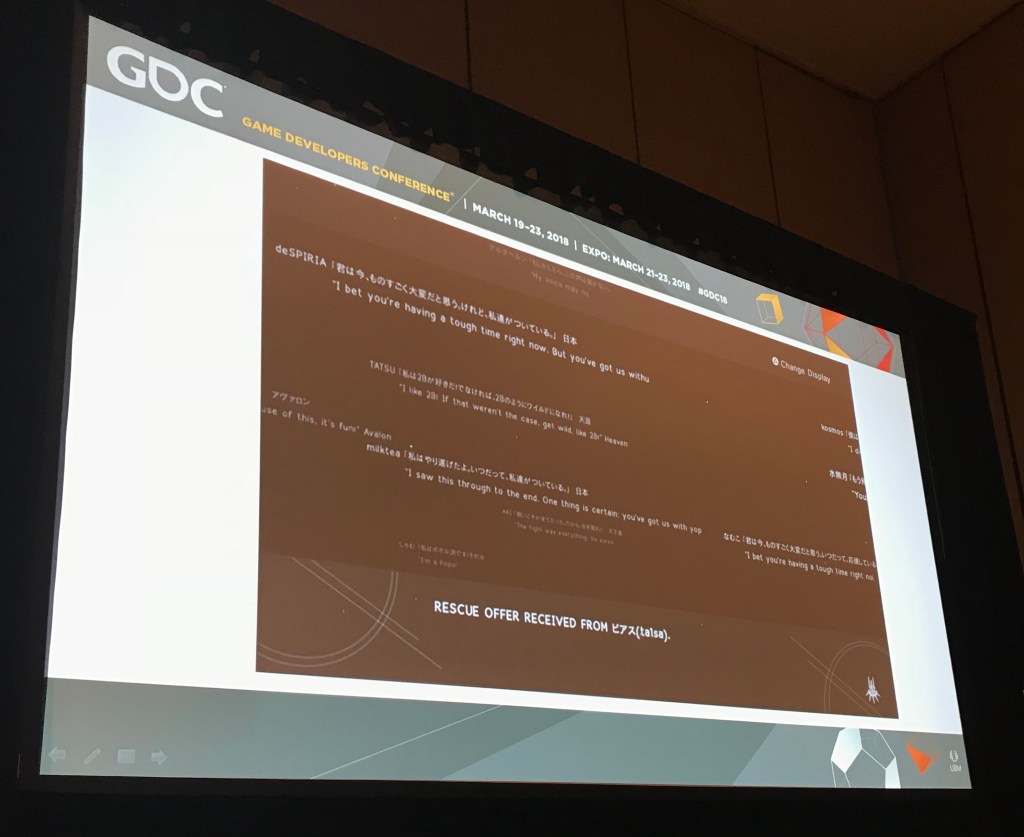 Above: You can do it!

At first, Taro wanted messages to appear only from countries in conflict in each other. Very similar to the Coke campaign, he hoped that this would show players that people they assumed were their enemies were more like them than they thought.

But Taro pulled back from this idea. He was worried about forcing his ideals on other players. Instead, he decided that messages would show up from random players in random countries. It still has a similar effect, showering you with words of encouragement from people across the world and connecting you in that moment as gamers with a similar goal.

So, the next time you enjoy a Coke (or, if you’re me, a delicious Coke Zero) or play Nier: Automata, think friendly thoughts about your fellow gamers from a cross the world.