LOS ANGELES — Square Enix always wanted to do a Nier sequel — it was just waiting for the right partner.

Square Enix surprised fans and Electronic Entertainment Expo attendees this week with the announcement of the return of one of its lesser-known game franchises, Nier. The company tapped Bayonetta developer Platinum Games to head up development, working together to chart a new course for the cult hit, which made its debut in 2010 on PlayStation 3.

Yosuke Saito: Even from when we were planning the original Nier, we always wanted to create a successor eventually. I covered this in the presentation earlier this morning, but we have a very strong core fanbase for Nier. We want to give a great experience to them. But Nier wasn’t a complete success. We needed more time and preparation to get everything in place so we could deliver the experience we’re looking for. The core staff remains the same. It’s the two of us, Keiichi Okabe doing the music, and Akihiko Yoshida doing the character designs. With Platinum Games’ assistance, we felt we could deliver the experience we had always aimed for. For me as a producer, as soon as that collaboration with Platinum was decided, I knew we were gold. It’s up to Mr. Yoko to do his thing now.

GamesBeat: To me, it’s interesting that you might be balancing so many things. You have a new partner in Platinum, the pressure from your fan base, and keeping this open to totally new players. How do you work all that into one game?

Yosuke: From my perspective as a producer, Mr. Yoko is a very unique individual with a unique world view in his games and his designs. I was a little worried about whether we could bring that about properly through this collaboration. We spent six months on pre-production with Platinum, talking with them and preparing. We were lucky, because some of their younger staff are fans of Nier. That helped out a lot. They understood the vision we had. Once we were able to talk about that and come to an understanding with each other, it felt like the right fit.

Taro: That preproduction, those six months, I told Mr. Saito, let’s give it six months, and if it doesn’t jell, scrap it. But I got along great with the people at Platinum Games, so I decided to take the next step into production. As far as your question about new and core gamers, with core gamers it’s very difficult. It’s such a unique vision, a unique world view. It’s a pretty niche sort of core, in a sense. As far as garnering new players, I’m not great at making games that draw new players. If I were, the last game would have done amazingly well. As far as that kind of stuff, I don’t spend much time thinking about it. I just try to make my vision come true.

GamesBeat: If you had stopped after those six months and word had gotten out about it, people would have demanded that you finish it.

Yosuke: I probably would have been fired if word got out, too. 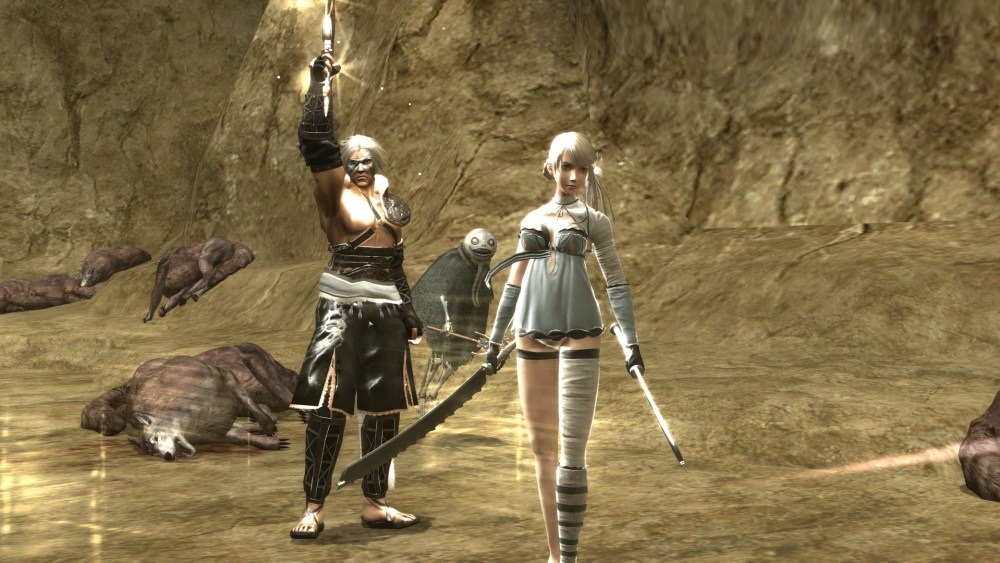 Above: This is the original Nier. It’s as odd as it looks.

Yosuke: For me, I was pretty confident we could expand this game to reach new players. In terms of core gamers and fans of the franchise, that’s a lot of people who love Mr. Yoko’s design and world view, his image of this world. As far as trying to get new people on board with the franchise, I felt that music was very vital to that. We got a lot of positive feedback from the last game. That’s something we couldn’t change. We had to maintain that high quality of music to keep up that feedback. The first impression, utilizing Mr. Yoshida, who designed characters for Final Fantasy XII—getting him involved broadened the design more, not just to the core fans of the series, but to people who may not have tried the Nier games. On top of that, we have Platinum Games, who developed games like Bayonetta and Metal Gear Rising. Their game controls are very fluid. They feel natural. They’re good at making games like that. I felt confident this would work.

Question: I’m not sure how you’re going forward with certain characters. The original Nier was two sort-of separate games. How are you going to resolve that? Are you only going to follow on the PlayStation version of the game? How do you expect Xbox fans to react to that?

Yosuke: In terms of the characters, we decided to go with two different character designs in the original. One was geared more toward western audiences, and Replicant was more geared toward Japanese audiences. That was based on a lot of feedback we received from our North American and European counterparts. For this one, we kept an action-RPG mindset in the development and designs. We wanted to hit a great, high-level JRPG, so let’s just stick to one design. As far as your question about how Xbox players will react, all we can say is, please play on the PlayStation.

Question: Do you feel like the time has passed when you need to design a character for the West as opposed to for Japanese players?

Yosuke: Yeah, I believe so.

Yoko: My personal opinion is that not a lot of Square Enix fans make that distinction anyway.

Question: One thing I loved about Nier was the multiple endings. It encourages you to replay. You had more character development. It opened up the world a lot more. Then you had the ending that completely wiped your save file, which was a very bold statement to make. Will we see those same strong decisions and encouragement for repeat play in the new game?

Taro: It is still the early phases of development. He may change his mind and say he wants to delete your save file after all. You never know. Honestly, with the save file deletion, before Mr. Yoko told me about it, another staff member informed me that he was contemplating putting that feature in the original game. “Do you think this will be OK?” I said … no, it’s probably all right. It’s fine. He actually kept it a secret for a whole year. Then the other staff members were worried, so they told me.

GamesBeat: I wonder if you think this new game is an opportunity to open up the door for new fans to the franchise to check out the first game. Have you built in anything to help out people who aren’t familiar with that game?

Taro: In terms of my design, it’s more for newer players. People who’ve played a previous installment may actually get more confused in terms of the gameplay. It might feel foreign to them, whereas people who haven’t tried the previous game may be able to get involved more and enjoy it more.

Yosuke: There are some connections to the previous game world, but that’s why we didn’t go with the title Nier 2, to make a distinction about that. This isn’t directly connected to the previous game. Getting back to the idea of how the first one didn’t do amazingly well, if it had, we’d go with the title Nier 2 and make something more directly related. But since it wasn’t such a big blockbuster, we wanted to make that distinction. This isn’t as drawn in, but it still has connections. If players try this new title and enjoy it, they can go back and play Nier. If we called something Nier 2, it would seem like you had to go back to the first game and play it to get the full story, the full picture.