Mobile gaming is turning into a graveyard of one-hit wonders, but one studio is has discovered a formula for continual success.

Developer Ketchapp had the top-downloaded iOS game in February, according to industry-tracking firm App Annie. The game is ZigZag, and it is what App Annie refers to as a “super-casual” game in the style of Flappy Bird. The free-to-play ZigZag features challenging one-touch mechanics where you must tap the screen to make your ball change direction along a narrow path. This is just the latest game to find success on mobile by offering up super-simple gameplay.

“In our 2014 Retrospective, we pointed out that Flappy Bird started the trend of simple, one-­tap gameplay or what we call ‘super-casual games,'” reads a report from App Annie. “However, it was Ketchapp Studio that picked up the mantle after Flappy Bird’s brief time in the limelight.”

Other Ketchapp hits on mobile include the number-matching game 2048, the reflex-testing Don’t Step On The White Tile, and Stick Hero.

“Simple gameplay elements like these have become a winning formula for Ketchapp,” the App Annie report continues. “And we are very interested to see what they come up with next.”

Of course, Ketchapp is also known for liberally borrowing from other popular games. 2048 is a very close clone of the original number-matching game Threes. Likewise, Don’t Step On The White Tile is almost exactly the same as Don’t Tap The White Tile.

But while Ketchapp has forced its way to success with games that lift ideas from other popular apps, it has broken out with ZigZag. Notably, this game does not seem like a clone of something else, and it is easily the publisher’s most downloaded game since 2048. 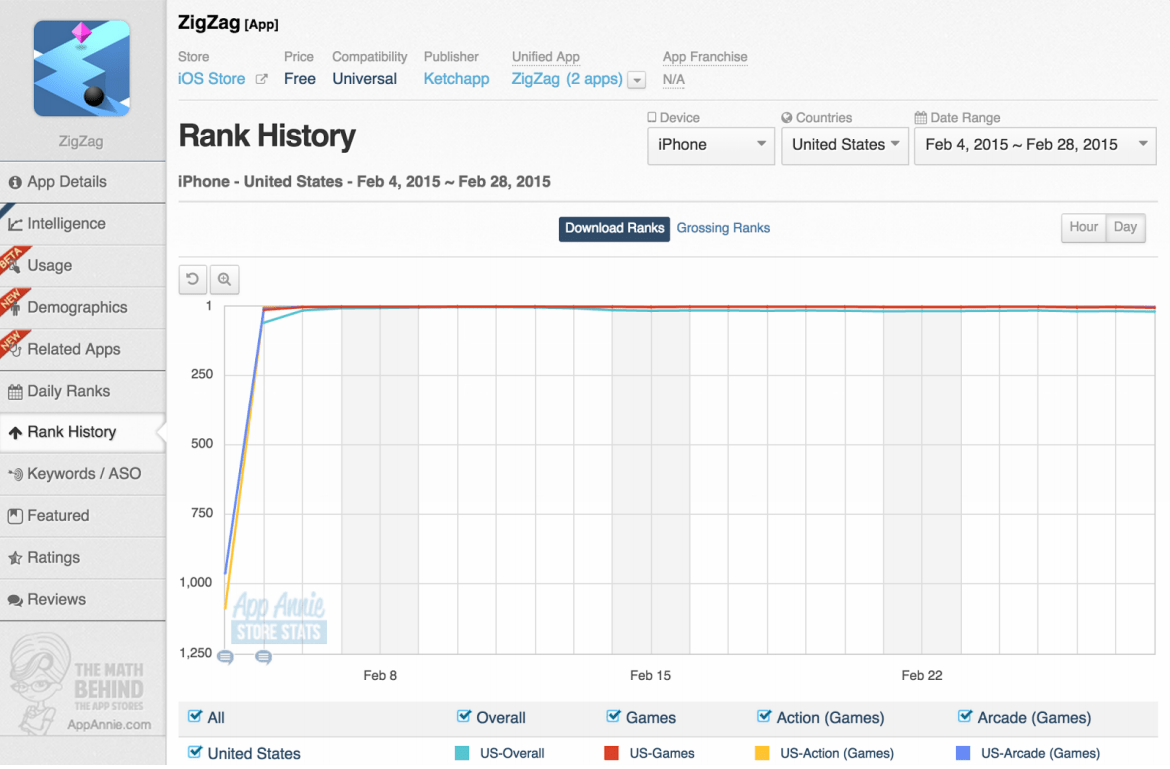 If Ketchapp does continue looking for other popular games to clone, one of its next likely targets is Crossy Road.

Crossy Road is another simple game where players must guide their character across roads and rivers and past other obstacles. It is free-to-play and after dominating iOS, it is doing the same on Android.

“Its success is interesting given its unique monetization strategy,” reads the App Annie report. “[A strategy] that eschews in-­app purchases that assist in­game progression for in­=app purchases that change gameplay through new characters.”

Crossy Road is definitely benefiting from its friendly in-app purchases. The game has made more than $10 million in revenue from 50 million downloads.

And Crossy Road is perhaps the best example of how the ideas of Flappy Bird have expanded. Crossy Road is its own thing, but it appeals to the same ideas that made Flappy Bird such a megahit. At the same time, it has established a simple way to make money beyond just ads.

“That’s quite a lot of success for a game that was intended to be an experiment at doing freemium differently,” reads the App Annie report.