Unlike the Oculus Rift, PlayStation VR doesn’t have built-in headphones, but that doesn’t mean you’ll have to settle for something ill-suited for virtual reality.

Plantronics has partnered with Sony to unleash the Rig 4VR audio headset. These $70 earphones debut alongside PSVR in October, even featuring the official PlayStation branding in every territory outside of the United States. But while U.S. version won’t have the PS logo, it will still come with all of the engineering and tweaks Plantronics put into the Rig to ensure it is comfortable and sensible for someone wearing a head-mounted display. Analysts at research firm SuperData predict VR could turn into a $40 billion business by 2020. Sony could capture a lot of that early spending, and that could lead to some big numbers for Plantronics. 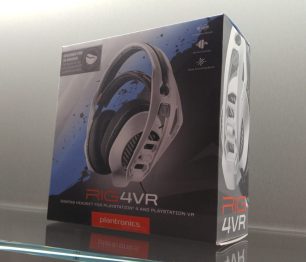 At the Electronic Entertainment Expo trade show in Los Angeles last month, I talked with Plantronics head of global esports Corey Rosemond to get the details on the exact relationship between the Rig 4VR and PSVR.

“We worked with Sony directly to have early access to the PlayStation VR,” said Rosemond. “It seeks a superior audio solution and, more important, an ergonomic solution for gamers that are looking to use both PlayStation 4 and PlayStation VR.”

Sony’s VR visor is a comfortable piece of hardware in our experience, but it is bulky and could pose some problems for certain headsets. Plantronics set out to solve that and ensure the Rig will fit comfortably around any of the PSVR’s outcroppings or protrusions.

“When the visor goes back, with a lot of default headsets the visor is going to bump right into it. You have to compromise,” said Rosemond. “Do you let in more light for a non-ideal VR solution? Or do you have to move your headset back? That’s going to be uncomfortable. We found the right balance to fit that ear cup around the visor.”

Getting the fit right was only the start.

“This headset is light in weight: approximately 200 grams,” said Rosemond. “And it has vented ear cups, which allow for more ambient noise to be let in compared to regular gaming headsets.”

Low weight and ambient audio are crucial to VR. The PSVR is already on your skull and putting some strain on your neck. That is exacerbated as you move and look around, and you don’t want a headset that adds a lot of extra mass. At a certain point, that gets unsafe.

And as for the ambient noise, that might sound like a drawback, but, in VR, it’s a feature. 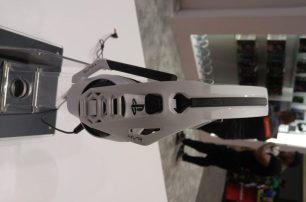 Above: A look at the side of the Rig 4VR.

“What we’ve found, this may actually help VR users for maintaining balance,” said Rosemond. “People don’t realize that subconsciously, what you hear and how noise sounds, that affects your balance. Being able to allow some of that in allows us to have some better balance from a VR perspective. It lessens the motion sickness just a bit.”

Plantronics also put its expertise with microphone technology (it is a military contractor for audio equipment, after all) into the Rig to give players a high-quality communications experience. Rosemond highlights this as one of the first things gamers will notice if they choose to upgrade to the Rig 4VR from a pair of cheap headphones.

Finally, everything in the Rig 4VR is modular. That means you can take it apart and replace components however you want. You can put in new earcups that don’t have the audio passthrough, for example. The microphone pops off if you’re not using it, and you can also add a lengthier cord. Since the audio port for the PSVR is on the headset itself, the built-in cable is only a few inches long. That’s a huge feature because I can tell you from experience that longer headphone cables get tangled in the HTC Vive head-mounted display all the time. But when you do go play a TV game, Plantronics is including that extender so you can plug it into your controller and keep on using the same headset.