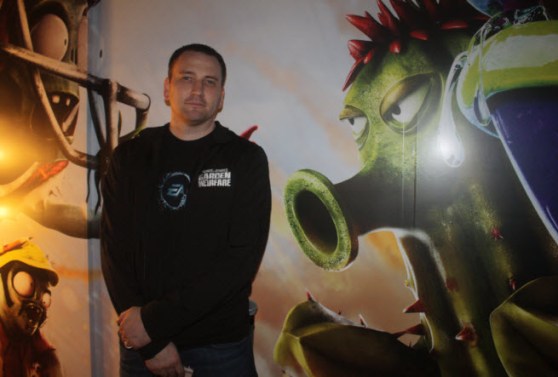 LOS ANGELES — PopCap Games is known for pioneering casual titles like Bejeweled and Peggle. But at this year’s Electronic Entertainment Expo, Electronic Arts showed off PopCap’s Plants vs Zombies: Garden Warfare, a shooter game based on the same engine that developers are using to create Battlefield 4. In the multiplayer game, you can play as a plant or a zombie and wreak havoc in a garden with weapons such as pea shooters and exploding pumpkins. This comical title is one that may explain why EA paid $750 million-plus for PopCap a couple of years ago.

We talked with PopCap producer Brian Lindley about making Garden Warfare. Here’s an edited transcript of our interview.

GamesBeat: Are you guys making the game in Seattle?

Brian Lindley: Actually, most of my team is located in Vancouver. We’re on the same campus as EA Canada, where a lot of the sports games like FIFA are built. 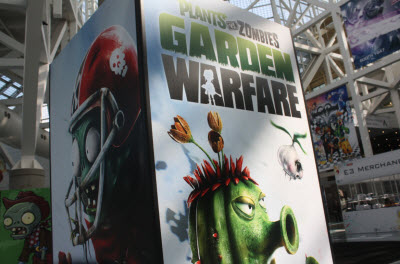 GamesBeat: The first game came out about four years ago. How did you get this going, and how long ago did it start?

Lindley: We’ve been in development for more than a year now, close to a year and a half. Around early 2012 we started with concepts of what the game could be, and we’ve iterated on that ever since to build what we have today.

GamesBeat: I’ve been told that they spent a ton of time getting Plants vs. Zombies on all different platforms, and that’s why it took four years to get the next one going.

Lindley: Yeah, there’s a whole story behind how long Plants vs. Zombies 2 took to make. The name is both a joke on how long it took as well as the game mechanic itself, which is pretty clever. Good games take time to make.

GamesBeat: Is this game as complicated to make as a Battlefield game?

Lindley: In some respects, yes, but we’re trying to differentiate ourselves. We’re not trying to build something with the scope of what a Battlefield can do. They have a lot of modes. They have their single-player campaign. That adds up to a lot of work over time. Because we’re so focused on multiplayer and cooperative, just nailing a great online experience, that means we can pick our battles a little bit more than Battlefield can.

GamesBeat: Are there some things in Plants vs. Zombies 2 that you’ve also brought over into this?

GamesBeat: Are some of the characteristics of the two sides similar to the roles in the first game? Like the plants might be less mobile, while the zombies can move but are slow?

Lindley: It’s a little bit different from that. The way we look at it is that the plants are very much defensive, because that’s what they do by nature in the game. The zombies are more an offensive team. I think you see that come through in their abilities. The plants are geared toward defending things, as opposed to taking the fight to the zombies. We maintain that in our game as much as we can.

GamesBeat: Do you have Battlefield people assisting, because it’s the Frostbite engine?

Lindley: We definitely get help from the Frostbite team, which is part of DICE. They’re not actually working on the game – our team’s working on it – but we work closely with them as far as what’s going in the engine, when they’re updating it, when they’re improving it. We try to take all that stuff in, so we can take advantage of the work and energy they’re putting into Frostbite.

GamesBeat: This shows that the engine works, that it’s versatile, that you can do anything with it.

GamesBeat: It seems like that would help reduce the workload for you guys.

Lindley: A little bit. We spend less time building up core technology and more time just making the game, which is ideally what you want as a game creator. I’ve worked on a lot of projects where we just spent years getting technology to work. We have very little time at the end to iterate and make the game as good as it can be. We’re actually iterating all the time on this game, because we don’t have to worry about building a shooter engine. It’s already there.

GamesBeat: Getting it to work, did you evolve from something that was very different in the beginning to what you have now?

Lindley: Quite a bit. One of the things that we started with is that we sort of threw everything and the kitchen sink at the design. How do we make this work? How do we take all the elements people love about Plants vs. Zombies and weave it into an action experience? Over time we figured out what works best and what doesn’t. We’ve simplified what we’ve done a lot. We had a lot of complicated and detailed stuff early on in development, and we’ve pared that down to what works best. We’re down to something that’s really tight at this point.