Grand Theft Auto V could sell 20 million or 30 million copies in the coming months without a peep from Rockstar Games. But Dan Houser, vice president of creative and cofounder of Rockstar, gave some rare interviews this week to [a]list daily, Polygon, and the Guardian. Curiously, none of the interviews focused much on what the mass media always talks about: the extreme violence of the series.

What emerges is a picture of how Rockstar views the open-world game franchise its design goals for a game that took five years and an estimated $260 million to make. Rockstar’s billion-dollar franchise, which has sold more than 135 million units, is the envy of the industry and yet Hauser seems focused only on creating high-quality games that he wants to play.

“What we really always wanted to stand for is high quality games that are appealing and are not based on focused testing,” Houser said. “Focus testing in 1999/2000 would never have predicted that a 3D gangster game was going to blow up. Then having done that, no amount of focus testing would say do it in the ‘80s. So doing stuff that is true to yourself, as opposed to what the market thinks it wants, that’s definitely something that we’ve always done and hopefully other people have followed suit.”

Houser says that games are like movies with a “general movement toward quality.”

“I think movies are brilliant at finding their own place in the world, but games are doing the same thing,” he said. “It’s been insane how quickly games are evolving. Games will hopefully continue to evolve from here and continue to find their place in the world. But movies differentiate themselves from recorded music and books, and games should do the same from movies.”

Houser credited his brother Sam and developer Craig Conner for the obsessive focus on music in the game. The soundtrack of the car radio and its various stations are a constant in the game.

“The impact has been to show people that music can be more than just pop hits,” he said. “They’re both obsessed with it. It’s an enormous labor of love for us to do it. Music helps create this world that people are immersed in. With all of this stuff, hopefully, we’re showing that games are powerful and potentially important and interesting.”

As for the evolution of GTA and the game industry, Houser said, “You’re always trying to find a way of reaching different audiences. And even with the action games, we’re trying to constantly make them easier to play and put different difficulty levels in them so the barely-skilled 18 year old with very short nerve endings can play at the hardest level possible. And those of us who are more afraid or whatever to begin with can play on the easiest level. The games are hopefully getting good enough as pure adventures, and they’re interesting enough to play, that it’s not just about shooting anymore.”

Houser told Polygon about how Rockstar is trying to get better.

“We’re trying to push video games forward to the best of our limited ability,” he said. “We’re not trying to do anything more or less than that. The merits or demerits of games should be about creative strengths and weaknesses and areas where they need to evolve, or areas where they’re already doing amazing stuff, or things that they supposedly can’t do, not about how much money they can make. That sort of Hollywood way of looking at things is never really been something that we at Rockstar have engaged in.”

Houser said the team is working on additions to GTA Online. As for future GTAs, they could go anywhere, but they will likely be focused on an open world and crime.

“Not till the very dying embers of [Grand Theft Auto V] will we give the next one a moment’s thought,” Houser told the Guardian. “And that’s if we’re going to do another one – we always said that if we couldn’t think of something interesting to do then we’d stop – for this or Red Dead [Redemption, Rockstar’s Wild West open-world game], but particularly for GTA. As much as anything they are a response to what we think went well or what we could do better or what could be different from the last one.”

As for the design of GTA V, Houser said to the Guardian, “This time, we wanted to make something very broad in scope because we have a bit more understanding of the tech and we wanted to use that to put a big landscape in there and lots of outdoor aspects to it. That was the first sliver of a concept.” 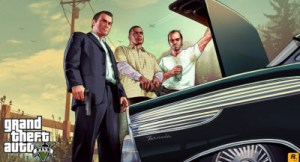 After that, Houser said the focus turns to the characters and the reason why they’re in the world. In this game, Rockstar focuses for the first time on a trio of criminals rather than on just one narrative.

“Look at the evolution of our games from GTA 2 to GTA 3, through Red Dead,” Houser said. “I’m not saying we do a good, bad or indifferent job; I’m just saying there’s a clear evolution in technique, if not in talent – the technique at least has clearly moved on. In terms of what we’re doing, our understanding, and the technology needed to support that understanding, the way that story and missions and off-mission stuff in the open world games all interplay – it’s getting more sophisticated, that’s definitely the case.”

Regarding competition in the game industry, Houser said, “For us, the more games there are the better, the more they all sell, the better. The industry has got a very strange desire to grade everything and say it’s all on the verge of failure. For an industry that seems to be doing pretty well – even its downturns are pretty minuscule – it seems to be desperate for its own suicide. It’s great that there are games doing well, and are getting people’s attention and there is room for everybody making good games. Call of Duty was great but Red Dead Redemption came out and did fantastically for us.”