Destiny’s Sword has all the trappings of a huge sci-fi adventure: an intergalactic war, big mech suits, and team-based combat. But indie studio 2Dogs Games hopes that the game’s focus on mental health issues is what’s going to make it a memorable experience.

Coming to PC in 2020, Destiny’s Sword is a free-to-play massively multiplayer online game (MMO) centered on an ongoing conflict over a precious mineral resource. You play as a commander in charge of your a squad of soldiers, managing their careers as they cycle in and out of duty. Like other MMOs, your characters will gain experience and new abilities through combat. But in addition to monitoring their statistical progress, you’ll have to pay attention to their emotional needs, too.

Some soldiers may become too scared during a fight, leaving them stunned and unable to act for a while. Multiple teammates may argue with each other, which will negatively affect their combat performance. When you’re back in your HQ, you have to figure out the causes of these problems by talking to your soldiers.

“It really felt like it was the right time to try and do something innovative in the industry and change the way players interact in online games — [to create] a healthier, more positive game experience,” 2Dogs founder and CEO Ken Hall said in an interview with GamesBeat. “And that’s why I founded the company and put a team together of people who really want to change the way we play these online games.”

The focus on mental health is more than just a clever gameplay feature. It’s the reason that Hall — who worked on games like Crackdown and ABP: All Points Bulletin — decided to return to the industry after a long hiatus. He left in the late 2000s because he was concerned about the rise of addictive mechanics in free-to-play games and didn’t want to contribute to products that might ruin people’s lives.

With Destiny’s Sword, Hall wants to prove that it’s possible to create a fun online experience that doesn’t rely on cheap gameplay hooks and that would, at the same time, help destigmatize mental health issues. Though the team is small and still in the early stages of development, it recently received a $1 million grant from the Canada Media Fund and is seeking additional funding through a Kickstarter campaign. 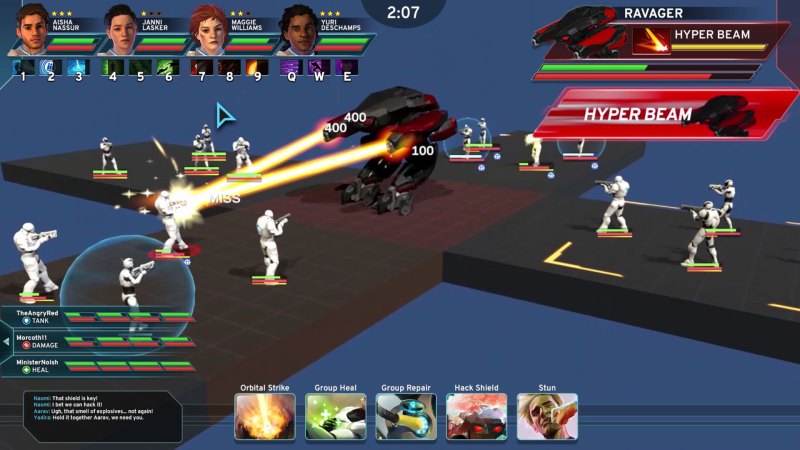 Above: An early prototype version of Destiny’s Sword’s fighting mechanics.

Games like XCOM and Darkest Dungeon have toyed with the effects of friendships and stress levels in your parties, but Destiny’s Sword takes it a step further with the studio’s proprietary Insight Engine. The Insight Engine is an AI that simulates the backstories and personalities of each character, ultimately determining their psychological development throughout the game.

“Each character has a unique personality that affects the way they react to different stimuli. So you really have to get to know your characters in order to understand what makes each one tick. … What situations you put them in, how you interact with them — that will all affect their emotional state,” said Hall.

Some soldiers will be easier to talk to, while others require more work before they start to trust their commander. Their mental health also affects their relationship to each other, especially if they’re friends. Those who have a good bond will earn bonuses in combat. In Destiny’s Sword’s PAX East demo from earlier this year, a character suffering from PTSD performed better when he fought alongside a longtime friend because that person could talk him through difficult situations.

The best way to learn about these relationships is outside of combat, when you can spend time with your squad. Each individual’s mental well-being is displayed through an emotional state matrix, a colorful chart that shows their current feelings (such as whether they’re angry, happy, fearful, etc.).

While you can influence the way they’re feeling through talking and giving them advice, external events that are out of your control can change their emotional states as well.

“[The characters] will also have their own complete life simulations as they go on. They could go out to the bar together after a mission and form positive relationships. Or they may get into an argument if they’re fighting over a sports team or something,” said Hall.

Above: Soldiers rest in their living quarters.

Along with their histories and personalities, the dialogue for each character is procedurally generated. Hall said the Insight Engine will provide a fresh experience with each interaction. The studio also brought on prolific sci-fi author M.D. Cooper (known for his Aeon 14 series of books) to write major story arcs and dialogue for the game.

“When we designed the dialogue system, we thought of it like a dungeon crawler. So it’s a big puzzle game where you’re going down dead ends and investigating all these different twists and turns and you have to fight bosses — the bosses are basically overcoming the characters’ inhibitions to access information, that kind of stuff,” Hall said.

Another important goal for the studio is to portray mental health issues in a positive and authentic way. 2Dogs worked with Canada-based veterans support group Spartan Wellness to consult with real-life soldiers about the lasting emotional scars of war. It also partnered with mental health organization Take This.

“[Take This’s] clinical psychology department is helping us make sure that we contribute positively to the discussions around mental health and that we’re teaching people valid strategies for how to help not just their characters manage these conditions, but also how to help other people — their friends and family if they know somebody that’s suffering, how to communicate with them, and also how to encourage them to seek treatment and support them through that process,” said Hall.

By tying the characters’ emotional states to combat performance and other in-game milestones, the developers want players to care about their team and to make empathic decisions when helping them. And so far, it seems like they’re on the right path.

Above: Concept art of one of the game’s mech enemies.

In a separate demo at PAX East, convention attendees were able to dive into the social aspects of the game and talk to four different squad members. The developers expected people to spend two or three minutes in this streamlined version of the dialogue system. But some ended up playing close to a half-hour because they became so invested in the characters.

“People were saying, ‘I suffer from anxiety,’ or ‘My partner suffers from anxiety, and talking to this character was like talking to them and I really started to care about them.’ … And so it became very personal for them dealing with these characters because they were [in] such everyday situations,” said Hall.

Correction, 7:26 a.m. Pacific: The Alan Alda Center for Communicating Science said it did not partner on this game We have fixed this error.