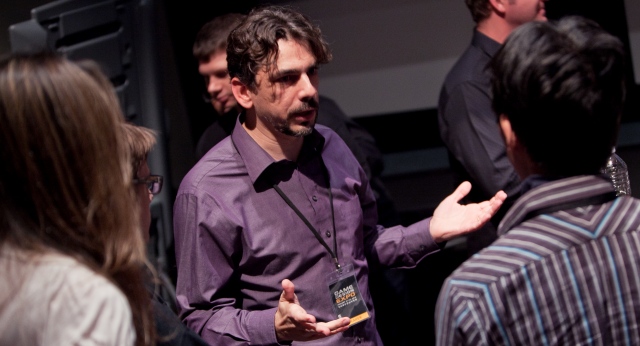 Speaking at the Vancouver Game Design Expo, the Associate Lead Designer of Star Wars: The Old Republic summarized his experiences from six years of development on Electronic Arts’ high-profile MMO. The Star Wars game could go down as one of the most expensive ever made.

Lusinchi started his insightful and entertaining lecture off with the advice “You are not working enough on your development tools”. He emphasized the return on investment for tool optimization because of the development time-savings, especially in the MMO genre, where content creation continues long after the game launch.

Lessons 2 and 3 covered communication with the fanbase (“Everything you say can – and will be – used against you”). Lusinchi pointed out that the reactions of MMO fans are particularly strong and developers should be prepared for dealing with irrationality. According to his “peer validation theory” player achievements in an MMO feel more real because other humans witness them. As a result players can become extremely invested and view any threat to their game as an existential threat to their real selves, causing them to react with passion and aggression.

Consequently Lusinchi recommended to “wait until it’s done, tested and proven” before announcing any changes to the game and only talk about them when one is “absolutely certain how the feature is going to work”. If there is any room for ambiguity, players might end up feeling disappointed when it doesn’t meet what they had imagined.

His fourth lesson dealt with the “light side” of social gameplay, gently nudging strangers towards social interactions. Lusinchi observed that many people play MMOs because there are lots of player, but don’t actually talk to them that often. He drew comparisons to real world behavior: “We crave social interactions and go to places where they might happen, but we were also told ‘Don’t talk to strangers'”.

He recommended that “If you’re single, you should get a dog.” as one of the best ways to meet other people in real life. With the dog acting as the icebreaker, it becomes more socially acceptable to strike up a conversation. The Star Wars: The Old Republic equivalent is the different “buff” spells that all character classes can cast on themselves, but also on other players. They often result in a return buff or a “thank you”, breaking the ice and potentially leading to conversations and playing together. Other mechanics to encourage social gameplay are social points and 1-click options to easily add other players to a friends list. 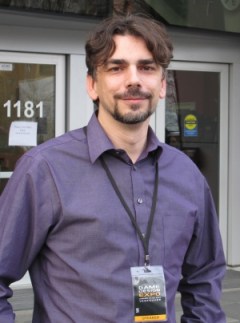 However, Lusinchi didn’t feel ready to discuss the “dark side” of social MMO gameplay yet: “grieving is an interesting emerging behavior”. He added that he would need the experience of a full year of Star Wars: The Old Republic live service “to find out [this lesson] the hard way”.

In lessons 5 and 6 he talked about making use of “powerful motivators” for the development personnel: self-directed “shame is good, anger is better”. By playing their own game, experiencing user reactions and reading comments on the general forum, developers become highly motivated to improve their product. Inviting friends and family to play the game can also have motivational side effects: “Once your spouse gets stuck at a quest, you get to hear about it”.

Lusinchi also recognized that a lot of the “cool stuff”, little extra features and ideas that make good games great, are hard to come by. As regular working hours are occupied by the essential work (and plenty of meetings, of course), it’s often nights and weekends where a lot of the cool stuff is created. But there is a “fine line between a company hero and a loose cannon” who might neglect important tasks or burden the project with messy code. Lusinchi’s recipe for success includes “a healthy project, a motivated person, knowledge, good tools, attention to details and understanding the limits”.

Emmanuel Lusinchi saved the “single most important success factor for your project” for his final lesson: “hire well”. He recommends a demanding interviewing process: “If the interview process does not feel cruel and unusual, you are probably doing it wrong.”

He recalled his own job interview at Bioware’s Edmonton studio back in 2003. Lusinchi had applied with a self-created module for the Neverwinter Nights role-playing game. The company liked it, but wanted to see how he could handle the deadline pressure of real game development. So he was spontaneously put in front of a computer on a Friday night and given 24 hours to create another module (Lusinchi was graciously allowed to call his wife to inform her about the altered weekend schedule).

The Vancouver Game Design Expo is an annual event organized by the Vancouver Film School (VSF) to raise the profile of its game design program. Bioware’s Emmanuel Lusinchi was one of the lecturers during the VentureBeat-attended Industry Speaker’s Day that took place at the VanCity Theatre on January 21, 2012.