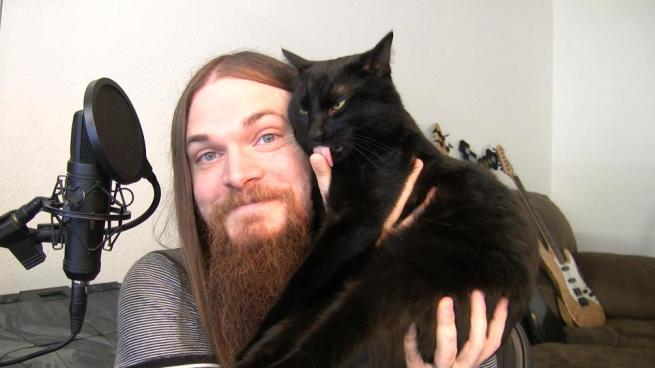 The video game industry is gigantic. It supports billion-dollar empires like Nintendo and Activision. But it also supports tons of cottage industries as well.

Take Smooth McGroove, a singer. McGroove is famous for his YouTube page, where he covers classic video game tunes in an a cappella style. What’s most impressive is that he does all of the parts himself, and it’s his full-time job.

Here, have a look at him rocking Guile’s theme from Street Fighter II:

The long-time gamer’s real name is Max Gleason. He lives in Oklahoma City, where he used to support himself by teaching music. That’s something he doesn’t have time for anymore.

Gleason says he is a very project-oriented person, and he loves pursuing a project.

“Since my videos have gone from reaching only a few dozen people to reaching an audience of tens of thousands, I wanted to start taking the process more seriously by spending more time on the creation of the videos,” said Gleason. “I still have tons of fun recording the arrangements, but I have become more of a perfectionist when it comes to the final product.”

Those efforts are paying off. Gleason’s Smooth McGroove YouTube page has more than 181,000 subscribers. His videos have earned nearly 9 million views.

It didn’t start out that way. The singer is a bit embarrassed of his early attempts at this concept.

“The videos had a slow reaction at first,” he said. “That’s partly because I didn’t know what I was doing, and partly because of the lack of time I spent on each video.”

After some practice, Gleason said his videos “got a bit more bearable to watch.” Then Nintendo took notice. The official Legend of Zelda Facebook page posted Gleason’s cover of Ocarina of Time’s “Song of Storms.” On that day, subscribers to the Smooth McGroove page jumped from 90 to over 1,200.

The musician is now releasing videos about once a week. He released this excellent arrangement of the music from Dr. Wily’s stage in Mega Man 2 about three weeks ago:

You are probably wondering how he does this. His explanation makes it sound a lot easier than it probably is.

“First, I load the song into [the Cubase audio program] to find the tempo,” said Gleason. “I then begin picking the song apart by ear into individual tracks. Once I get the scratch tracks — [a rough version of each part] — recorded and separated, I start to do serious takes until the song sounds like I want it to. After I finish recording I mix, equalize, and add space to the tracks if they need it.”

He makes it sound like following the instructions on the back of a box of Jell-O pudding.

Even for Gleason, this isn’t always very easy. He pointed out “Flandre’s Theme” from the PC shooter Touhou Koumakyou – the Embodiment of Scarlet Devil, which gave him a little bit of trouble.

“It had so may intricate parts that I had to work every single day [for an entire week] for many hours just to get enough done so that I could make my own deadline,” said Gleason, who gives himself seven days to make each video.

That said, the YouTube celebrity isn’t afraid to tackle any song.

“I don’t think there is a song that would be too challenging,” he said. “Although, I do have to modify some parts to fit inside my range.”

Going forward, Gleason doesn’t intend to stop. He has a big list of songs he still wants to record.

“Games have played a huge part in my life since before I can remember,” he said. “It all started with Atari, then Sega Master System, then SNES, and on from there. I still get excited about new games coming out, but I also go back and play old ones from time to time. I’m really looking forward to recording more classic songs from my childhood, games like Mario, Metroid, Zelda, Mega Man — the list goes on and on.”