Dirty Bomb is a fast-action shooter that will remind you of the run-and-gun games from the early days of shooters. It’s a game for hardcore shooter fans, made for the age of free-to-play and e-sports.

Splash Damage, the developer of the online free-to-play shooter that is being published by Asian gaming giant Nexon, built the game in the spirit of one of its predecessor games, Enemy Territory: Quake Wars, an online shooter that debuted in 2007. We got a good look at the near-final game at a Nexon event in San Francisco this week. It has a lot of modes, like 5-on-5 combat that will appeal to the e-sports fan. And it isn’t a high-pressure free-to-play game, where you have to spend money to gain victory. Rather, it has seven characters to choose from, and it rotates the characters so three are available at any given time. If you want to have one character permanently, you have to pay. That’s a player-friendly monetization model that Western gamers will like.

It’s also a lot of fun. I tried unsuccessfully to stay alive and contribute to my squad of five during a couple of hours of multiplayer combat, but it wasn’t easy. Neil Alphonso, lead game designer, explained the design philosophy behind the game. Splash Damage wanted to reward skillful players and communication. The game play can be complicated, and you have to think and shoot fast.

“First and foremost, we want to give our fans what they want. It’s a lot easier — especially for us, given that it’s in our DNA — to make something hardcore and then work on ways to make it more accessible, than to go the other way around,” Alphonso said. “It’s harder to start with something simple and then start adding loads of depth to it.” 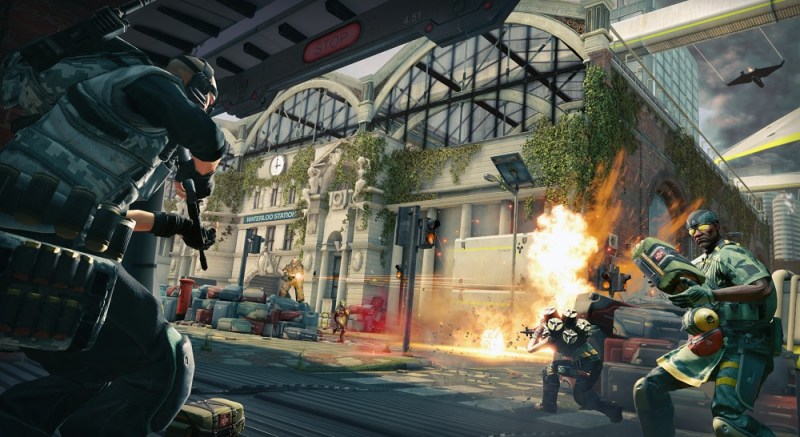 GamesBeat: How long have you guys been working on Dirty Bomb?

Neil Alphonso: Dirty Bomb actually started as a bit of a prototype project. If I’m going to talk about our first builds and the start of work on it, it’s been about three and a half years. Quite a while.

GamesBeat: Did it have some kind of heritage with Quake Wars or anything else?

Alphonso: Very much so. We wanted to go back to our old-school sort of game, something our fans really wanted. We wanted to do it as a team as well. We try to do all sorts of different projects. This was a chance to make the sort of game our studio was founded on, a hardcore PC shooter.

GamesBeat: Was free-to-play the new element here? What were some of the new ideas to bring it into the modern age?

Alphonso: Free-to-play is mostly about being able to support the game as a live product. With boxed games, you have to get people in up front and then you have to support it. It’s weird. You don’t have the same relationship. We looked at the success League of Legends was having or Counter-Strike: Global Operations. We really liked that. They were able to react to what the community wanted. In a boxed product world you can’t do that.

Going back to the PC and having people come in and pay what they want — The thing is, Wolfenstein: Enemy Territory was free. That’s one of the reasons it was so popular. Anyone could get in. They could get their friends to play. We thought it would fit this game really well.

GamesBeat: One of the established ways to monetize free-to-play games seems to be rotating characters in and out. You have a few available at any given time, but if you want the full slate you’ll end up paying.

Alphonso: Well, you don’t have to pay money. Anything in the game you can earn the credits for by playing. If you enjoy the game and you have a lot of time on your hands to play it, you don’t have to pay a dime. That’s one of the ways we’re doing it. It’s the first way. It’ll be familiar to people who’ve played League of Legends or anything like that. We’re going to have weekly rotations where you can try different mercs. We don’t want anyone to have buyer’s remorse.

There are going to be other things as well. If you want to get crates, get the different loadouts and outfits, people can do that as well. Nothing that affects gameplay, though.

GamesBeat: We’ve seen a few generations of free-to-play shooters that have done this. It generally works. Since you can adopt that established business model, is there something else you can concentrate on when it comes to delivering something new and innovative?

Alphonso: Really it’s the sum of the parts. We’ve taken a lot of different things from a lot of different genres. The character rotation is very much MOBA style. A lot of the team members are huge fans of those kinds of games. But merging that with a super old-school shooter feel and our team-based strategy — looking at the individual parts I don’t think it’s anything crazy, but when you put all those things together it’s something quite different.

GamesBeat: It sounds like you encourage a lot of talking in the game, a lot of communication. 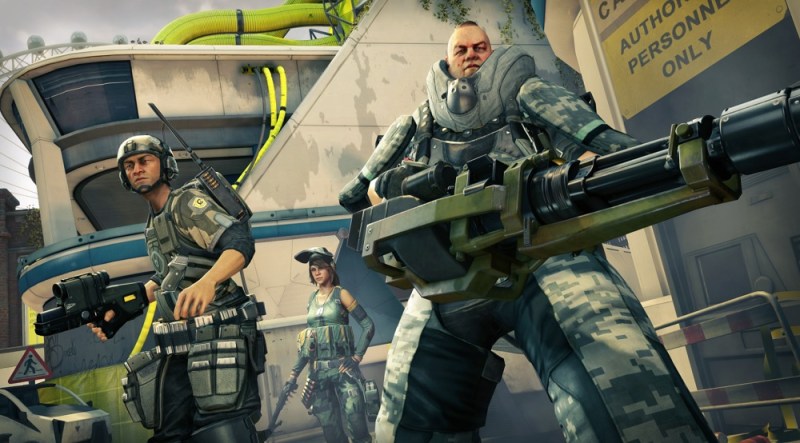 GamesBeat: A lot of shooter games tend to be silent.

Alphonso: It’s very teamwork-based. You have to have people playing their roles. It goes back into the history of the studio. They played these games together. That’s how the friendship started and it went on until they formed the studio and started making these games. We’ve always been big believers in both the competitive aspect and, more important, the team aspect. We’ve had that in every one of our games.

GamesBeat: It takes a lot of skill. I came in last every time. I was trying to do everything on the keyboard sometimes – pushing to talk, sprinting around, shooting.

Alphonso: It’s a PC game. It’s fast and twitchy. People who are used to those sorts of games will pick it up and do better more quickly. But this is a bit of a different experience. You have a very isolated player base with set teams. Ultimately, in the wild, we’ll have skill-based matchmaking. There will be many more players and people will be matched more or less with other players who are comparable in skill. That’ll be a better experience. Some people, I watch their Twitch streams down there, and well, I wouldn’t want to play against them.

GamesBeat: It’s an old-school hardcore shooter. Can you still find a way to make it accessible to people, to encourage new players?

Alphonso: We have a lot of ideas about that. One thing that Jeremy mentioned in his talk was the new modes we’re prototyping. That’s one way. First and foremost, we want to give our fans what they want. It’s a lot easier — especially for us, given that it’s in our DNA — to make something hardcore and then work on ways to make it more accessible, than to go the other way around. It’s harder to start with something simple and then start adding loads of depth to it.

In some ways, over the years of working on this game, we have made choices to keep it even, but there are pros and cons every time. You just try to keep it consistent and fitting to the vision. This game has also been played by people other than us more than any other game I’ve worked on. They’ve been giving us feedback the whole way through.

GamesBeat: Do you find that some less experienced players might gravitate toward a certain character or weapon? In Call of Duty it used to be that the grenade launcher was the “noob tube.”