Sony’s PlayStation 4 may have a lead in the latest round of the console wars, but Microsoft has a plan to do something about that. It involves gamers. It involves sports fans. But most of all, it involves gamers who are sports fans. The company sees this demographic as the key to establishing its new console as a must-have device, and it’s partnering with some of the biggest names in sports and gaming to make that happen. With the multibillion-dollar console-gaming market on the line, sports fans might seem like an insignificant slice of the whole. But the past has shown that isn’t necessarily the case.

With bundles and services, Microsoft goes into the gift-giving season with plenty of bullet points to catch the eye of the sports-loving crowd. Whether those features will actually persuade those people to go with the Xbox One is another matter.

“I view [the Xbox One Madden NFL 15 bundle] as part of Microsoft’s strategy to drive new hardware sales,” Eilers Research analyst Adam Krejcik told GamesBeat. “And I believe this promotion could be successful for alluring cost conscious sports enthusiasts who haven’t yet decided between Xbox One and PlayStation 4.”

Well, let’s examine that and see what exactly Microsoft is offering people who are into ball games. We reached out to both EA and Microsoft for this story, but both declined comment.

An Xbox One signing bonus

When it comes to sports and the Xbox One, Microsoft is pushing three big things: a Madden NFL 15 Xbox One bundle that is out this week (and a FIFA 15 one heading to Europe this year); an NFL app that enables fans to easily keep track of their favorite team and fantasy players; and the new EA Access subscription service that has enabled members to play the new Madden five days early.

Bundles that come with sports games aren’t anything new, but the Madden and FIFA bundles should still both help the Xbox One. That’s because the package will come with the system and a game for $400, which is the same price as a game-less version of the PlayStation 4. Football fans (both of the American and European persuasion) looking to upgrade over the next few weeks may see a Microsoft console that comes with the game they want and pick that over a PS4 where Madden and FIFA costs another $60.

While Microsoft has a cozy relationship with EA Sports, Sony paid for the Major League Baseball license to produce its own critically acclaimed sports game MLB: The Show. That game is a big deal with baseball fans, but Sony has never bundled The Show with its home console. So Microsoft is getting aggressive in its attempts to lure this crowd to its system with what is essentially a price cut on a console and a game.

The apps and fantasy football

It’s not all about sports games for Microsoft. The company has also established a relationship with the National Football League. That deal resulted in an app that enables fans to pick their favorite team, get highlights from around the league, and more. NFL Network, the league’s official cable channel, provides the video content that fans can stream on the Xbox One. But unlike that channel, you don’t have to wait to see the highlights you want. The ESPN app also has similar functionality for other sports. 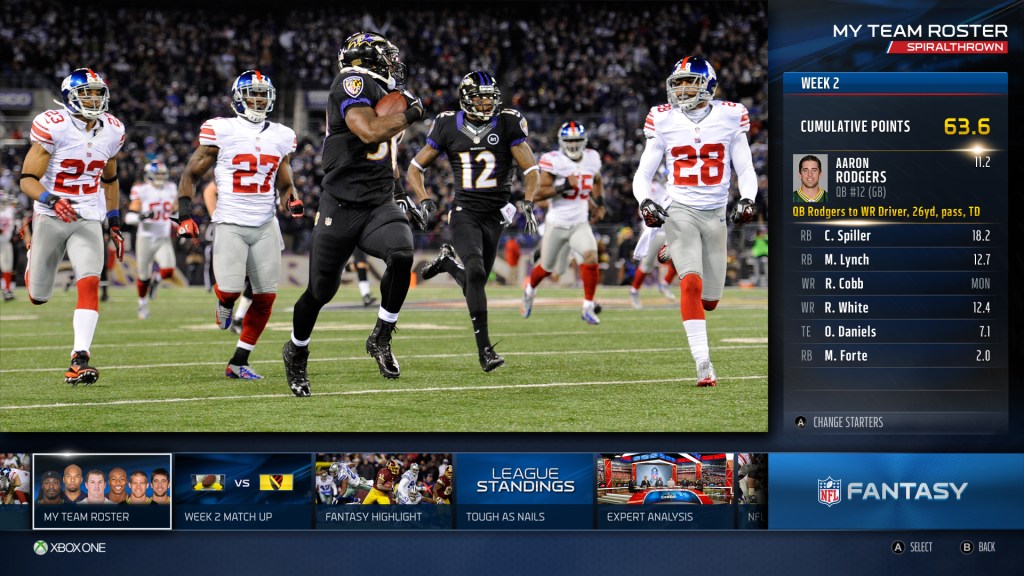 Above: Fantasy football using the NFL app on Xbox One.

Perhaps more important than the highlights is the fantasy football. Anyone who has a league on NFL.com can automatically hook into their account in the Xbox One NFL app. This enables you to see a sidebar that updates with your team’s performance in real-time on your television. This means you don’t have to keep checking your phone or keep your laptop open throughout Sunday. It’s limited in functionality because you can’t use this with your team on Yahoo Sports’ or CBS’s fantasy leagues (though this could change), but it’s a neat feature for those who can use it.

Microsoft’s aforementioned cozy relationship with Electronic Arts manifested in an interesting way earlier this month. The two companies announced the EA Access subscription service, which is exclusive to the Xbox One. This program’s big feature is something called The Vault, where members get an instant collection of slightly older digital games. This includes last year’s sports games like Madden NFL 14 and FIFA 14. With this, people could spend $5 to get extended hands on time with FIFA to see if its something they would like.

Another big feature is one that you can take advantage of right now. Madden NFL 15 comes out Aug. 26, but EA Access subscribers got to download the entire game on Aug. 21 at no additional charge. Those subscribers then get six nonconsecutive hours to explore the gridiron simulator. Your progress and accomplishments during that full-game trial even carry over when you unlock the final release.

Microsoft focusing on sports is not a new maneuver. In fact, it’s something that helped Sega make the Genesis feel like something special and different compared to Nintendo during the first console war.

Nintendo made a few sports games, like Punch-Out!!, and it even got a celebrity endorsement for the home version of the arcade pugilist release, Mike Tyson’s Punch-Out!! But Nintendo’s strategy was to bring on a big name to sell one of its existing titles. Sega came in with the Genesis and decided to do things differently. The publisher specifically went out and hired sports celebrities that it would then build games around. It had Buster Douglas Boxing, Tony Lasorda Baseball, and NFL Football ’94 starring Joe Montana.

“So many people associate Sega’s Genesis era with Sonic the Hedgehog and believe that the he was what led them past Nintendo,” Console Wars author Blake J. Harris told GamesBeat. “Well, he certainly was a big part of that equation, but sports games were also a gigantic part of Sega’s recipe for success.”

Harris has researched and written extensively about how Sega looked for a different kind of gamer to sell its Genesis system to. He thinks that what worked for that 16-bit system could work for Xbox One.

“Make no mistake, sports gamers are just as devout and tech-savvy as they come,” he said. “I think Microsoft’s approach is very clever.”

Microsoft is doing things a little differently than Sega did. Instead of chasing down celebrities and producing its own sports games, the company is simply working closely with the biggest sports-game publisher, EA. But Microsoft and Sega have the same goal in mind: reach out to a different audience.

For Sega, sports were a way for the Genesis to connect with teenagers and college students. For Microsoft, it’s a way for Xbox One to connect with people who don’t necessarily have a preformed allegiance to one gaming console or the other.

“Another interesting point is that part of the reason Sega was better able to serve the sports gamer is because the product development and marketing strategies were mostly implemented by Sega of America,” Harris said. “It was therefore able to appeal directly to American sports fan in a way that Japan-led Nintendo could not. Perhaps there is a parallel with Microsoft and Sony here. I recognize that we live in a globalized world, but I would have to assume that, geographically, Microsoft has an advantage when it comes to understanding and marketing to the American sports fan.”