Indie game studio Supergiant Games became an indie sensation with Bastion, a stand-out hit that debuted on Xbox Live Arcade in 2011 and then spread out to a bunch of other platforms. It was a rare case where an indie game company carved out its success on the consoles. Supergiant did that with just seven employees, and now it’s leveling up.

With a team of 12, the startup is self-publishing its next title, Transistor, a sci-fi themed action role-playing game on the PlayStation 4 and the PC.

Transistor comes out May 20. We caught up with Amir Rao, the cofounder of Supergiant Games, at a recent Sony indie event in San Mateo, Calif. Here’s an edited transcript of our interview.

GamesBeat: Can you bring me up to date on how well Bastion’s done? 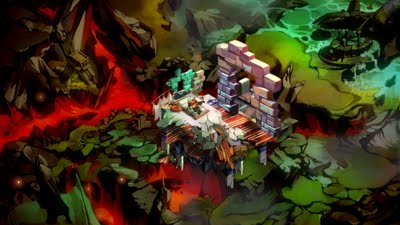 GamesBeat: Did that take a lot of your time as far as porting it to all of those?

Rao: We spent a significant amount of time reimagining Bastion for all those platforms. It was important for us to do it ourselves, because we wanted to do something where it was more than just a port, a shopped-out software port. It felt right for every single platform it came to. Bastion came out in July 2011, and I think we were done with the last version — it shipped in September 2012. It was a lot of time for the team.

GamesBeat: How large is your team now?

Rao: At the end of Bastion, we were seven people. Now we’re up to 12 on Transistor. We’re nearly done with Transistor for the PlayStation 4 and PC.

GamesBeat: Did you start Transistor around the end of 2012?

Rao: We started a little bit before that. There was ongoing work from when Bastion finished, but we weren’t really on it together as a team until sometime in 2012, where everyone was working on it full-time. 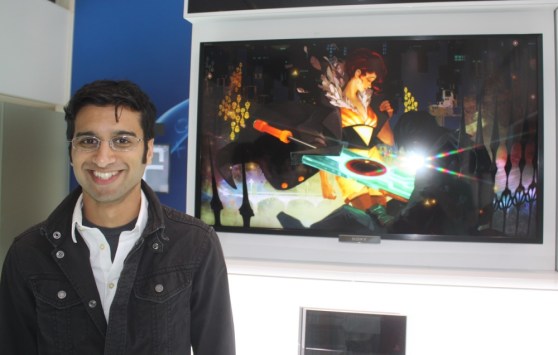 Above: Amir Rao of Supergiant Games.

GamesBeat: What was the idea behind it?

Rao: Transistor is a science-fiction action-RPG. We were interested in exploring the action-RPG genre more. We felt like there was a lot of richness there. The place we wanted to take it was to take the real, immediate feel of a real-time game and combine that with some of the strategic and tactical sensibilities that we got from old isometric games. When you’re playing Transistor, you can go in and fight in real time, but you can also pause at any time, try out your actions, dial them in, and see how it all turns out.

GamesBeat: Can you point at any particular games that influenced you?

Rao: For every different piece of it, it’s a different influence. For me personally, at least, on the gameplay side, Fallout and Fallout 2 were a big inspiration. A lot of people on the team have turn-based games that they love. They love Final Fantasy Tactics and a lot of other games. All of that is fueling some of the strategic stuff, but put into a more immediate, reactive context.

It’s still made by the same team as Bastion, and I think it bears our signature. We have the hand-painted art style. We’re using voice-over in the game in a different way, too. It’s pervasive, throughout the game.

GamesBeat: Did you decide not to do the same kind of narration?

Rao: It’s not narrated like Bastion, but there is a voice that comes from the Transistor that you hear from the start of the game. It’s a big part of what’s going on.

GamesBeat: Is that how you convey the story?

Rao: Yeah. It’s a big part — we learned a lot about storytelling from our use of voice-over in Bastion. Here we’re interested in taking what we learned and using it in a different way. 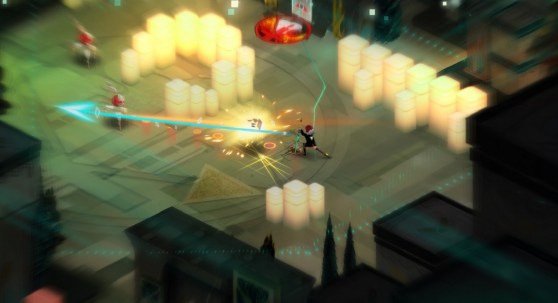 Above: Transistor, Supergiant’s follow-up to Bastion.

GamesBeat: How did you choose some of the platforms you’ve turned toward?

Rao: We were interested in platforms where we could self-publish. At the time we made the decision, the two that would allow that were Steam and PlayStation. With PlayStation, we were able to be part of a console launch, a once-in-a-lifetime opportunity. We’re all long-time console game players, in addition to PC game players, and we were really excited to do that. PlayStation gave us a path to self-publishing there. We have an enormous audience of Bastion players on Steam, and we can self-publish there as well.

GamesBeat: Is Microsoft potentially an opportunity for you?

Rao: Right now, we’re totally focused on our initial commercial release. We haven’t ruled anything out, but right now we have no plans.

Rao: Transistor will be coming out very soon, on May 20.

GamesBeat: Have the fans reacted in any particular way?

Rao: We’ve shown the game at PAX three times and E3 once. The response we’ve gotten has been tremendous. We’re really humbled. We didn’t know what to expect after Bastion, doing a new game in a new world. So far, we just want to deliver on the expectations of these people who are so excited.

GamesBeat: Are you still working out of the house in —

Rao: Yeah, we’re out of my dad’s house in San Jose. We have an office in San Francisco now, in SoMa. That’s where a lot of us work. We still have some audio guys in New York, but we’re no longer living in my dad’s house, thanks to Bastion. 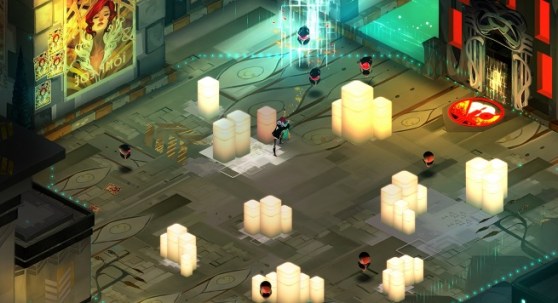 GamesBeat: Some people have referred to your class of company now as “super-indies.” I don’t know how you feel about that term or what it might mean.

Rao: For us, we don’t feel any different from when we started Bastion, when we were just two people. We’re an independent game studio. We value our independence and the ability to make our own decisions and figure out our own games and do it in our own way. Being independent is an important part of our identity. We enjoy being able to exercise that autonomy.

GamesBeat: Is self-publishing the path you want to follow going forward?

GamesBeat: Are you happy with the way things are, or do you wish that game-making could be more efficient in some way?

Rao: I’ve never been more excited for games. The kinds of games and game experiences I’m able to have across all platforms are more diverse than ever before. I play everything from Dota 2 to Last of Us. I’m playing games everywhere and having wildly different experiences in every place I play them. Now, more than ever, with digital distribution, it’s more and more possible to get something truly unique out there into the world and find an audience. I’m more excited than I’ve ever been.

GamesBeat: Is PlayStation 4 enabling you to do some things that you couldn’t before?

Rao: The biggest change for us, because we have so much hand-drawn art and giant sprite sheets for characters and animation, is the increased memory compared to the last generation. For us, the system is extremely powerful, and we’ve been able to take advantage of that. Even a small team like ours can use the extra space and extra power.