What did you buy your dad for Father’s Day this year? Did you purchase a tie or fishing rod? Or did you look to the tech industry to fulfill your needs? According to Time, some of 2017’s most popular Father’s Day gifts are items like drones and gaming chairs. This is a huge turn from the more traditional items like tools and clothing, which don’t show up on the list. Clearly, we have entered a new era in which we know that our fathers are more technologically advanced and want to enjoy themselves. This is an active shift in masculinity among our immediate preceding generation.

When I was young, I can vividly recall my dad having no idea how to set up our Nintendo 64 that my brother and I begged him for. I’m pretty sure we ended up doing it ourselves. My dad, an avid craftsman whose military background prompts him to wake up at 5 a.m. every day, couldn’t understand why we would want to sit inside and play video games instead of going fishing with him at the crack of dawn. He would lecture us about how when he was a kid, he would leave his house at 7 in the morning and come back at 7 at night. He was a survivor, an outdoorsman, a total badass. It made no sense to him that we were more interested in playing video games like Mario Kart and Donkey Kong than playing with sticks in the woods.

Well, this same guy now has more games on his iPhone than he does contacts.

The point is; the idea of the manly man has changed drastically since my childhood. The idea that dads aren’t supposed to have fun has evolved into the “dad is mom’s oldest child” stereotype. This is a positive change and one that we encounter daily. When you hear the word “masculinity” you probably think of actors like John Wayne and Bruce Willis whose careers have been made off being the everyman who saves the day. Today, the idea of being “more masculine” is becoming a negative ideal for men under 30. In a recent survey from polling outlet YouGov, an astounding 42 percent of men aged 18-24 have a negative perception of the word “masculinity.” This is a 27 percent decline when compared to the next age group, 25-49. 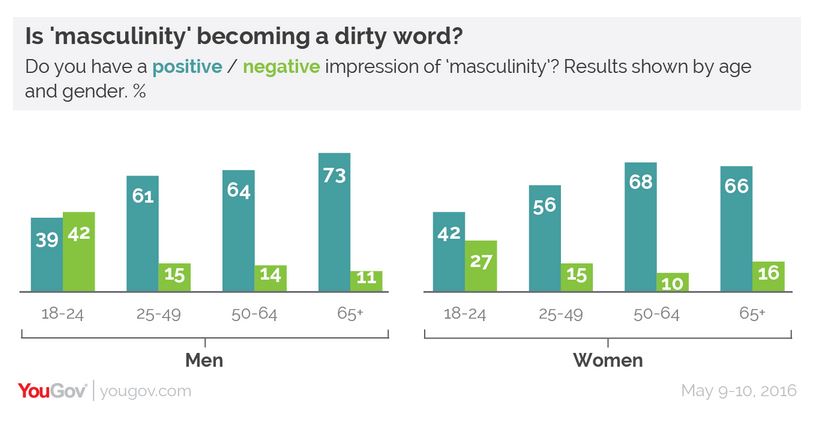 So, why are we buying our dads computer games instead of tool belts now?

It’s not that we are getting softer; it’s more about the difference in the world we live in today. A perfect example of the change in tide is the idea of being a “geek.” Just 20 years ago, the geek tag was a stain on your social life and put you in the outcast group. Enjoying board games, sci-fi movies, and playing with computers was social suicide. Being a geek was admitting that you weren’t manly enough and you didn’t fit the traditional mold. This is a fact that hasn’t escaped comedian and geek icon Chris Hardwick. “When I was growing up there was nothing cool about being a nerd. You had to hide from people and keep it inside,” he said. “… And that’s no longer the case! Nerds are powerful; like, pop culture is run by nerds. Like, even the redneckiest of rednecks has a smartphone.”

Today, those geeks from the ’80s and ’90s have moved the world further in 30 years than the previous three generations of “manly man” who ate nails for breakfast and glass for dinner, did in 100 years. It’s OK to be a geek today. It’s acceptable. Most of the world’s young billionaires are tech geniuses who played computer games when they were kids, and those “geeks” unknowingly fought for today’s perception of masculinity.

Where we are today

The fact is, we are a much more tech-savvy culture today and that has severely changed the meaning of masculinity. While our fathers are certainly less tech savvy than we are, they are miles ahead of their fathers who still think the cordless telephone is impressive. I’m exaggerating, but you get the point. A big thanks should be given to the twentysomethings of today who have helped shift their parents into a more technological mindset, but we shouldn’t forget the path paved by the “geeks” and “nerds” of the ’80s. Playing video games, being good with computers and having an interest in tech is not this black cloud like it was back in the ’80s and the popularity of these interests is proof. The gaming industry is a great example of this.

The Entertainment Software Association’s 2016 report shows that gaming is an adult hobby. According to their 2016 report, 44 percent of gamers are over the age of 36 and another 29 percent of gamers are in the 18-35 segment. That is an astounding 73 percent of the gaming community that are out of high school and legal adults. This poll includes demographics across all devices including mobile devices. Not surprisingly, the most popular game genre for mobile devices are puzzle/card games while the most popular genre for gaming consoles are shooters, most notably Call of Duty whose Black Ops 3 was the best selling game in 2016. Following Call of Duty was Madden NFL 16 whose success can be directly connected to the success of the NFL in the United States which last season saw a 23 percent jump in net revenue. Both of these titles have huge followings and are very popular in the competitive gaming community, where the average age of players is about 27.

In summation, there has been a clear shift in our perception when it comes to the importance of masculinity. Men are no longer worried with how their interests will reflect on how people perceive their level of “manliness.” This change started nearly 30 years ago when computer games made their appearance and gave the more analytical man a form of entertainment. It is no coincidence that the 18-34 demographic is much more worried about enjoying themselves than being “masculine” and it seems like the 35-plus demographic isn’t far behind based on their recent purchasing patterns. So this Father’s Day, dads didn’t always get ties–they got something techy.

And then they made a horrible joke about it because no matter the gift, dad jokes will always happen.

Kyle Portman is an Interior and Exterior Design Consultant based in Canada and has been working for himself since 2012.