The giant company’s acquisition of King is the biggest merger in gaming since the combination of Activision and Blizzard in a nearly $19 billion deal in 2007, and it cements the new publisher as one of the biggest players in every gaming platform — home consoles like the PlayStation 4, PC online games like World of Warcraft, and mobile.

“This is huge. It creates the biggest games powerhouse in the Western world, only second to Tencent on a global scale,” said Peter Warman, the chief executive and game analyst at market researcher Newzoo. “With game publishers becoming true cross-screen and transmedia companies, this is a huge move and gives Activision Blizzard a unique reach across all screens on a global scale.”

“The most appealing of the acquisition is how complementary it is even though 51 percent of 48.5 million Activision Blizzard players in the U.S. also played one of the key King franchises in the past three months,” Warman said. “Another 32.8 million of 57.3 million King players form a new audience to the new merged company.”

As for the price that Activision Blizzard paid, Warman said, “People who think the valuation is too high are wrong. One value element is a complementary pipeline in terms of game in development. On top of its Saga series, King has been rumored to have several midcore games [those that add more traditional elements but still work in small, mobile-friendly time chunks] in development that will see daylight soon. I am certain Activision Blizzard has taken a good look at this and taken this into account in the valuation.”

He noted that King’s experience in running and monetizing mobile games as a service is a priceless assets for Activision Blizzard, which makes money for the most part in the traditional way, selling games at a fixed price. In mobile, free-to-play service models rule.

VB Insight analyst Stewart Rogers points out that while the $5.9 billion price isn’t that expensive, when put into a perspective, the deal does have some issues that both parties will need to heed going forward.

“If you look at the deal from a pure numbers perspective, it isn’t that expensive for Activision Blizzard, and it gets them into the mobile market quicker than trying to build it themselves. But there are some issues that Activision Blizzard need to address.

“If you compare King to, for example, Supercell, the former has produced 1.5 times the revenue of the latter, but with 1,200 staff versus just 150. And, of course, there is still the issue of King having all its eggs in one, candy-lined basket. King need to have another hit, and soon.”

The deal also turns around a slow year for game deal makers. Digi-Capital, a tech advisory firm, said in its recent report  that in the first nine months of 2015, game investments, mergers, acquisitions, and initial public offerings were collectively down 82 percent compared to a year earlier.

“We thought that a few big deals could turn things around before the end of the year, and the Activision Blizzard/King deal has certainly done that in terms of the headline figure for games M&A,” Merel said. “It also fits in with the industry structure that has emerged in the last two years, where games leaders will continue to dominate the $45 billion mobile games revenue we forecast by 2018. This one deal could be a catalyst for further large scale consolidation in the next 12 months, but it could also prove to be an isolated mega-deal in an otherwise quiet market.”

As for what this moves means, Merel said, “The critical question will be whether other major industry players see this deal as fundamentally altering the competitive landscape, or whether it is simply the bringing together of two market leaders with complementary businesses.”

On the specific deal, Joost von Dreunen, the chief executive of market researcher SuperData Research, said in an email, “It’s a smart move by Activision, because it gives them access to a massive audience on mobile. With Hearthstone, World of Warcraft, Call of Duty and Skylanders, Activision has strong titles that appeal to most of the key audience segments.”

And by adding the Candy Crush maker, von Dreunen points out that Activision has firmed up an important demographic: women.

“By buying King, it now also has a portfolio with a strong appeal for women. Already [King CEO Riccardo] Zacconi has commented on the access to Activision’s intellectual property, suggesting that this was a key part of the conversation. With mobile user acquisition reaching $3.85 [per user] on iOS and $3.47 on Android, a picture emerges in which this new mobile division can leverage the strength of both companies to maintain its leadership position in the mobile market.”

SuperData noted that the Candy Crush series has generated $4 billion for King, with a profit margin of 40 percent. Adding King gives Activision Blizzard a stronger position over the next five to 10 years as the console market follows a cyclical decline, von Dreunen said.

“Despite the increased emphasis on China as the leading games market, it remains difficult for Activision to do well there,” he added. “One has to ask: Why haven’t we heard more about Call of Duty Online? Combined with the fact that it was forced to partner with Tencent [a competitor and investor] in order to gain access to this market, it makes more sense to, instead, bolster their position in the West. At the same time, we see a growing interest from major Asian publishers to acquire market share in Europe and North America. King would have been a key asset for a company like Tencent.”

“The King buy is a little steep for Activision at first glance, but Activision would have seen more competition for the purchase had they waited for a better price,” Pidgeon said in an email. “Both parties should see great value in working together. King’s powerful performance with Candy Crush Saga has raised expectations steeply for successive titles and development of new franchises, so access to Activision’s resources and franchises will help King leverage free to play design and data wrangling wins achieved with CCS to build out a successful catalog. Activision will gain momentum it needs in casual/mobile worldwide. ”

Pidgeon added, “The casual mobile market has always been ripe and active for M&A, but this deal signals an increase in potential and scale going forward. I think we’ll see more large players being bought for big money along with consolidation on all levels. Independent developers will need to spend more to gain impact and will be less likely to launch successful new games without significant help, but can gain greater prospects as acquisition targets.”

Adam Krejcik, analyst at Eilers Research, was critical of King, and he said he had mixed feelings about the deal. He noted that King has underperformed since it went public at $22.50 a share in March 2014, and the price that Activision Blizzard paid at $18 a share was a 20 percent discount to the IPO price. He noted that King has $900 million in cash, so the transaction value of the deal is more like $5 billion.

“If it wasn’t already abundantly clear, King should have never been a publicly traded company,” Krejcik wrote in a research report. “The IPO was egregiously mispriced, and the company has faced multiple downward earnings revisions since going public due to its dependence upon a single franchise [Candy Crush Saga].

“Moreover, the downward trend does not appear to be abating as Q3 bookings are expected to decline 8 percent year-over-year, and Q4 guidance calls for a 17 percent year-over-year decline in bookings. This largely stems from attrition in Candy Crush Saga and Candy Crush Soda Saga [combined accounted for 66 percent of total Q2 bookings]. No new King games/IP have come close to replicating the success of these popular match-3 games.”

Krejcik said the biggest winner is Apax Partners, an investor that owns 43.8 percent of all of King’s shares. 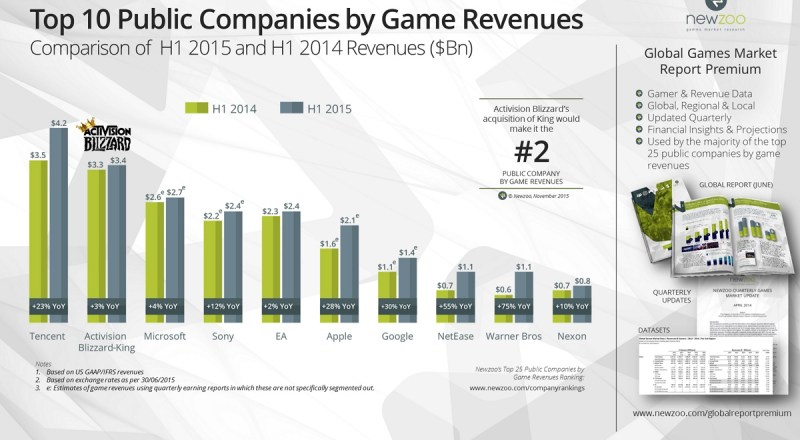 Above: The Activision Blizzard and King merger will create the No. 2 game company worldwide.