Today is the last day of the A Maze festival in Johannesburg, a celebration of the international indie developer scene along with games by homegrown designers from all over Africa. This year is its sixth year, and it ran from September 13 to September 17.

Thorsten Wiedemann started A Maze in Berlin in 2008. The name is a riff on the words “amazing” and “labyrinth,” a combination that’s meant to be playful. His path to indie games has been an unorthodox one. The occupations he’s had include: ski jumper, programmer, radio show host, bartender, talk show host — and others. Last year, he spent 48 hours inside a virtual reality world as part of an art performance called Disconnected.

In Wiedemann’s varied career, he’s been involved with other events, such as the Berlin International Film Festival, and he says he’s always been interested in new media, game art, and 8bit music. Naturally, he was hooked when he discovered the indie game scene in 2007. He started A Maze to showcase indie games to a wider audience, but also to help developers network and connect with each other. Now the festival takes place yearly, once in Berlin and once in Johannesburg.

“My main goal was to build an annual festival in South Africa and create that two-way bridge between the festival in Berlin and Johannesburg,” said Wiedemann in an email. “The festival should create visibility, cultural exchange, interdisciplinary collaboration and international networks on a creative and artistic level that [is also] inspiring for greater business opportunities in the country and [globally].”

In addition to showing off games, A Maze features a number of panels and speakers. Program manager Ben Myres, who co-founded the indie studio Nyamakop, plans the talks along with program assistant Sithé Ncube, a cofounder of the Ubongo Game Lab in Lusaka, Zambia.

“For the program of talks/workshops, it’s always a hard balance to find,” said Myres in an email. “We want to give local creators a voice and a place to experiment; bring broader African creators to share their perspectives; expose international creators to African ideas and vice-versa; while also compensating for things lacking in the scene.”

Myres has been unofficially involved with A Maze for around four years, and last year he officially took on the role of program manager. In addition to organizing the speakers, Myres works with Wiedemann and their exhibition coordinator Steve Walt to decide on which games to feature on the show floor. He says that this can be tricky, since they want to highlight games from African creators. But it’s also an international event that has to draw developers and attention from abroad. Sometimes, there are “culture clashes” between the different titles on display. 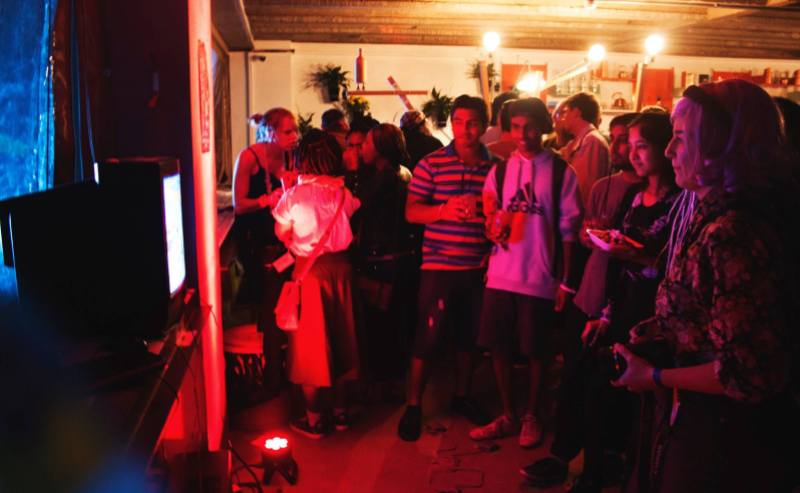 “Curating broader African work, you really have to reconsider and contextualise how you assess ‘quality’ of a work,” said Myres. “Mechanically, a game out of Africa might not always be inventive or well-crafted, but the thematic and representational value of the unique African perspectives and experiences contained can be explosively original.”

At the same time, Myres says they want to bring in “experimental, inspirational” international games that can lead to new ideas.

“The speakers and games are very inspiring and fill attendees with ideas and motivation,” said Wiedemann. “It is very important to for me create a safe but vibrant platform where the community and also the industry and flourish and grow into the right direction by not feeding the mainstream, but creating pink, weird, and thought-provoking games and playful media.”

What does “pink” mean exactly?

“Pink is an open, playful but provocative color, very powerful… it also means to me interactivity, confrontation and positive chaos,” explained Wiedemann. “The pink is also inspired [by the] John Waters movie Pink Flamingo…I like to see games going as well into that direction”

This year’s festival featured a variety of games from African developers as well as creators from abroad. Blind Drive, from the Israel-based studio Lo-Fi People, charges you with driving based only on audio cues and instructions. The Orchard, from Kenyan studio Broken Helmet Entertainment, is a survival game at an off-the-grid farm. All You Can Eat by Gamechuck hails from Croatia and looks like an interactive comic strip. Frog Smashers by South Africa’s Mike Scott and Ruan Rothman is a multiplayer brawler about “the downfall of frog civilization.”

The South African studio Free Lives will also be showing off all their portfolio of work, including the tongue-in-cheek multiplayer run-and-gun game Broforce, which the indie-focused Devolver Digital published. Crystal Farmer, who’s currently getting her masters degree in social anthropology, gave a talk titled “Studying game dev culture as an insider-outsider.” She says that the games industry in South Africa is growing very quickly, and she’s spent time with a local studio to learn more about what she calls a “complex and varied” space. She’s found that the South African community has to tackle some of the same issues as their cousins abroad, but they also face unique challenges.

“I think that there are some similar issues across the board, because video games are almost inherently global. Gender inequality is what pops into my mind first, for example,” said Farmer. “What makes South Africa’s game devs unique, however, is their resilience and drive to rally together and thrive within a landscape crisscrossed with terrible internet infrastructure, misinformed policymakers, racial tension, and precarious employment. There is a push to include marginalized game developers where access to material resources, knowledge and support networks is worryingly unequal.”

Myres says that it’s true that they have to deal with things such as power outages and poor internet connection. But he’s ultimately optimistic about the scene’s success.

“Johannesburg could be a games powerhouse in the next five-to-10 years if fledgling studios were given a reason to stay and recently graduated students were given an infrastructure to create small vertical slices of games,” said Myres. “That’s the dream that A Maze has been moulding since 2012 — that making your own games, even when weird and strange, is innately satisfying and worthwhile. Now it’s just time for us as the local community to make it work as a sustainable scene.”

This year, Wiedemann says they’re expecting more than 2,000 visitors from the general public to attend A Maze. They’re also hosting 250 developers and professionals from 17 countries. He says that, more than ever before, people are studying game design — such as at Wits University, whose Digital Arts department has 150 students enrolled.

“Games are more than entertainment, they should play with reality, being honest and asking questions,” said Wiedemann. “This is what artists [are] doing: asking questions [about] what surrounds them. We like to reach out to everyone who loves artistic expression and most of the visitors are inspired or extend their perceptions of what games can be.”