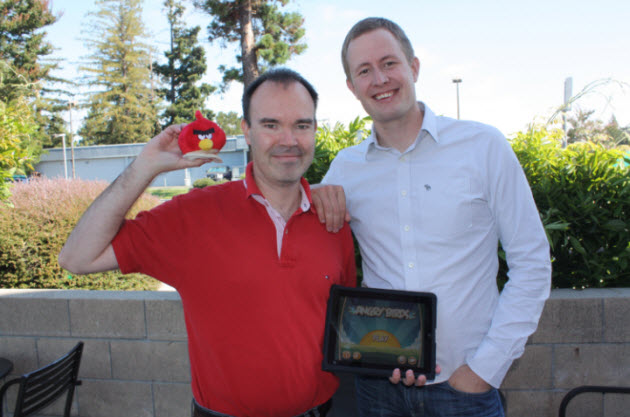 The $42 million investment in Angry Birds creator Rovio could be a watershed event for mobile games.

The deal shows that at least one mobile game company is able to attract marquee investors and a valuation (as yet still unknown but undoubtedly big) that social game companies attracted in their run-up to the big time. At some point, the industry will flip, with Facebook becoming the smaller part and mobile becoming the bigger part, since the number of mobile phone users is something like five times the number of Facebook users.

In mobile gaming, upstart companies are readying themselves to battle with established giants to become multibillion-dollar mobile game companies. This may sound like the bullish investors are smoking crack. But bullish observers believe the battle has begun and will play out over the next couple of years. Neil Young, chief executive of Ngmoco, said last week in an interview that he believes multibillion-dollar companies will be created in this market in the next couple of years. Rovio itself is perhaps the most bullish of all, since it is closing in on 100 million users.

Besides Rovio, the contenders include Electronic Arts, Zynga, and DeNa, which fired the first shot across the bow when it bought Ngmoco last summer for up to $403 million. Others are moving into the game. Marc Andreessen’s venture firm invested $18 million in mobile game publisher TinyCo just a week ago. Digital Chocolate, an established maker of cell phone and social games, raised $12 million earlier this week. Pocket Games raised $5 million from Sequoia Capital in December. There are lots of chess pieces in motion.

“We were approached by a lot of people and talked to a lot of investors,” said Peter Vesterbacka (pictured top left), the Mighty Eagle at Rovio, responsible for business development. “We were in a good position because we didn’t need the money. The money was not the key thing here. It was more about getting the right people involved. We wanted people who bought into our bigger vision. A lot of people don’t see beyond an iPhone game. What we are trying to do is build an entertainment franchise. We believe we can build this into a multibillion-dollar ecosystem.”

Rovio’s investors include Atomico Ventures, the venture fund created by Skype co-founder Niklas Zennstrom; Accel Partners, the veteran VC firm that invested in Facebook; and super angel fund Felicis Ventures, headed by Aydin Senkut. They slowly came around to a meeting of the minds with Rovio. 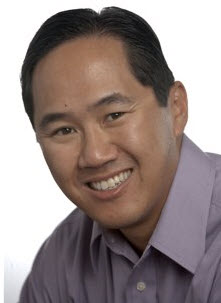 Rich Wong, a partner at Accel, said he had known Vesterbacka, who joined Rovio in the spring of 2010 and was a former HP manager, for a long time. Wong caught up with Vesterbacka, who formerly worked at Hewlett-Packard, at our MobileBeat conference last July, about the time when Rovio was starting to go public with all of its success with Angry Birds. Vesterbacka also met Senkut at MobileBeat.

They started a conversation and began the slow process of earning trust, Wong said. Rovio was an eight-year-old company that had worked on 51 games before Angry Birds. That helped Wong and his partners get over any fear that investing in a game company could be a highly risky thing, since there were no guarantees that a game company could be more than a one-hit wonder. Such fears had stymied VC investments in games for many years until recently. Rovio had a team of veterans in place in Finland.

Originally called Relude, Rovio began as a mobile game firm started in 2003 by three students from the Helsinki University of Technology: Niklas Hed, Jarno Vakevainen and Kim Dikert. They had participated in a mobile game competition sponsored by Nokia and Hewlett-Packard. Vesterbacka, then at HP, was one of the judges, and he suggested the trio start their own mobile game company. They did so and got Digital Chocolate to publish the game, King of the Cabbage World, on cell phones. They started doing work-for-hire games such as Need for Speed Carbon for Electronic Arts. Mikael Hed (pictured top right) joined them as CEO in early 2009 and steered them toward making internally produced games they could own. They hired subcontractors to do their work-for-hire jobs so they could free a team to focus on new iPhone games. 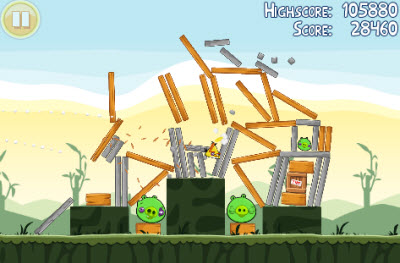 They wanted to exploit the iPhone’s hardware, such as its touchscreen, and create memorable characters. They conceived Angry Birds — where the player would slingshot birds with bushy eyebrows at green pigs in fortresses — and targeted at everyone. They focused on every detail and wanted to get the slingshot game mechanic just right. They paid attention to details, such as the animations of the birds crashing into the pig fortresses and the laughter of the pigs whenever you failed to demolish them.

They launched the game on the iPhone in December, 2009, via Chillingo, a mobile game publisher. It caught on in Finland first and then became a hit in Sweden. It hit No. 1 on the App Store in the United Kingdom and then made its way to the top of the charts in the U.S. The title spread through social media and Apple featured it in the App Store. People began tweeting about Angry Birds every minute. 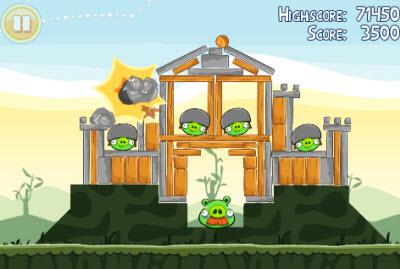 Vesterbacka talked to Mikael Hed about joining Rovio and said he would only do it if the company was committed to making Angry Birds into something huge. They all agreed on the larger vision. Jim Breyer, the Accel partner who helped land Facebook in the venture firm’s portfolio, knows a lot about betting big. He told the Rovio leaders about his experience on the Marvel board of directors. Marvel grew up as a comic book company, became huge with movies, and then took creative control of its own properties by bringing movie production in-house. It pretty much came to own everything.

That’s what Breyer suggested for Rovio. Vesterbacka said that advice was useful and that the company is now thinking seriously about how to build itself up so that it can retain more creative control and not dilute the brand with small-time efforts.

“Like the Marvel experience, you have to do a lot of stuff yourself,” Vesterbacka said. “We realize we have to do that. There are a lot of things that we just can’t outsource to others. Niklas Zennstrom also immediately got the vision of what we wanted to do, as did Aydin.” 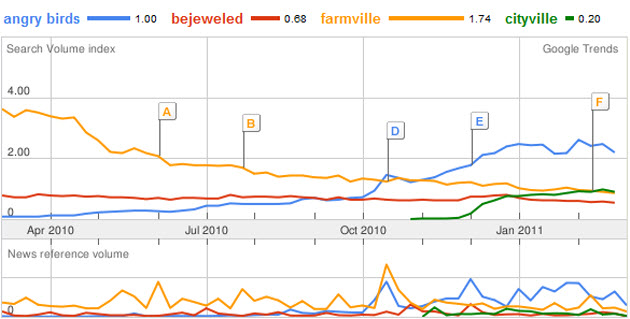 The potential for Angry Birds reminded Wong of the star of his Santa Rosa, Calif. hometown, Charles M. Schulz, the creator of the Peanuts comic strip, which ran in newspapers from the 1950s to 2000. Wong went to an ice rink that Schulz owned and the museum in his honor as well (Schulz died in 2000). Peanuts became a multigenerational brand. Angry Birds has a way to go before that happens. But about 40 million Angry Birds fans play the game each month. And roughly 200 million hours are spent with the game each day.

It became clear to everyone, including Accel, that Angry Birds was growing into a cultural phenomenon. As you can see from this Google Trends chart, the awareness of Angry Birds began to surpass Bejeweled in October, and by November it blew past FarmVille, which at the time was the most popular game on Facebook. Google Trends show how many people are searching for a term and is a good measure of the changing awareness of a subject.

“Could Angry Birds become the Peanuts of this generation?” Wong said. “My mother-in-law plays it. It absolutely can. In the past decade, I can’t think of anything except Twitter that has become so popular so quickly.”

Vesterbacka said in interviews that Rovio’s plan was to treat the game as a franchise, similar to the way that Nintendo treated Mario or the way that Disney handled Mickey Mouse. The company made plush toys with the Angry Birds characters and started talks about TV shows or a movie. Then it came up with Angry Birds Seasons, a free game that had constant updates based on seasons or holidays. And it announced that it would create Angry Birds Rio, a new game connected to the upcoming Rio animated film being released April 15. The relationship with Twentieth Century Fox enabled a cameo appearance by the Angry Birds characters in a Super Bowl commercial.

“Our main goal is we want to make Angry Birds part of pop culture,” Vesterbacka said. “We have come a long way toward that goal. Once we do that, the money and other opportunities will follow. We don’t optimize for short-term profits.”

The more successful Angry Birds has become, the more it has generated solid revenues and profits for Rovio. And the less it has needed venture capital money.

“Whether we should do the deal was no longer a question,” Wong said. “Convincing them was the hard part.”

Rovio also talked to the established game companies in the video game market. But Vesterbacka said, “We didn’t meet with any company that we felt could make us move faster toward our goal.”

As Rovio moved to new platforms, it began dealing closely with the portfolio companies of Accel. On Android, Rovio launched an exclusive on GetJar, the independent app store and one of Accel’s investments. It also had to rely on advertising through Google’s AdMob division, which was also an Accel investment before Google acquired it. Accel was clearly in-the-know when it came to mobile investments and how to craft multi-platform strategies. After months of talks, everyone finally agreed to do the investment.

“Every VC says they add value,” Wong said. “But this was a good combination.”

Rovio will use the money to grow to 100 or 200 people this year. The company will create a presence on Facebook, but that will be part of a larger web strategy that includes a stand-alone Angry Birds web site. Rovio may create games around spin-off characters, such as the green pigs or the Mighty Eagle. Rovio is going to milk it until Angry Birds are everywhere — or we all get sick of it and move on to something else.

And at some point in the distant future, Rovio may get back to creating original titles beyond Angry Birds. That’s the only way to create something that could be bigger than Angry Birds.

Disclosure: Felicis Ventures is an investor in VentureBeat.