Harlin: The way the score broke down, 2K asked me to score the cutscenes and the thematic material. They asked Jim to tackle the interactive, ambient, and combat music system in the game. What you’ll find is that on the soundtrack, the cues more or less alternate back and forth between Jim and me.

Something like “Eleventh Hour Blues” is put together from a sense of telling a story through what’s interactively based on enemy awareness of the player’s activity. Something like “A Kind of Peace,” that track is, I think, mostly music that gets used in-game behind Father James and all the moments where he’s talking to the camera about his past and about the impact Lincoln Clay is having on his world and on New Bordeaux. It goes back and forth like that, between the two functions of the music.

Above: Lincoln Clay and Thomas Burke in Mafia III

GamesBeat: A lot of the job, I suppose, is to take the player back in time to this era. That’s the ambient music. And then you have things like the combat music, which set a mood.

Bonney: And also to amplify the experience. If there’s a way we think we can make the player experience more rich, we’re going to try to do that by adding music to that moment.

Harlin: As composers, we’re basically storytellers. We just don’t use language. We use music. Everything we do is in service to the story that the game team is trying to tell. We do that by trying to augment and support with a foundation, an emotional underpinning, for everything else that’s going on. It impacts every decision we make as we’re writing music.

GamesBeat: To me, it seems like an ultimately tragic game, where your main character goes down this road to hell and doesn’t really look back. Would you say you tried to match the music to that arc?

Harlin: It’s a dark story, but it’s also set in a dark time. It’s almost a necessity, to tell a dark story there. When I read through the script for the first time, I was blown away by the quality of it as a story, and as a game story, a story being told interactively. I adore video games. I don’t consider myself a film, TV, and game composer. I’m a game composer. I’ve been doing this for 18 years. I don’t know of another story like this in games, something this impactful.

Working with Haden and Matt at Hangar 13, they were insistent on—I think that’s why they wanted to go this route with the score. They didn’t want to go with the funk score that I suggested, or the rock score. They wanted something that would feel heavy and impactful, just like the story they were trying to tell. 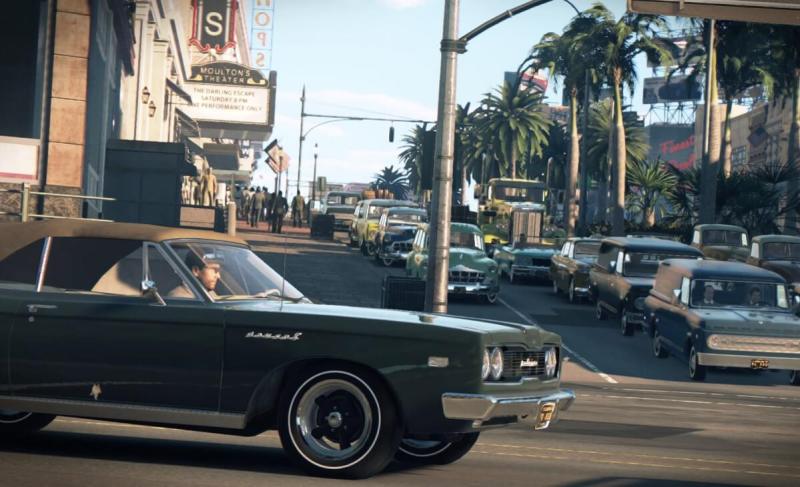 Above: I found myself driving around just to listen to music in Mafia III.

GamesBeat: As far as where your music fits versus where the licensed music fits, can you talk about that a little?

Harlin: As I say, I wasn’t involved with the decisions in where to put the licensed music, but I was very impressed with the fact that they wanted to place licensed music in the score like they did. In part because, whether it was conscious on their part or not, it’s very reminiscent of what was actually happening in film scores in the late 1960s.

If you take a look at the time period, you have a movement among these kind of renegade Hollywood directors – Scorsese, or George Lucas with American Graffiti – movies like The Graduate or Harold and Maude, these films used pop songs as part of their score. And not pop songs that we’d call indie or alternative nowadays. It set a tone for back then.

Even now, when you look at a lot of Vietnam movies, Vietnam films seem like they tend to not have a lot of underscore in them. They have a lot of pop music in them, like Full Metal Jacket, Platoon, Apocalypse Now. Kubrick does it too. He scored 2001 using classic music that was pre-composed for other things, placing it in his film. It wasn’t the kind of typical film scoring that had been done for decades before that. It was a new way of thinking. Let’s take existing music from out in the world and put it in a movie and see how it impacts. Tarantino does it most notably nowadays, but it was very much a thing in the late 1960s. I thought it was so hip that 2K ended up doing that for a game set in 1968.

GamesBeat: Where did you find that Vietnamese instrument, by the way?

Harlin: It’s a combination of research through things like Wikipedia and then finding sample libraries online. The sample set I found was pretty limited in what it could do, but you figure out how to write to what you’ve got. I wasn’t going to make it a constantly featured thing. I just wanted it to be a texture that appeared every now and again in the background. When 2K heard it, they liked it, and they asked me for elements of it so they could use it in other places in the game. That’s how it ended up being that little stinger sound effect that happens every time you cross into enemy territory.

GamesBeat: How much original music is there? I don’t know if it’s measured in minutes or anything like that.

GamesBeat: The loading screens, is that where you’d hear something specific every time, or is that always a change?

Harlin: I think it changes. I think the way Matt handled the implementation of the loading screens is there’s a randomized playlist of cues that—each time it goes to a loading screen, it fires off this bucket of cues and pulls randomly from there. I’m not sure how many are in there. I know it’s a number of them, maybe 10 or more.

GamesBeat: Was that a pretty big challenge, the volume of music you had to supply?

Bonney: I’ll answer “yes.” [Laughs] By the time the team was solid and knew what they wanted to do, it was time for Jesse and I to sprint.

Harlin: Yeah, it was. What was more of a challenge for me was—it wasn’t so much that we had that much music to write. It was the notion that we were then going to record all of it live. That was an enormous undertaking. It took a tremendous amount of logistical planning to figure out what would be the right way to do it, the right place to do it, the right order of songs to record in, the right order of instrumentalists to bring in on a particular day. Everything took a ton of forethought before we got into the recording studio. Once we got into the studio, it was a Herculean effort to keep the whole thing on track.

Writing it is a huge task, but it’s about a third of the task. After you’ve written it all, you have to go and make it real. That, to me, felt like the real giant scary bit. 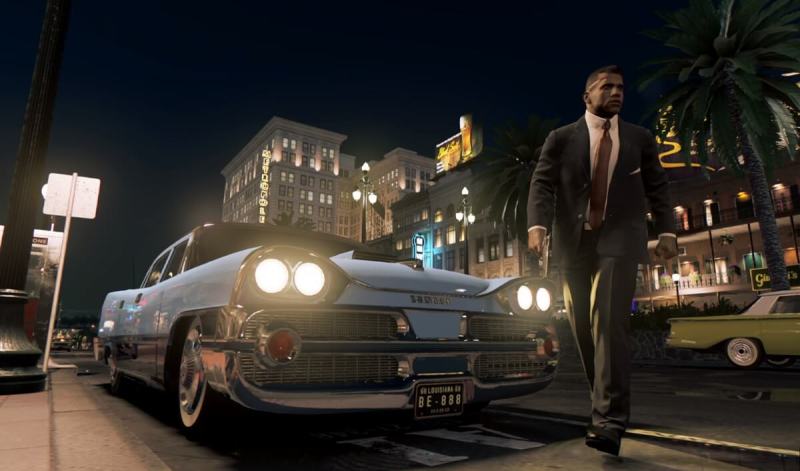 Above: Lincoln Clay is the star of Mafia III.

GamesBeat: Did you have to go back and redo anything several times? Was recording an iterative process?

Harlin: Not recording, no.

Bonney: During the demo part, though, yes.

Harlin: We wrote every cue before we went to Nashville. Everything had to be approved and that was an iterative process. We had to do a demo of every single cue we did. Once those demos were all approved, then we had a road map to follow. You don’t get multiple chances with the recording process. If something doesn’t go right, you just get what you get. You have to get it right the first time.

Bonney: Talking about an iterative process, for me it was pretty binary. I was just writing songs. There was maybe only one that we iterated on. Otherwise it was more me self-editing. I probably wrote more than 100 songs. I didn’t send in nearly that many, because you get far enough into something and realize, “No, this isn’t going to work.” But they would listen to things, and if they liked it, good, and if they didn’t, it was back to the drawing board.

GamesBeat: One good thing about the long loading screens, I guess people have to listen to this a lot.

GamesBeat: Especially those of us who are less skillful as players. We keep doing the combat over and over.

Harlin: I’m one of those people too. It’s funny. When the game first launched, the very first day, I was playing it on my PS4. The PS4 has this thing it’ll do where it tells you it has downloaded enough of the game that you can start playing it. I’ve never done that before. Usually I just wait for the whole game to download, but I was excited to get in and play the final game. So it said, “Okay, you can start it up,” and I did, but it wasn’t quite right. All it did was hang on loading screens.

I didn’t know it was going to do that, but I had fired up Facebook Live and I was going to live stream myself playing the final game for a moment. The loading screen kept going on and on and the music was playing. The actual game never came about, but what ended up happening, I wound up doing about 40 minutes of commentary track about the music. It would play different pieces, people kept joining and asking questions about the music, and I kept talking about pieces and cues. It became this strange little music workshop, because the game hadn’t finished downloading.

Bonney: I was wondering about that. I thought that was brilliant. 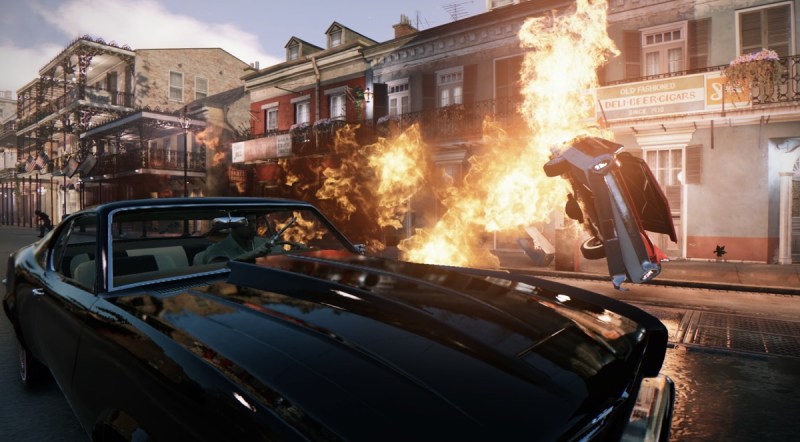 GamesBeat: Have you heard any interesting feedback from players about the music?

Harlin: I’ve heard nothing but praise, which has been very heartwarming. The reviews have called out the soundtrack time and again as a 10 out of 10. When a review wraps up and they list all the things you should make sure you don’t miss, the soundtrack is frequently mentioned, which is pretty awesome.

GamesBeat: Is there anything else you’d like to mention?

Harlin: We had a blast doing this. It was a lot different from anything else we’ve done. I don’t know of another game score that sounds like this. It was fun to work on and fun to work with Jim. I’ve spent most of my gaming career writing music for Star Wars. In some ways, there were things that were very similar. It was about telling a story and all these thematic elements that interweave. But being in the deep south in 1968 is about as far as you can get from a galaxy far, far away. It was an amazing experience to be able to do that.