As general counsel of the Entertainment Software Association, Stanley Pierre-Louis was the top lawyer in the country for the trade group that protects the interests of the video game industry. He stayed out of the spotlight, but he had to stay sharp on a lot of legal issues affecting the largest and smallest video game publishers.

But after Mike Gallagher left the CEO job last October, Pierre-Louis was named acting CEO of the ESA. And now he is stepping into the spotlight. At the recent DICE Summit, the elite game event in Las Vegas last week, he gave a talk about the sensitive topic of video game addiction. Last June, the World Health Organization rained on the post-E3 afterglow by proposing to treat compulsive video game playing as an addiction, subject to treatment as a medical disorder.

Pierre-Louis thinks that’s a bad idea because it isn’t supported by a preponderance of medical evidence. I talked with him about this after his talk, and probed into why it’s appropriate for parents to have conversations with their kids about too much screen time and why it isn’t OK for the WHO to treat the condition as a medical problem. When the WHO gets it wrong, it can have dire consequences that lead to risks of regulation, misdiagnosis, stigmatization of game playing, and even sending kids away to harsh treatment camps in some countries, he said.

We also talked about a variety of other subjects, including the federal government’s interest in gaming, the competition with other countries for video game jobs, possible trade conflict with China, the classification of loot boxes as gambling in some territories, unionization, and how the U.S. games industry will stay competitive.

Prior to joining the ESA, Pierre-Louis was associate general counsel at Viacom. Earlier in his career, he was the legal boss at the Recording Industry Association of America. There, he led several strategic copyright litigations, including the entertainment industry’s litigations against MP3.com, Napster and Aimster as well as the landmark U.S. Supreme Court case MGM Studios v. Grokster, which resulted in a unanimous decision in favor of the film and music industries. 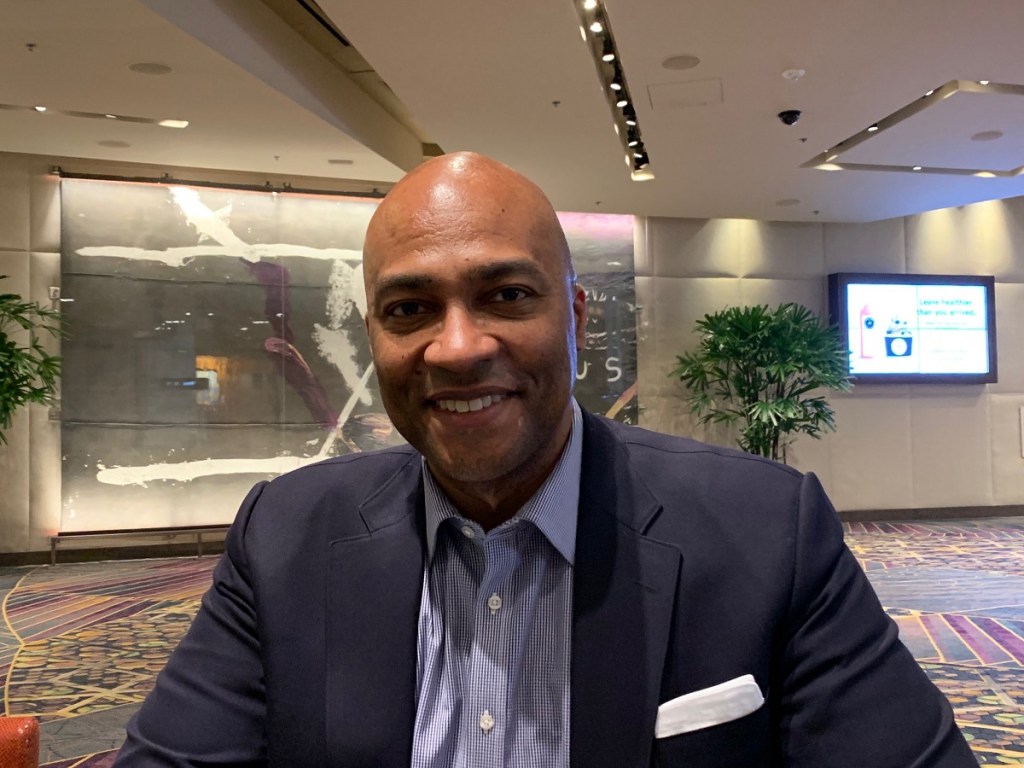 GamesBeat: Are we going to end up with a Department of Games in the federal government?

Pierre-Louis: Each administration takes its own tack on how they prioritize tech. What we’re seeing a lot of now — there was an announcement yesterday or today from the White House about their focus on AI. Obviously privacy is a big topic in Washington. What we’ve been trying to do is share the power of games for entertainment, for our economy, for education, for health care. Just talking about the full bouquet of issues where games help. It’s been a message that resonates.

GamesBeat: Are you interested in a permanent version of this job?

Pierre-Louis: I’m excited to serve in whatever capacity I can do for this organization. It’s been a thrill and it’s going to continue to be a thrill, primarily because we have amazing members who are making exciting games and care about our issues. We have an amazing board that wants us, even in this interim period, to press forward with the important mission of the organization. We have amazing colleagues who are super smart — lawyers and analysts and lobbyists and PR folks — and they all love games. We have people on staff who compete in game tournaments. It’s an exciting time to be at ESA and in this industry at our level.

GamesBeat: I thought your topic was interesting, about the WHO controversy there. You’re a parent, right?

Pierre-Louis: Yes, I am.

GamesBeat: I’m a father of three girls. Parent to parent conversations, I think, don’t get so much into the legalistic side of things, but generally speaking, I think parents will be very concerned and talk a lot about addiction. With my kids, I talk to other parents about how much screen time you want them to have, what kind of games are appropriate for them at certain ages. We talk about that using the word “addiction.” I can see the reason to stand up and say that there is no addiction to people who want to regulate a business. But I do wish we could have more of this parent to parent kind of conversation, where people acknowledge that there are some things you want to control and not have getting out of hand. I can understand why the ESA wants to take a legal stance toward the WHO, but I think it would also be helpful to have the ESA help with that parent conversation. 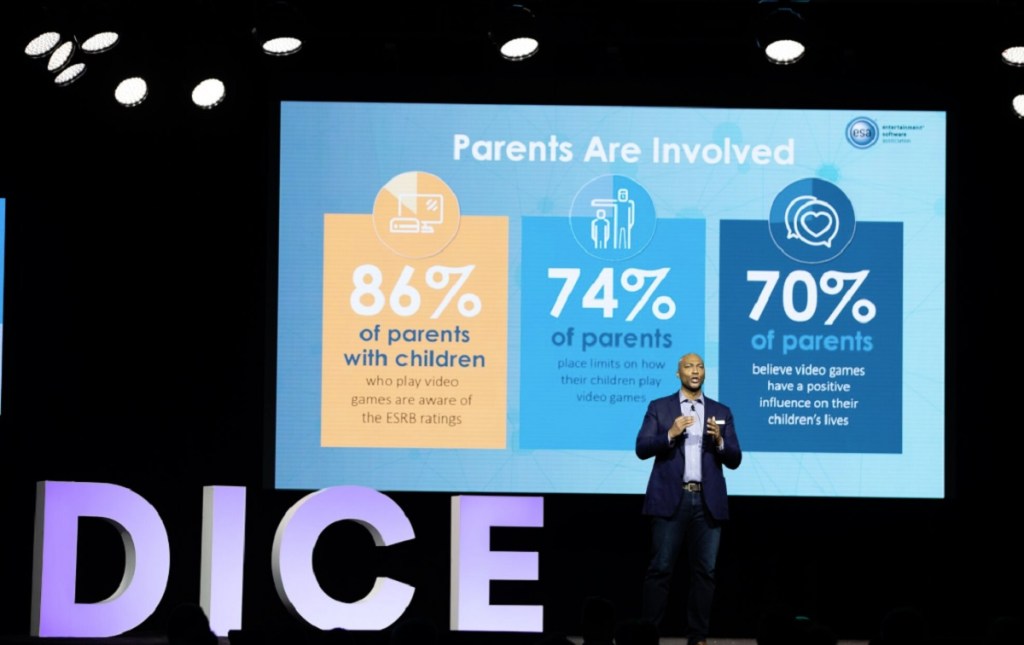 Above: The ESA says parents are aware of video game ratings.

Pierre-Louis: That’s a great setup for the question, because we have this conversation on all levels. One is that we’re careful with our terms because it’s a medical term. It has a very specific meaning. We’re careful not to conflate medical issues with other parts of the conversation.

In terms of screen time generally, that conversation is interesting because it’s not just about video games. It’s about screens in general. It’s important to distinguish healthy screen time and whatever else you want to use to describe the other. More and more, you’re seeing in schools that kids are using Chromebooks and other devices for all their courses. It’s become a mainstay in how kids interact with education today. It’s important to think about, for example, what the UNICEF report talks about. It’s about the quality of the screen time, not the time.

As a parent, you’re empowered by being a parent to manage that. From our perspective, we also provide the tools that we’ve talked about in the speech, about parental controls on the consoles. There are tools in place, as well as just the role you have as a parent in managing your kids’ time.

GamesBeat: It’s still important to oppose the WHO if there’s some faulty science there, if they don’t really have video game experts helping them. What I would prefer not to happen is to have the conversation shut down because everyone is digging in and saying either there is addiction or there’s no addiction. Because we deny that there’s any addiction, we can’t have this conversation that parents have.

Pierre-Louis: Our argument with the WHO has been over the impact of a conclusion based on a lack of medical consensus, which is different from the conversation you’re talking about. But that’s critically important because it impacts the discussion. Is it a symptom? Is it the cause? That gets into a lot of medical issues. As a parent, it’s all about having the tools in place to impose the rules you want to impose on your household.

GamesBeat: What do you see across different governments around the world and how they’re approaching games now? Does anything seem like a better approach to you, or do you worry about the approaches governments are taking? I think in particular about China, which seems sometimes to have their act together, but other times they seem like they don’t know what they’re talking about.

Pierre-Louis: I think different countries just approach regulation differently. The U.S. has a market-based approach. It relies a lot on self-regulation, as well as rules in place where the government — whether it’s state or federal — feels like it needs to step in. Other countries are more regulatory states and they take a different approach to lots of topics, including ratings. What you’re seeing in various states in this discussion are really the governmental approach they have and how that interacts with this discussion. 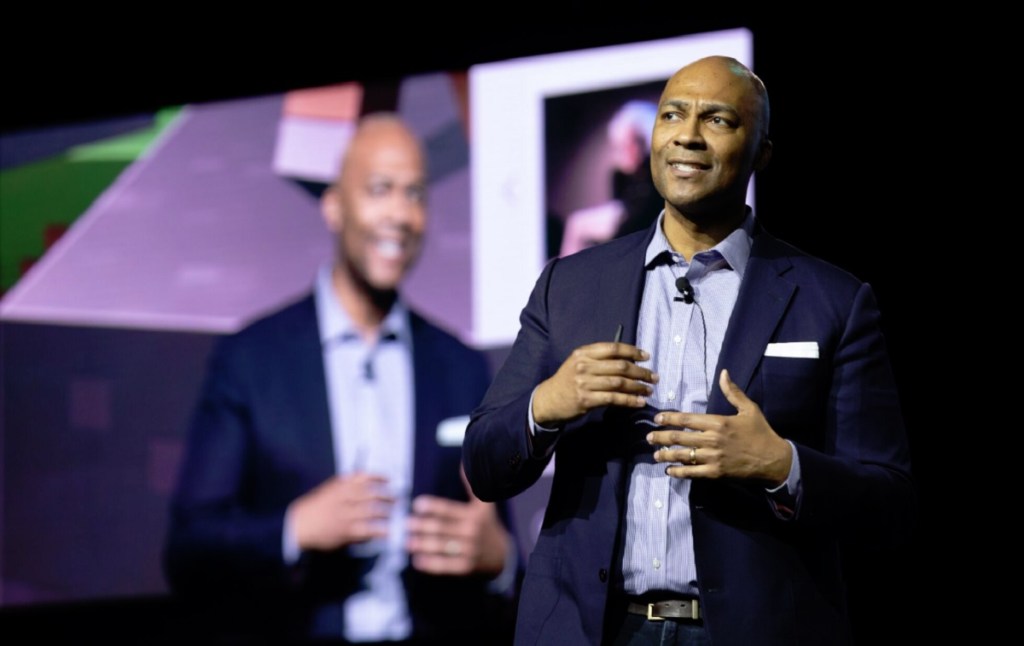 GamesBeat: Even then, the term “addiction” comes back and gains importance. People who trying to regulate loot boxes are saying that it’s like gambling, and gambling can cause addiction, therefore you have to control loot boxes. And yet if you don’t think there’s an addiction problem there’s no need to do that kind of regulation. It’s interesting how it will come up in different ways.

Pierre-Louis: It comes up in lots of ways. What we try to stress, again, is parental controls. That provides an opportunity to not only limit the time you spend in games, but the amount of money you spend. As a parent you’re able to use those tools to manage what content is being accessed by age, what’s being accessed in terms of time, as well as spending.