Just Cause 3 debuted last fall as a kind of Grand Theft Auto for tropical island warfare. It was perhaps the goofiest of shooters, where you play Rico in the open world island nation of Medici. You try to free it from its evil dictator by any means necessary, using an assortment of grappling hooks, parachutes, and wingsuits.

Now Square Enix and Avanlanche Studios have announced a new downloadable content installment that will be out in early June. Just Cause 3: Mech Land Assault features a mech vehicle with a gravity-defying mechanical arm. You can use that arm to pick up other vehicles and soldiers and then toss them. It makes for some great destruction and a lot of laughs.

We saw a preview of the DLC recently, and we were able to interview Tobias Anderson, the producer of the DLC, about how the team came up with the idea.

GamesBeat: How long has this been in the making now?

Tobias Anderson: The original game came out on December 1. The first DLC came out at the beginning of March. Now the second one is due out in early June.

GamesBeat: Where did you get the idea for this, grabbing things and throwing them?

Anderson: Basically from having a very physicalized game, a lot of physics simulation going on, combined with a lot of destruction. To a degree, actually, the inspiration came from watching people play the main game and seeing what they like to mess around with.

We had the idea of a mech in the making, a very advanced vehicle. We developed that as well. But when we combined that with the players’ creativity, we got this one machine. Go anywhere, be very strong, and also have this gravity arm that can pick up things and throw them and all the other crazy stuff.

GamesBeat: It seems to fit well with the sense of humor of the game.

Anderson: Just Cause has always been a bit tongue-in-cheek with everything, from Rico to the enemies. Having him pilot this amazing war machine is another step in the same vein, I’d say. 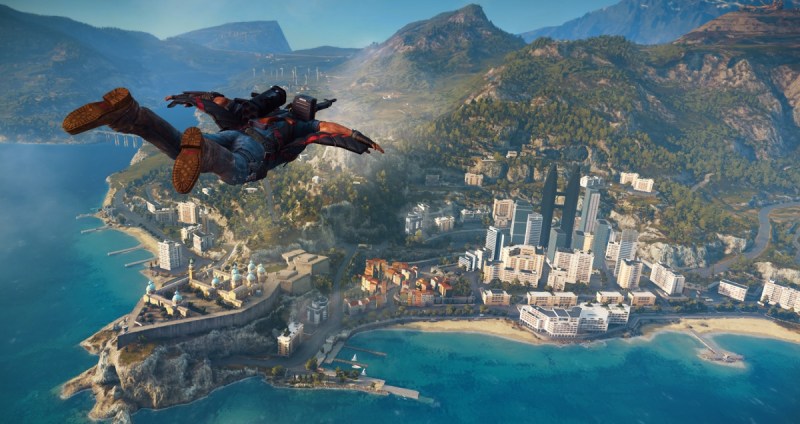 GamesBeat: What can players expect from the rest of this DLC? Are they going to be doing this the whole time?

Anderson: This is more just for you guys to be able to mess around with the mechanics. But the DLC is a storyline that spans three to four hours or so. It has some new enemies, mecha and so on. It’s a proper new experience, especially in this new place. It’s a new part of the world that the players haven’t seen before, a new land mass.

GamesBeat: Are the mecha almost indestructible? It seems like other mecha are the only ones that could damage them.

Anderson: Other mecha can definitely damage them. You’re not invincible.

GamesBeat: Can someone pick you up and throw you?

Anderson: No, they can’t. We experimented with that, but things started to go a little haywire. It was a fun idea, though.

GamesBeat: Is there a sort of rock-paper-scissors thing to the antagonists? It seems pretty indestructible so far.

Anderson: There are plenty of enemies that can hurt you. When you take on the bases—the mech we’re showing you here is pretty upgraded. You’ll have a bit less shielding to start and the enemies are quite powerful. The bases in the DLC are somewhere in the medium to more advanced range if you compare them to the main game. It’s quite difficult to take them all out.

GamesBeat: How do you work up to getting the mecha?

Anderson: There’s a progression path. Everything Rico has – his grapple, his wingsuit, his other skills – has a progression, and the mech has its own progression as well. When you work through the DLC pack, after you’re done with that, you’ll have a fully upgraded mech.

GamesBeat: Have you been able to respond to feedback and things fans have liked in the original game?

Anderson: There are always forum reactions, seeing what players really want. We’ve harvested YouTube, too, looking at all the crazy videos people have posted. One thing some people enjoyed was just picking things up and stacking them on top of each other. We’ve seen some amazing Jenga towers. They also really enjoy throwing objects at each other and creating more destruction that way. All that was inspiration for what we’re doing here. 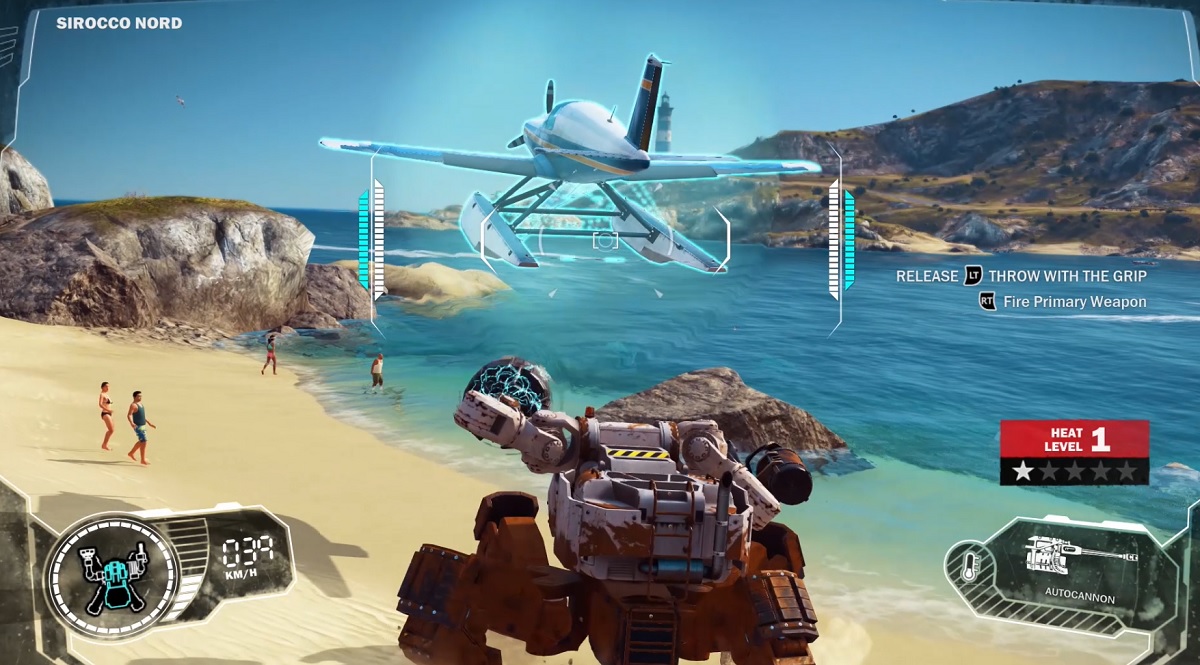 Above: Just Cause 3 DLC’s mech lets you launch a seaplane.