For a long time, Pixonic saw our lack of video ads in War Robots as one of our strengths and advantages. We often received pleasant feedback from our players to support our view, along the lines of “Wow, this game is amazing, and also has no annoying ads … such a rarity these days.” We had so many of these messages that we actually regarded it as a “feature” of sorts.

However, we conducted our own market research, and the results shows that we should have considered implementing rewarded video ads after all. We knew they were successful for some games: The Walking Dead: No Man’s Land, C.A.T.S among many others.

All in all, Unity gave us a very promising revenue forecast for potential integration of rewarded video in War Robots. I’ll jump ahead a little bit and say that we actually exceeded the forecasts of our friends at Unity Ads by two-and-a-half times, and our own evaluations up to four times. The challenge was integrating a brand new monetization model in an already up-and-running IAP-driven in-game economics system.

If you’re somewhat familiar with F2P mobile games economics, you probably know that most players don’t pay — paying users make up about 4 percent at best (but they pay big).

Rewarded video ads are often presented to the player as a way to receive benefits paying players have, without spending real money. This claim is supported by a research conducted by Unity – monetization via video ads is the most preferred way of “paying” for the game for 71 percent of respondents.

Another party interested in video ads is, obviously, the game development studio. From our perspective, integrating video ads could increase the lifetime value of both non-paying users and engaged players who pay regularly, but want to have even more benefits.

So, what happens when the player presses the “Watch ad” button in the game? Basically, they contact the advertising provider with a request for a fitting video. As of now, we’re more interested in different means of paying the app developer for integrating ads. In our industry, it’s usually either “cost per impression” or “cost per click” models. Most advertisers are not very fond of paying per views, so the second model is more common and widespread. There are some exceptions though – for example, there are offline brands looking solely for reach, and projects such as Lineage 2: Revolution that has a quite aggressive marketing strategy.

The game developers are also trying to reward players for watching the ads and show the ads only if the player consents to that. Sometimes forced ads may cause irritation among players. But if the players can choose whether they want to watch the ad or not – and get a reward for that – it creates a positive experience for the player and the ads’ performance will increase.

So it turns out that the game has to reward the players for viewing the ads, compensation per conversion that the developer receives is actually relatively modest. The ad revenue here will be calculated with eCPM. The eCPM rate depends heavily on the country: for example, for such fruitful market as the United States, eCPM is usually higher than $20.

The conclusion is that the economically reasonable price of rewarding the user per impression based on potential revenue should be about $0.02-$0.03. But at the same time, if the reward is insignificant, the player won’t bother to watch an ad, so the main objective is to maintain interest on both sides.

For us, an important aspect of integrating the video ads in the game was not only the actual cost of the reward, but its type as well. Initially, we chose these rewards as means of introducing ads:

The main measure while choosing points of integration in the game was the demand for video ads in different segments of our audience. It was crucial for us to make the video ads perform well both with engaged players and the newcomers. So it meant we had limited time to get the views we needed, as newcomers could leave the game on the next day.

By integrating the video ads to a variety of in-game mechanics we gave our players an opportunity to choose which reward will be most satisfying to them. This way we also ensured that the ads could be interesting for both newcomers and experienced players. We have to note that we had to drastically limit the two times-per-battle reward in the higher-level player segment to avoid major in-game inflation and a poor influence on the in-game economics. 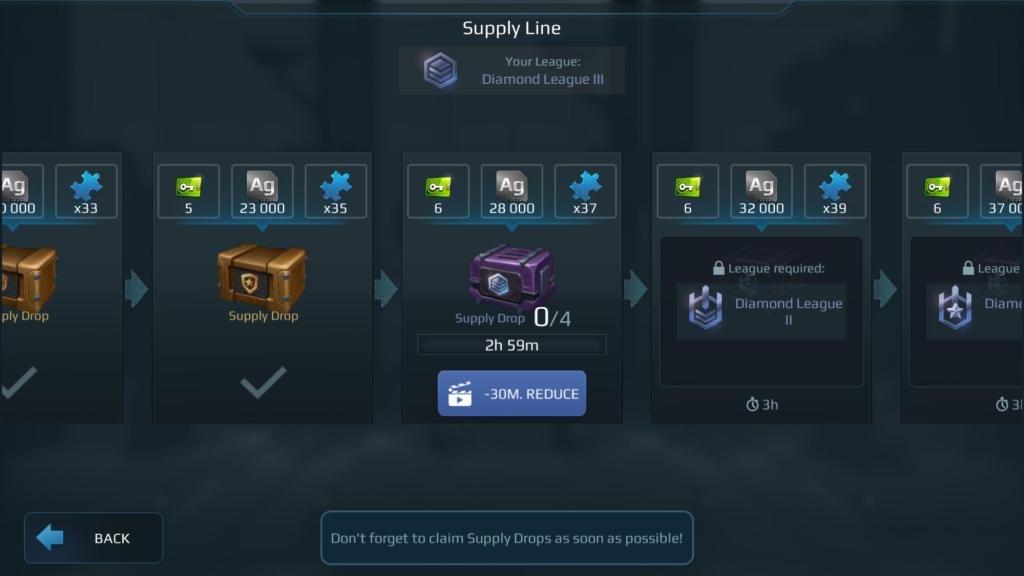 We had also already known that the more videos people watch in a row, the lower the conversion drop, so we had to deal with that as well. It’s obvious that if a user watches ads on ads on ads, they’re probably farming rewards and pay zero attention to what these ads actually offer. That’s the reason most apps limit the number of ad impressions per user. Our solution was to integrate ad views into the game process: if the user hit their upper limit, they have to engage in a battle before watching another one. This way we put the player’s attention back in the game.

We are also introducing new points of ad interactions as we’re introducing new features in the game. For example, after we introduced supply crates, we added a new mechanic that allows you to open the crate faster in exchange for watching an ad.

We don’t plan to ban competitor games and we wouldn’t recommend that to other developers. Unlike most of the developers we don’t ban ads of other games. We are not afraid of showing competitors’ commercials in the game and we don’t see any drawback of that decision (i.e. there is no massive churn after implementing video ads).

It’s already been several months since we introduced video ads in War Robots. The introduction of ads didn’t cause any significant changes in the tutorial funnel completion rate. Also, the majority of War Robots players (as we heard from our research) think of video ads as a great means of receiving benefits the paying players have without actually paying “real money”.

About 50 percent of our DAU on Android and about 40 percent of iOS players choose to watch the video ads. Even without fine-tuning and any major optimization, video ads also had a 6 percent increase to project revenue. We also noticed that the higher the players’ level, the more likely they are to watch ads. The share of ad-watchers on higher levels reaches as much as 70 percent. 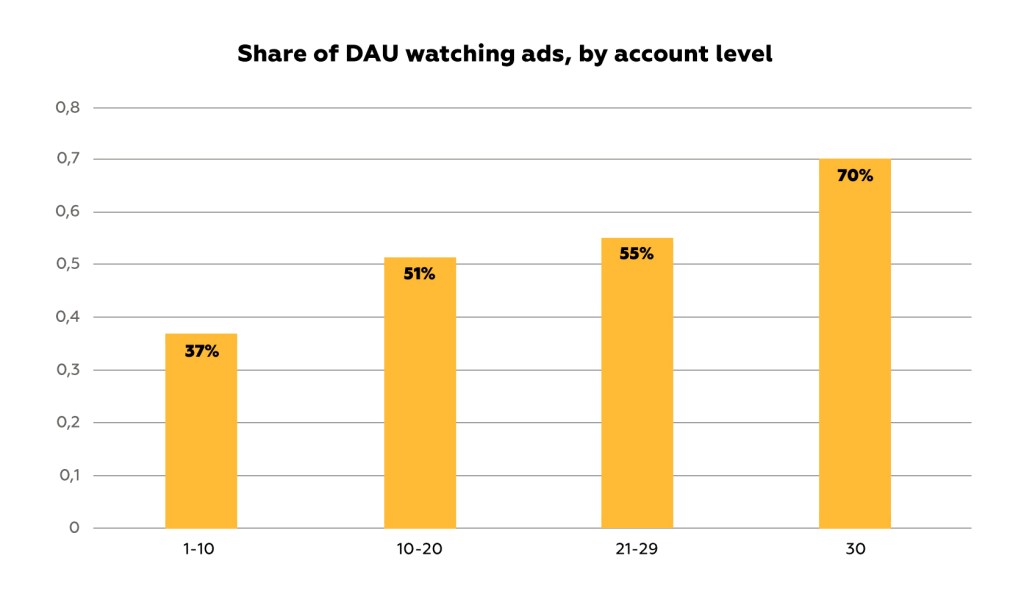 Our paying players are watching the video ads too, even more than non-payers actually. Every day, 66 percent of our paying DAU and 44 percent of non-payers watch at least one rewarded ad, with free supply crates being our most-demanded reward.

The other points of interaction with the ads are on about the same level of popularity, but we have to keep in mind that the frequency of offers to watch ads in the game varies dramatically depending on the reward. Obviously, we can’t offer two-times per battle reward as frequently as we offer faster weapon upgrades, for example, because that could lead to inflation.

If we break down the ad-watchers by level, we’ll see that low-level players are more interested in faster upgrades, because the upgrade time is always the same and at the beginning it reduces the overall upgrade time quite noticeably. The more experienced players prefer to watch ads to open supply crates. 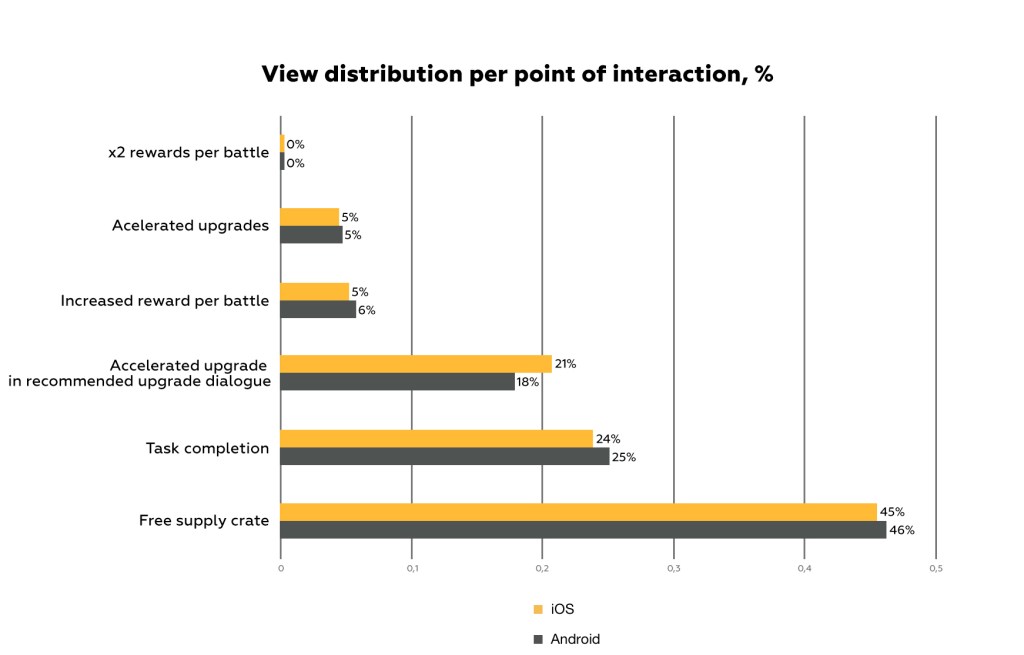 Vladimir Krasilnikov has been the head of game design at Pixonic since 2017.
Vadim Charugin is a senior game designer at Pixonic and is the lead on War Robots.