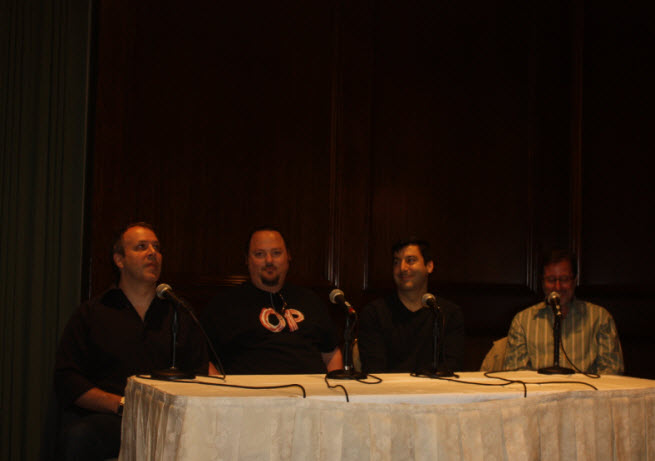 Failing is common in the game industry. So learning from it is pretty important, especially in an era when games are more like never-ending services than finished products.

That was one of the lessons from a panel at the IGDA Summit, which is part of the Casual Connect conference in Seattle. Panel moderator and entrepreneur David Edery, the CEO of social game studio Spry Fox, asked game industry veterans how they’ve dealt with failure and pivoted toward success in their careers. Quite often, pivoting makes sense with free-to-play games, in which feedback from the audience gives you daily analytics on where your game is working and where it isn’t. By addressing shortcomings quickly, you can recover from any initial flaws and turn a game into a success.

“With games as a service, you can have multiple launch points where you can fix things,” Edery said.

Edery said it makes sense to kill a project that isn’t working early and then move on. When a project has big advocates who won’t let go, however, it can be difficult.

“Now we have systems in place to stop products from dragging on if they aren’t working,” Edery said.

One trick is to not let artists into prototyping teams. According to Edery, it becomes harder to kill a project once you create great art for it.

Letting a project drag on is one of the worst things entrepreneurs can do, said Jordan Weisman (pictured far right), creator of game franchises such as Mech Warrior and the CEO of mobile game startup Harebrained Schemes. Knowing when to part ways with key people is important, too.

“Sometimes I try too hard to hold on to talent, and I change everything to suit them,” he said. “It undermines the rest of the culture of the company.”

Mitch Gitelman (pictured far left), the studio manager at Weisman’s company, agreed that it makes sense to cut out people who are negative influences on a project, once you’ve decided to change directions. He saw that firsthand when he trained a lead game designer but later found that person hard to work with as a project fell apart. Gitelman resisted firing the person for a long time because he had such a big personal investment in the designer.

“That was a major mistake,” Gitelman said. “The major takeaway is you have to expunge the team of negative influences. Positive energy expands; negative energy contracts. You have to rip out cancers on your team, regardless of how much it hurts you.”

Jon Mavor (pictured middle left), the chief technology officer of Uber Entertainment and veteran of games such as Supreme Commander, said that new teams have to be flexible in case the initial games they’re working on fail. He has seen a number of teams fall apart because one member of the team was rigidly against changing the initial plans. Flexibility is key.

Working with friends is a touchy subject. When you pivot, you may find your friends or partners disagree with you. Weisman said there was a time about five years ago when Gitelman, who had seen a big failure in his career with a game dubbed Shadowrun for the Xbox 360, was in a bad state.

“He was bitter and angry,” Weisman said.

At that time, Weisman told his friend that he did not want to work with him on a project “at this time.” Gitelman acknowledged he was “hard as a rock” after his failure and needed some time to “soften.” Now Gitelman is working Weisman on Shadowrun Returns, which raised $1.8 million via a Kickstarter crowd-funding project earlier this year.

It didn’t help that the earlier failure was a highly public one for Gitelman. Weisman said that emotionally, it is harder to fail when you are under a big public spotlight because you’ve already have previous successes. That’s why big companies don’t take a lot of risks. If you fail when your team is small and no one is watching you, it often hurts financially. Emotionally, that can be easier to get over.

Weisman has had a lot of ups and downs. Most recently, he launched Smith & Tinker to produce games and toys. But that didn’t work out for Weisman (though it has pivoted since he left), and he shifted to Harebrained Schemes and kids’ game developer GoGo Kiddo.

Once you have a failure, Gitelman says you have to give yourself time to “wallow” and then move on. After that, taking action is the next best move. Then you do a “risk analysis” and start attacking the biggest problems.

When you pivot and become successful, it’s a great feeling, Edery said. But the feeling of success doesn’t last forever. You start worrying about the next problem you have to deal with. When you succeed, it’s important to celebrate that success.

“Any elation I’ve ever had lasts for a matter of hours,” Edery said.