The analytics behind a mobile game’s early performance can give developers a lot of clues about whether the game will ever hit $1 million in revenue, according to a report by mobile monetization firm Tapjoy.

The data should be particularly interesting to mobile-game developers who are deciding how much to invest in promoting an app. It has insights that can be used to predict lifetime value and retention. (VentureBeat’s VB Insight research group also has reports on mobile analytics tools and tools for improving lifetime value of a user, or LTV).

The Mobile Signals Report is a first in a series for Tapjoy, and it is based on data mined from Tapjoy’s own monetization business. The report says there is a strong correlation between the number of players making three or more in-app purchases and the likelihood of the game reaching $1 million in overall revenue. Apps that have 1,000 users who make at least three in-app purchases in the first 84 days have an 84 percent chance of reaching $1 million in total revenue. And apps that have 4,000 users who completed three or more purchases broke $1 million in revenues every time. 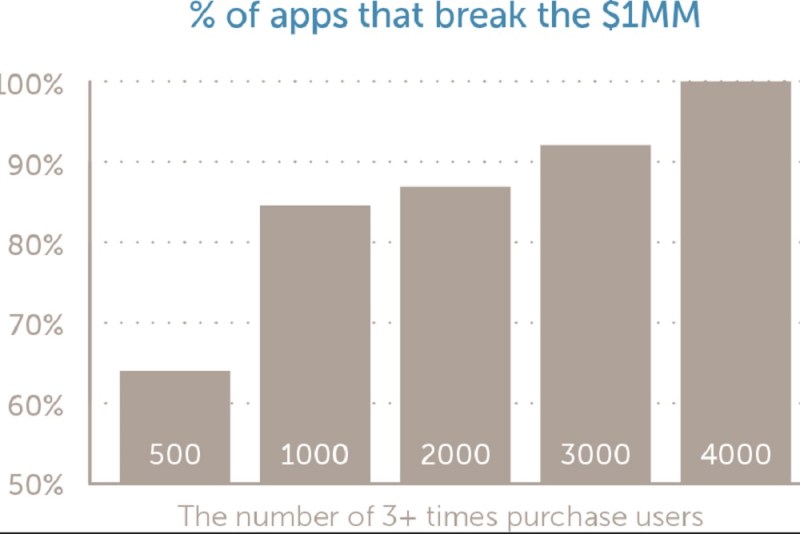 Above: Percentage of apps that break $1M

In addition, if 35 percent of an app’s in-app purchasers go on to make a third purchase, the app is very likely to hit $1 million in total revenue. If the conversion rate from the first-to-third purchase is less than 35 percent, the app will likely fall short of that milestone.

The first day of the month tends to be the biggest in-app purchase spending day, even in Asia, as the first day’s average revenue is more than twice the daily average. In fact, 20 percent of monthly revenue is earned in the first four days of the month. The majority of revenue comes from a few bestselling items. In over 50 percent of mobile games, the best-selling item is sold 20 times more than the worst-selling item.

Need a mobile monetization strategy?
Learn how to drastically increase your mobile revenue.

As for LTV, Tapjoy says it tells us how much revenue customers will generate over the lifetime of an app. It allows app developers and marketers to craft more engaging ad-tailored user experiences. But Tapjoy also says that app developers and marketers have barely scratched the surface of this topic. Tapjoy got access to LTV prediction technology last year with its acquisition of South Korea’s 5Rocks.

“We’re still struggling to connect the dots between short-term gains, user experiences, and long-term monetization outcomes,” the report says. “The missing link is prediction. It’s not enough to know what our audiences have done. We need to know, as early as possible, what our users are likely to do — so that we can target them with the right messaging, products, and offers as early on and possible. The app developers, ad campaign managers, and product owners who can predict LTV and revenue will have the ultimate advantage in winning over their customers faster.” 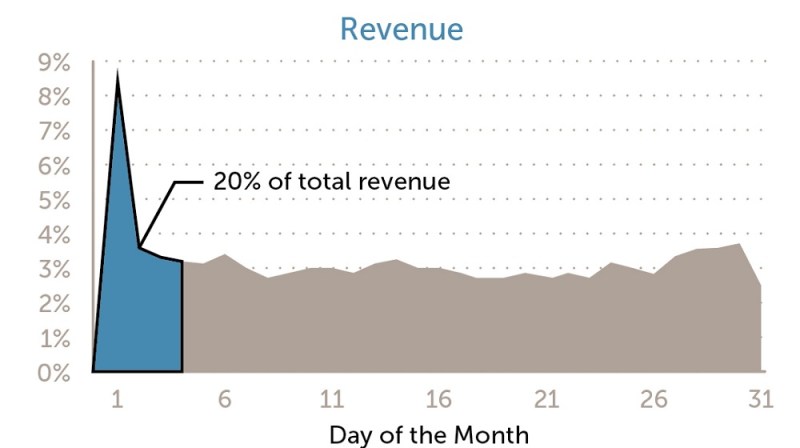 Above: Revenue comes in the early part of a month.

Nielsen, meanwhile, says that the number of apps used by consumers per month grew from 23.2 in 2011 to 26.8 in the fourth quarter of 2014. Competition is increasing. Market researcher eMarketer says that mobile ad spending will rise from $45.85 billion in 2015 to $94.91 billion in 2018. Only the apps with higher LTV will be able to afford the higher advertising costs.

Tapjoy examined user behavior in 479 apps with session counts of more than 149 million users. The company focused on app makers in Korea, Japan, and China.