No doubt you’ve played through a lot of The Last of Us Part II by now and aren’t worried about spoilers. But warning: this story has some spoilers for you, as we try to show you tips on how to survive the toughest boss fight in the game from Naughty Dog.

I played on the Moderate level the first time, and I survived this scene in a place called Ground Zero only after many attempts in my first encounter. I also went back after I was done and played through it on Survivor, the hardest level. But my daughter Danielle also played it on Survivor and she did better than I did. So this video shows her gameplay against this beast, which is an amalgam of multiple Infected beasts, or zombies, in the game. It’s called the Rat King.

It is a terrifying creature, made all more scary by the setup scene where you have flee for your life. When you go into this level, you’re playing Abby, one of the main characters. She has been hunting through the hospital’s lower levels to find medical supplies. She finds them, but then she also awakens this beast.

Before you get to this scene, you have to make sure you are well armed with a lot of weaponry and ammo. You want to have pipe bombs, incendiary shotgun shells, and a flamethrower. You’ll probably have to have full ammo for your shotgun, rifle, hunting pistol, and revolver as well.

In the beginning of this fight, you need to run. You have to make the correct turns or get torn apart. That takes some time. When you get to the actual level, you’ll find it is a confined space. It is shaped like an “S,” with a large well-lit room on one side with a big table in the middle. And on the opposite end of the level, or the other end of the “S,” you’ll find some dark spaces behind a table or a small room with multiple entrances. To survive, you have to run and gun, going back and forth between these two extremes of the level as the beast chases you. 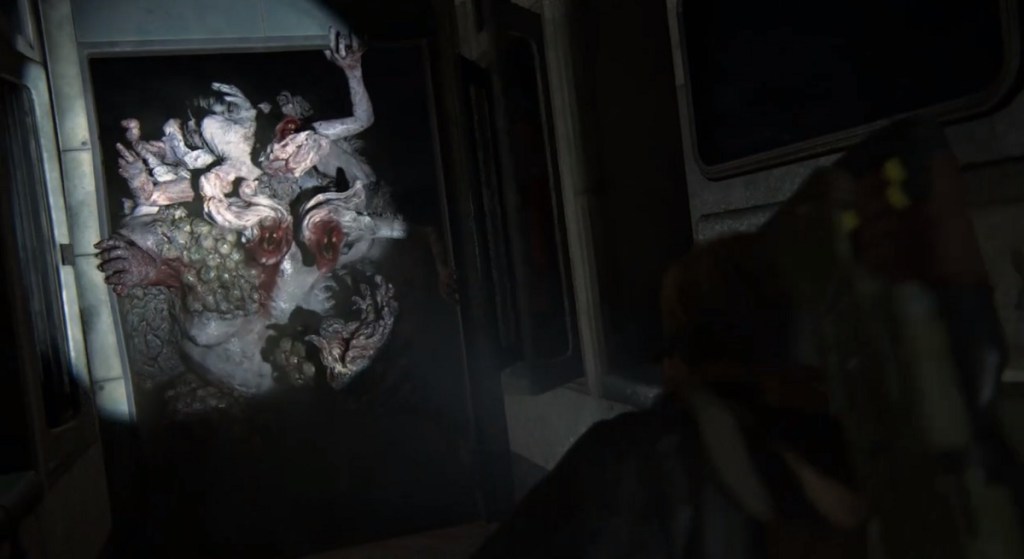 Above: The big and ugly beast in The Last of Us Part II.

At each end of the “S,” you have a breather. You can take a minute to switch weapons, like pulling out the shotgun with the incendiary shells or switching to a pipe bomb. You can use that time to heal or craft more ammo. After you do some damage, the beast splits, and a little brother crawls out of it. This little brother is a full-on threat in any other situation, but for this scene it is the little pipsqueak.

You might make the mistake of trying to take out the little beast first. But I never had any luck with that plan, as the little beast seems destined to survive and give you more grief later.

You can think of this battle as a matter of choreography. You have to think about every chance that you have to attack. It’s easy to miss or to make a mistake and get torn apart. If you try to attack for too long, the slow beast will catch you. You have to remember to position yourself so that you always have an out. It’s that old rule of defensive driving. Don’t get caught with no escape route.

I’ve added some running commentary to the video on how to fight the beast and the beast’s little brother. The bottom line: the flamethrowers is really helpful but should not be wasted. And the pipe bombs and incendiary shotgun shells must also be used with precision. Once you take out the big beast, you can then take care of the little beast with your remaining weapons. But before you pursue the little beast, you should search the whole place for resources, heal, and craft more ammo. Please check out the video.

Here’s our review of The Last of Us Part II and our tips and tricks for playing it.