Twitch had no idea what to expect when their service hit consoles.

That’s according to Matthew DiPietro, the vice president of marketing at the livestream service. I recently sat down with Matthew at Twitch’s San Francisco headquarters to get a sense of how the company felt about its expansion to Sony’s PlayStation 4 and Microsoft’s Xbox One and its success on the console frontier.

Above: Thanks in no small part to the new consoles, Twitch is pulling major traffic across the Internet.

The beginning of Twitch

Before Twitch, we had Justin.tv. The livestreaming site was one of the first major successes in the lifecasting movement. Lifecasting was a brief phenomenon in the early days of the Internet that consisted of simply broadcasting everyday activities from the perspective of the person performing them. College buddies Justin Kan, Emmett Shear, Michael Seibel, and Kyle Vogt attached an amateur camera rig to Kan as an experiment, broadcasting his daily routine to the public. The result became a popular spectacle online. When the team made it possible to broadcast viewer-created content, games were soon the dominant streams.

Gameplay feeds so dominated the Justin.tv charts that the company created an arm to devote to it. During the Electronic Entertainment Expo 2011, at a joint party between Justin.tv and the developers behind the multiplayer online battle arena game Heroes of Newerth, Twitch.tv went live. Roughly 3.2 million viewers and streamers were immediately ported over from Justin.tv. Shortly thereafter, the new company held meetings with two of the major console-makers. Both Microsoft and Sony were knee-deep in research and development for their next generation of hardware. Twitch had the majority of the livestream audience, and this was turning into an opportunity to capitalize on a major potential trend in console gaming.

“From a marketing and PR standpoint, it’s just been fantastic,” DiPietro said. “We’ve had a wonderful relationship from the very beginning. We are in a lucky position; [Microsoft and Sony are] both excited about Twitch. The more people they turn on to broadcasting, the more those broadcasters are evangelists for their platforms. In that sense, Twitch is a discovery mechanism for new consumers.”

The return figures back up the console-makers’ initiative. Twitch’s broadcaster count has approximately doubled with the new console audiences, with both consoles holding around 20 percent of total broadcasters. It’s difficult to determine an exact number per unique console, with some broadcasters owning and operating both units. All told, console broadcasters have helped Twitch break through the 1 million-monthly broadcasters threshold. This is up from approximately 600,000 casters prior to the integration on the new hardware.

“Out of the gate, we’re astonished by the adoption rate in terms of the sheer number of broadcasters that are doing these things from the consoles,” DiPietro said.

Above: The dedicated button for capturing, sharing, or streaming gameplay on the PlayStation 4 controller.

Sony has taken livestream integration to heart, with a Share button on the PS4’s DualShock 4 controller. Sony’s partnership with Twitch has been a core feature of the new console’s design. A push of a button has you logging into your account and broadcasting immediately. But Twitch found that educating players on how to start broadcasting wasn’t as easy.

“Playstation 4 … was a little bit of a softer launch in the sense that it was the first of its kind, never been done before,” DiPietro said. “So telling that story and getting consumers engaged in the product was a little tougher. But it was a huge success.”

The “dead simple, super easy” feature’s growing pains weren’t isolated to just getting the word out. Only a few weeks following the PS4’s launch, reports began to come in about people using software to broadcast themselves having sex on camera. Through Sony’s Playroom, an augmented reality program that primarily uses the system’s camera, certain users took exhibitionist advantage of a live audience. Twitch and Sony were quick to respond.

“It took us a little by surprise, took Sony a little by surprise too if I can say that,” DiPietro said (GamesBeat was unable to reach Sony for a comment on the matter). “… They were a very small — but very visible — group of people who, given the chance, will just do lewd things on the Internet. 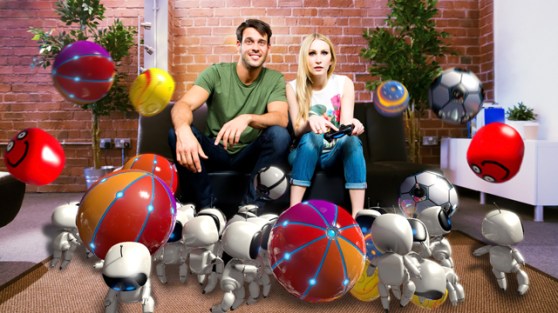 Above: Reports of misuse of Sony’s Playroom AR application came soon after the PS4’s launch.

“We worked with Sony immediately and had the situation rectified within 48 hours,” DiPietro said. “It’s really not an issue anymore, really wasn’t after that week after launch.”

Playroom is also no longer on the Twitch registry. Those wishing to broadcast themselves with the service, no matter what their content, will have to go other livestream outlets. For Twitch, it was just part of the package of being a social media provider of a certain size.

“We certainly learned from it,” DiPietro said. “We work very closely with the moderation and administration teams for both Sony and Microsoft to make sure all of the content is good. It really is just a matter of acknowledging it is a thing. This is a challenge that any broadly distributed social media channel has had to deal with for the past 10 years. We’ll figure it out just like everyone else did.”

Twitch and Xbox One

While PS4 gamers got guaranteed Twitch connectivity at launch, the service didn’t hit the Xbox Live dashboard until several months after the console’s launch. Xbox One broadcasters did make up for the wait, however. 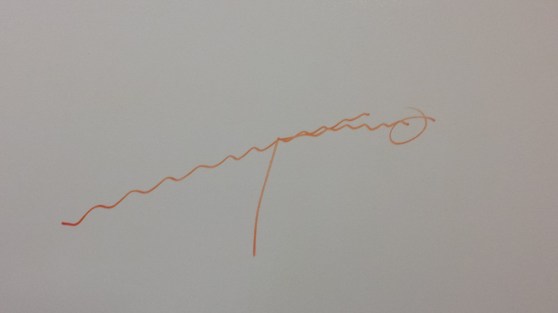 Above: DiPietro sketched this chart to show the sudden rise in Xbox One Twitch adoption. It “may not be to scale.”

“… There was this built up demand for Xbox users,” DiPietro said. “When the application finally launched on Xbox One, it got downloaded like crazy. And you see this massive spike in broadcasters and then a kind of plateau in retained broadcasters.”

Chad Gibson, the group program manager over at Xbox Live, further explains the benefits of the company’s relationship with Twitch.

“Our partnership with Twitch is unparalleled and has allowed us to deliver the best spectating and broadcasting experience on any console with fan-favorite features that are only possible on Xbox One. Xbox One offers the most complete Twitch experience where … you can archive your gameplay from your console, you have the option to see 10 lines of spectators’ comments during a stream, and you can watch any live broadcast and the full Twitch catalog.”

Unlike on the PS4, you broadcast games live on Xbox One through a separate application similar to video services like Netflix or Hulu Plus. The few months it took to bring the application to Xbox One had some to speculate that it was part of a last-minute catch up campaign by Microsoft. DiPietro explains how this isn’t the case. 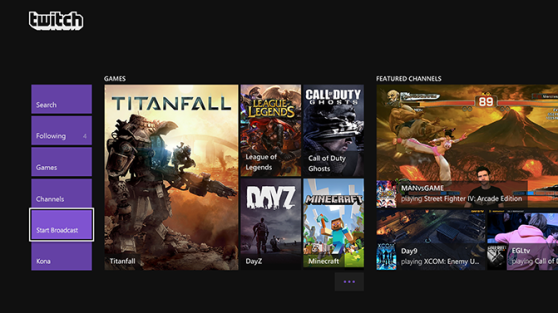 Above: Twitch broadcasts operate through a separate application on the Xbox One.

“It was mostly a product roadmap thing when it came to Microsoft. They … had other priorities. [But] this was a very collaborative development process. It shipped the minute it was ready.”

What Xbox One players got wasn’t just copied from Sony’s machine. The meetings may have started around the same time, but each console-maker had its own idea on how to best utilize Twitch.

“Xbox is a little different. It has some more features,” said DiPietro. “You can move [your] webcam around, you can do other stuff. It’s a more feature-rich tool than the PS4 broadcasting tool.”

Above: Twitch making an appearance at Microsoft’s 2013 E3 press event.

At the time of writing, the top games on each platform break down pretty much along expected lines. Scrolling through the top channels for Xbox One shows an even split between shooters like Titanfall, Call of Duty: Ghosts, and Battlefield 4 collecting thousands of cumulative views nightly, fighting for the spotlight alongside smaller titles like Trials Fusion. PS4 users have the same split of Call of Duty: Ghosts and Battlefield 4, with the indie survival-horror adventure Outlast holding a significant number of Top Channels.