MONTREAL — Ubisoft prides itself on being able to launch big titles in the Assassin’s Creed franchise every year, as well as on its ability to enlist employees from many different studios to collaborate on its big games. And with the launch of this year’s Assassin’s Creed: Syndicate, one of the smaller studios of the giant French game publisher, Ubisoft Quebec City, was put to the test.

Disclosure: The organizers of MIGS 15 paid my way to Montreal. Our coverage remains objective.

Nicolas Rioux, general manager of the studio and an early employee of the sprawling Ubisoft Montreal, started the Quebec City branch from scratch in 2005. Now it has more than 375 people, and for the first time it was the lead studio on the development of a major Assassin’s Creed game. Rioux said he sees the studio’s growth in three phases.

“The first phase was building a team and developing a team that could ship games,” he said. “After that, the second phase was what I call the opportunity phase. We had the chance to develop Prince of Persia and some other specific games for the Wii platform. That experience brought us the opportunity to start collaborating on the Assassin’s Creed brand in 2010. That began the third phase, the road to leadership.” 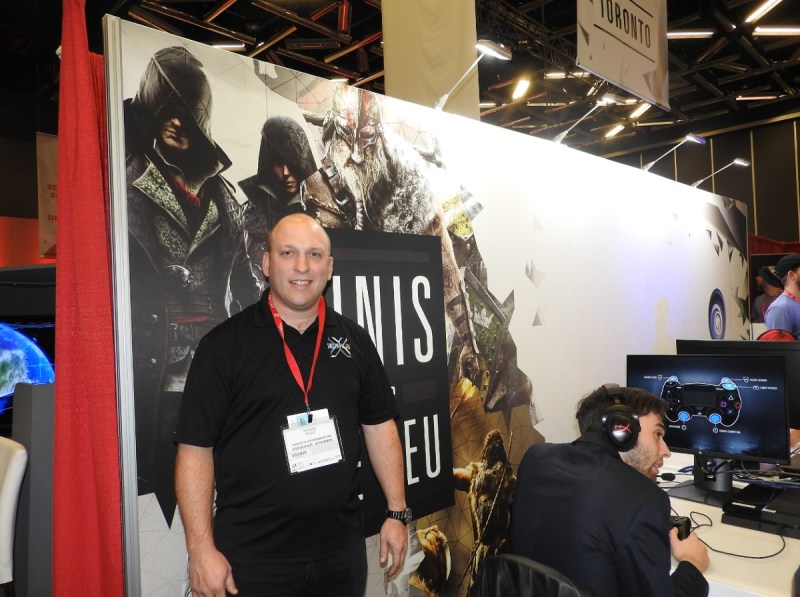 Above: Nicolas Rioux, head of Ubisoft Quebec City, started the studio in 2005.

As Ubisoft Quebec City moved to Assassin’s Creed, it started other studio collaborations.

“We were in charge of DLC like The Tyranny of King Washington, for Assassin’s Creed III, and Freedom Cry, the DLC for Assassin’s Creed: Black Flag,” he said. “Then we had the opportunity to be the lead studio for Assassin’s Creed: Syndicate. That’s what we’ve been doing for the last three years. The game came out on October 23 and we’re getting great reviews. We’ve received a lot of good feedback from players. It’s been good for the team. Now we’re ready for the next phase.” 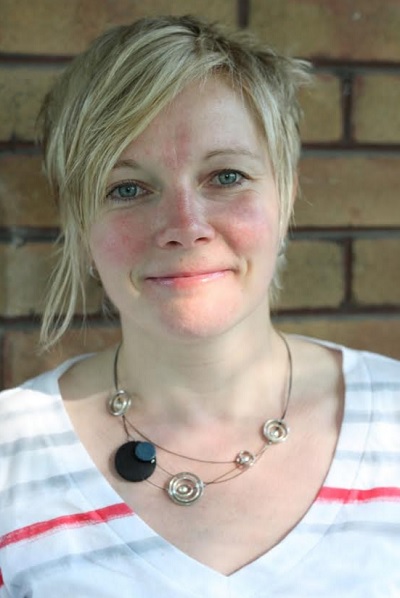 Above: Nathalie Jasmin, a collaboration officer at Ubisoft in Canada.

Nathalie Jasmin, a senior producer and collaboration officer at Ubisoft Montreal, said in an interview with GamesBeat that the collaboration is absolutely essential to getting high-quality versions of Assassin’s Creed out every year.

“It would be very hard to have just one studio make each game,” she said. “When you work with more than one studio, you get a fresh and different perspective. I wouldn’t say the model is perfect, but it pushes the boundaries to create innovation and quality. This is really a strength.”

She said that the collaboration helps studios draw on fresh ideas from the outside. It also allows younger teams to participate in the creation of the most important properties that Ubisoft owns.

Rioux said that it’s easier to make the games jointly because each Assassin’s Creed game is an open world.

“An open world has a lot of systemic elements. If you have a specific part of the open world you want to add to the game, that’s the kind of mandate you can give to a collaborating studio,” Rioux said. “When we were first working on Assassin’s Creed, we were in charge of very specific missions. We were able to work on those tasks without interfering with the main game development.”

But even in an open world, the player can’t feel like they’re playing two different games when they move from one part of the world to another, Jasmin said.

In other words, the collaboration isn’t the result of an all-hands-on-deck emergency where a lot of people are called in late to help a game ship on time.

Of course, there’s a limitation to collaboration on a technical level. Ubisoft studios are allowed to create and use their own game engines, the foundation for a game’s graphics, physical effects, animations, and sound. Whereas Electronic Arts has every studio using the same Frostbite game engine, Ubisoft has a variety of game engines in different studios.

“It’s not a big minus,” Jasmin said. “I wouldn’t say it makes it more complicated because it gives us richness. It allows us to be more edgy. We don’t see our collaborations as one-shot deals. Once our people ramp up on the engine for Assassin’s Creed, then we can really leverage their experience.”

She added, “It’s not free. You really need the right mind set for collaboration. Once you have the right people in place, it’s great.”

Ubisoft declined to comment on whether Assassin’s Creed: Syndicate has turned out better than last year’s Assassin’s Creed: Unity. Syndicate has received better reviews than Unity, with an average aggregated review score of 76 out of 100 on Metacritic for Syndicate compared with 70 for Unity on the PlayStation 4. Early indications are that Syndicate is selling fewer copies than Unity did last year, but there’s still a long holiday season ahead of us. 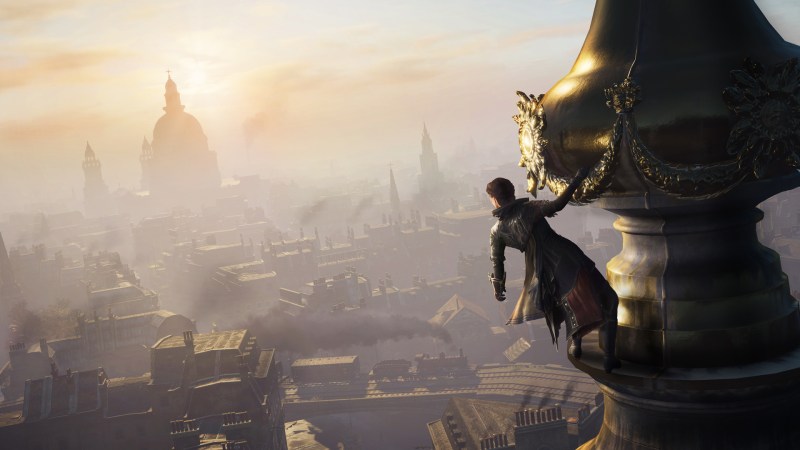 Above: Vistas like this one are everywhere in Assassin’s Creed: Syndicate, and they provide the key to fast travel to that spot later.

Asked what his own studio brought to the franchise, Rioux said, “The focus with Syndicate was bringing modernity into the game. The period of time (London during the Jack the Ripper era) we covered gave us a lot of opportunities to bring new kinds of gameplay and other innovations and a fresh view of the franchise. With this being our first time as the lead studio, the team took a lot of opportunities to innovate.”

Regarding the collaboration across studios, Rioux said, “It’s part of our DNA. I remember, when I started working at Ubisoft in 1997, that it was already in the plan to start working like that. We did some of that collaboration early on. But when we started to work on Assassin’s Creed, which was a truly big project, the collaboration was an opportunity for our studio to grow up, to develop expertise and do more and more. Each new mandate was a bigger challenge for the team. It helped us grow and take on bigger challenges.”

As for the future, Rioux said, “We’re going to continue in the position of being a lead studio in the future. I can’t say too much about our next project at this point, though. We wanted to go step by step. We knew, from the beginning, that the goal was to be the lead studio on a big brand. That’s what we’ve achieved. Our goal was to obtain that mandate and follow through to good reviews and good sales. That’s exactly what we were able to do these last two years.” 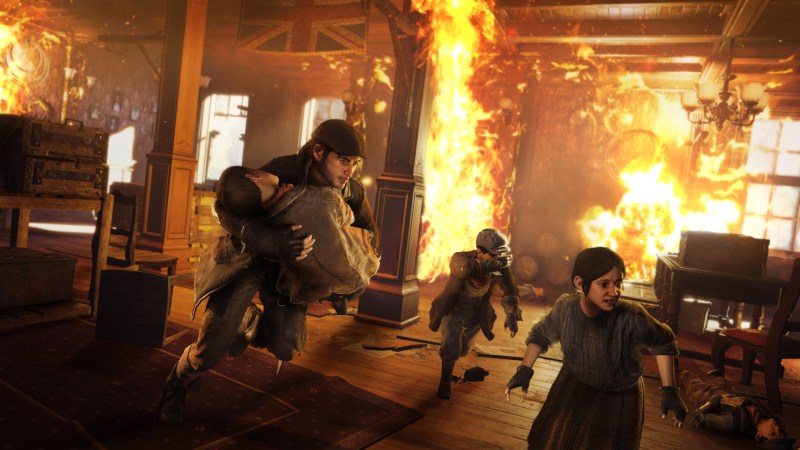 Above: This dramatic scene is part of the storyline for Assassin’s Creed: Syndicate.