When Capt. Stephen Machuga left the U.S. Army, he had a hard time readjusting to civilian life. Trash day, in particular, was hell.

“There’s trash everywhere in Iraq,” Machuga told me over a Skype chat last week. “On the sides of the roads, piles and piles of trash everywhere. It’s a popular place for insurgents to bury wired IEDs [improvised explosive devices].” So whenever Machuga saw trash at the side of the street back home, an alarm in his brain would go nuts, telling him to watch out. He knew it was irrational, but this awareness didn’t help.

It took a video game to help Machuga cope with being back in the United States. Just three weeks after he left the army, World of Warcraft released, and Machuga dived deep — a little too deep, it later turned out — into its multiplayer fantasy world.

Ten years on, and Machuga’s now using the power of video games to help soldiers and war veterans. His charity, Operation Supply Drop, sends gaming packages to troops on the front lines, those recovering in military hospitals, and the guys who the military machine has spat back into a world that has moved on without them.

And with 22 United States veterans committing suicide every day, Operation Supply Drop’s work with vets — helping them to cope with civilian life and form self-supporting communities — is quickly becoming its most important role.

Machuga was always into video games. “Whether I’ve been working in McDonald’s or sitting in the middle of Baghdad on my birthday … whenever I’d get done, gaming would be there.”

He took his Nintendo DS with him to Iraq and played it during the lengthy downtime that active troops have every evening — time when there’s often not much more than an old Ping-Pong table around to distract you from reality.

Machuga’s first gaming supply drop was actually for himself. He nearly died in a mortar strike, and the next day, he jumped online and ordered a beast of a gaming laptop. “Might as well, you know,” he said. “Gotta live for the moment.

“That just changed my experience over there. The last six months of my tour went really quickly after that.” 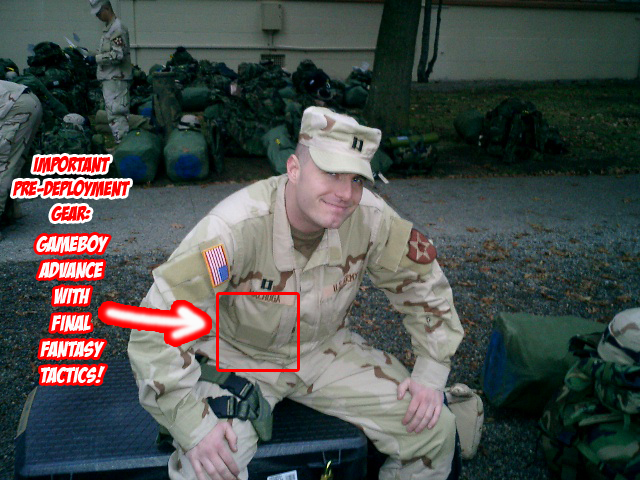 Above: Games have always been a big part of Machuga’s life.

A whole lot of DJ Hero

A few years back into civilian life — and after a lot of time “floundering” — Machuga heard from his old driver, Jeff, who’d been posted to Afghanistan. Jeff knew that Machuga had started writing for a website called Sarcastic Gamer, the site that went on to spawn the gaming charity Extra Life.

“He reached out and said, ‘Hey, do you think you can get my guys and I some video games; we’ve nothing to do over here.’”

Machuga flicked through his Rolodex and reached out to see if any gaming companies would help. He got a response from Dan Amrich, then the community manager at Activision, who sent him out a ton of Guitar Hero and DJ Hero kits.

Machuga managed to ship some of these to Afghanistan, and they were a huge hit. “Jeff sent back pictures of them having DJ Hero competitions using a briefing projector on the side of a trailer,” said Machuga.

It made him realize that game companies do have stuff lying around that they’re happy to give to the troops, and Operation Supply Drop was born.

“Dan’s initial donation definitely gave me the courage to ask other developers and publishers,” said Machuga. “It took a little bit of movement. I didn’t always hear back, but there were definitely developers who came forward and went, “We love this, we want to get involved, we want to help the troops.’”

The donation that started it all

I reached out to Dan Amrich, now the community developer at Ubisoft, and asked why he’d responded so generously to Machuga’s initial request all those years ago.

“When Stephen approached me, it was with a very personal, direct introduction,” said Amrich. “When he told me what he was trying to achieve, I simply put myself in the position of the soldiers on the frontlines. It’s something I can’t imagine going through. I’ve never served in the military; my grandfather served in World War I, and I never met him. I get upset being away from my wife for a weekend, so the reality of being miles from everything and everyone familiar for years is something I can barely fathom.

“Hearing that the games would go directly to the troops stationed in hot zones made a big impression on me. Giving people an experience fundamentally meant more to me than just donating a raffle prize. I hoped having a Guitar Hero night might give them a little of that comfort of home and a little distraction from their reality. If I were in their place, I would truly miss the simple escapism of playing games after a hard day at work — and I couldn’t imagine a harder day at work than being in a combat zone.” 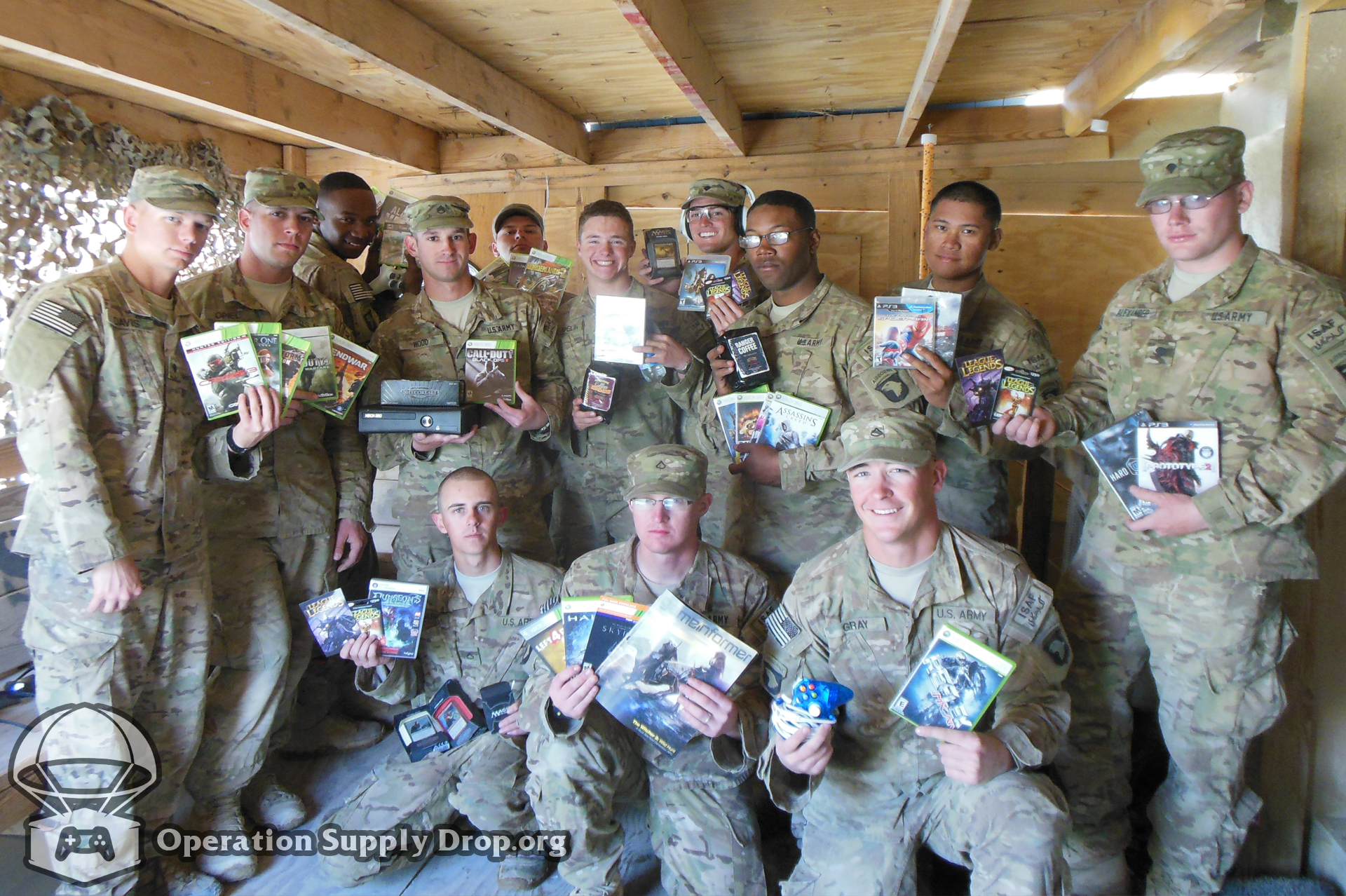 Above: Operation Supply Drop’s packages have always relied on the benevolence of game companies.

Amrich pointed out that Maryanne Lataif, Activision’s senior vice president of corporate communications for nearly 20 years — and Amrich’s boss at the time — was immediately on board with the idea as well. “It was one of those one-minute conversations,” he said. “Like, ‘Hey, there’s this charity,’ and by the time I relayed the basics, she said ‘Absolutely.’”

The photos of the gear in action — including the briefing projector gaming session — just cemented the relationship between Activision and OSD.

“I don’t think I deserve as much credit as Stephen often offers me,” said Amrich. “But I’m honored to have helped. He’s doing the work — I was just the guy with a few extra plastic guitars.”

The need for help

Fast forward to 2015, and Operation Supply Drop has grown way beyond Machuga’s basement. It gets support from charity game streamers on sites like Twitch and has a bunch of partner companies that regularly contribute gaming gear. The standard supply drop package now includes a Gaems portable screen — tough enough to play out of the back of a Humvee — with a PlayStation 4 or Xbox One, a couple of controllers, a gaming headset, and a bunch of games.

I asked Machuga if the active troops he’s sending these drops to could get hold of this stuff themselves, and he explained a bit about the economy of being on the frontline.

“Your enlisted guys, as much as combat pay and tax exemption works in their favor, they’re not making a whole mess of money. Us sending like $3,000 or $4,000 worth of gear to them, that is a deployment-changing event, not just for one dude but an entire platoon or company.

“They can do it on their own, but Private Snuffy should not be spending that kind of money on stuff like that. He should be putting it away or figuring out the future.” 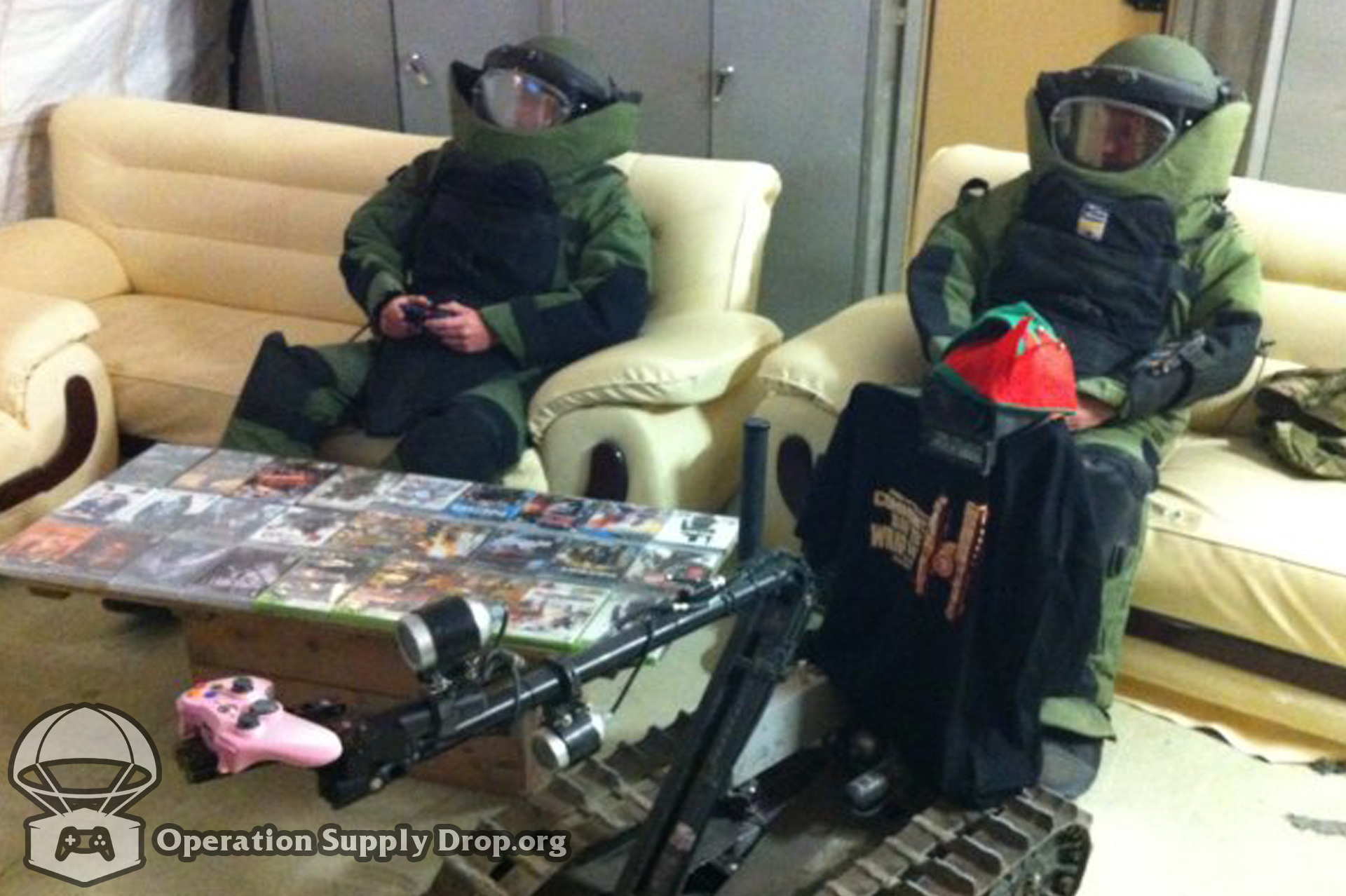 Above: Operation Supply Drop has helped troops take their minds off the reality of their day-to-day lives.

And the troops who’ve already made it home need Machuga’s help even more.

Every day, 22 U.S. war veterans commit suicide. Researchers say that the experiences that troops live through while on duty and when coming home are what heighten their risk of suicide.

“I was in light combat at best, and I still had problems,” said Machuga. “The guys who are kicking doors and pulling triggers every single day for 360 days … I can’t even imagine what it’s like coming from that environment. It is definitely a problem.”

Looking for a comparison, Machuga likened active service with going to prison.

“You are just locked away from the rest of the world,” he said. “The world moves on without you, and when you get out you have this series of experiences — possibly violent experiences — that you can’t really describe to anyone other than someone who has been in prison. Everybody else is just going to Starbucks and living their lives. You get released into that.

“It just hurts your brain,” said Machuga, struggling to put the depth of the experience into words.

Games that Operation Supply Drop provides give veterans something to focus on other than their memories of war and their difficulties readjusting to the everyday. And Machuga is now using OSD to bring young veterans together in a social program called Teams — an alternative to the Veterans of Foreign Wars for a generation that relates more to Halo than to bingo.