While Sony spent Saturday and Sunday partying with fans in Las Vegas, Nintendo found a way to ensure gamers couldn’t stop talking about one of its biggest franchises.

Last weekend was a busy one for gaming. Television producer and host Geoff Keighley debuted The Game Awards, and Sony kicked off its first ever PlayStation Experience fan event. The award ceremony happened Friday night, and it drew a respectable in-person crowd to the Axis Theater at the Planet Hollywood Hotel and Casino in downtown Las Vegas, but its online audience was massive. And Nintendo was one of the companies that benefited most from that audience thanks to the publisher debuting some new footage of the next The Legend of Zelda game in action for the Wii U, which helped the game capture a ton of buzz on social media.

Keighley confirmed yesterday that the show drew nearly 2 million live viewers on Twitch, YouTube, and through the Xbox, PlayStation, and Wii U consoles. That represents a 75 percent growth in the online audience compared to last year’s VGX awards, which media conglomerate Viacom produced for its cable channel Spike and streamed online.

The huge number of viewers made the night a big one for the companies that showed up with new games and new footage from previously announcements. Nintendo helped close out the show with a segment that had Zelda creator Shigeru Miyamoto and producer Eiji Aonuma demonstrating some of the horse-riding and combat elements of Zelda Wii U. This is video that the publisher may have normally saved for the Electronic Entertainment Expo tradeshow that typically takes place in June or for one of the company’s streaming Nintendo Direct video shows.

With 2 million people tuning in live, and hundreds of thousands more catching clips on YouTube after the event, Nintendo had a bigger audience than it normally draws. The company’s E3 video presentation only has 1.7 million views on YouTube.

But it’s not just the size of the audience — it was the timing.

Sony was primed to dominate the weekend with game debuts and new videos premiering at both The Game Awards and PlayStation Experience, but gamers didn’t forget about Nintendo just because Sony had such a major event.

Read all of GamesBeat’s coverage of the PlayStation Experience right here.

On the social-media network Twitter, Zelda actually peaked at around 39,000 tweets on Friday while “PSX” or “PlayStation Experience” topped out at around 35,000, according to social-tracking website Topsy.

Above: A look at social-media trends over the last several days.

If you include hashtags, however, things look quite a bit different. PlayStation Experience and PSX are far more discussed on Twitter when you include those. 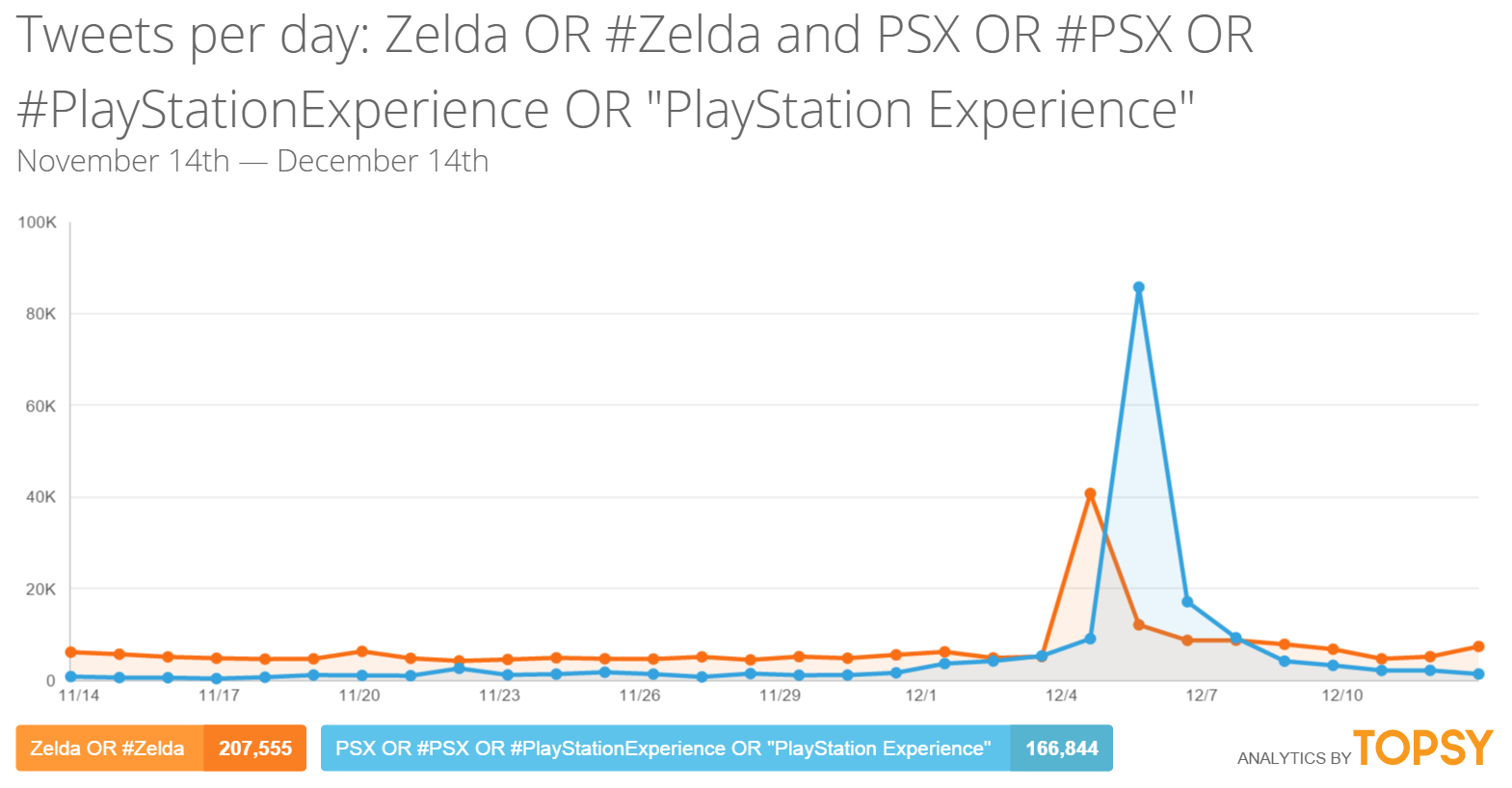 Above: When you add hashtags, PSX definitely takes off. But that’s probably because Sony had an official hashtag for its event.

But this is a bit of an unfair comparison. Sony was using “#PlayStationExperience” as the official hashtag of the event. That means millions of people saw and used it as well. Nintendo did not provide an official Zelda hashtag for people to discuss the latest gameplay video, so this makes this comparison less of a one-to-one comparison.

Above: When you use a more fair comparison, you can see why Nintendo’s bet on the award show worked.

Instead, it makes more sense to compare Zelda and Uncharted using only one word and both in their hashtag and non-hashtag forms. The result has Zelda slightly beating Uncharted, which was one of the biggest game demonstrations during all of the PlayStation Experience.

Wedbush Securities analyst Michael Pachter points out that Nintendo of America president Reggie Fils-Aime was wise to embrace the awards, and that other companies that sat out (like Microsoft) missed out.

“Microsoft made a mistake skipping The Game Awards altogether,” said Pachter. “The awards show was an opportunity to steal a little thunder from PSX, and Nintendo and Reggie seized the opportunity. Thanks for giving me the opportunity to compliment Reggie, as I haven’t had many chances to say what a good job he has done in an otherwise dismal year. Nintendo really stood out with that Zelda announcement.”

Sony has not shared the specific attendance or online viewership numbers for PlayStation Experience yet, but the company did declare the event a success. Sony executives have said that they have received so much positive feedback that they are already planning to do another PSX in 2015. But the show wasn’t without its hiccups.

On Saturday, Sony held its keynote event where it made several big announcements, but the company’s biggest reveal — that Street Fighter V would come out on PC and PlayStation 4 and not Xbox One — was leaked earlier in the week. Sony and publisher Square Enix also announced that Final Fantasy VII is coming to the PS4, but fans quickly grew frustrated with this reveal when they found out it was just a port of the PC version and not a full remake with improved graphics and voice acting.

So while Sony dealt with the highs and lows of running its own event, Nintendo happily capitalized on making the biggest splash during one of the year’s most watched gaming events.