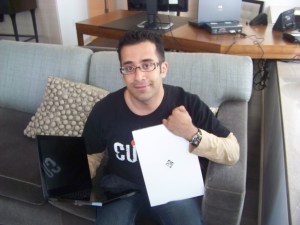 Hewlett-Packard’s VoodooPC division will launch a new Voodoo Envy 133 laptop computer for luxury consumers. And the design looks like it will go head to head with Apple’s MacBook Air.

The Envy also has a large 13.3-inch screen and has no built-in DVD drive; Apple made similar design choices. But the ultramobile machine is lightweight — made out of carbon fiber — compared to the anodized aluminum of the MacBook Air. It also has a multi-touch touchpad, just as the Apple machine does.

The HP machine is more expensive at $2,099 versus the MacBook Air at $1,800. But the Envy has additional features that the Apple notebook doesn’t, such as an HDMI port, two USB ports, an express card slot, and a removable battery. In one interesting twist, Voodoo’s designers put the Ethernet jack into the power brick of the Envy. These are the sorts of touches that could make the Voodoo brand akin to Ferrari or Mercedes. And that’s very important for HP has it tries to claw its way to higher average selling prices and escape a commodity price war with the likes of Dell and Lenovo.

The machine also has a quick-boot system dubbed Voodoo InstantOn. Using the DeviceVM software, the notebook can boot to a Linux screen within seconds. As Windows Vista loads in the background, the user can immediately begin using the Firefox browser, Skype, instant messenger software, a photo viewer or a music player. Getting to those functions fast will make computing far more convenient for mobile users. 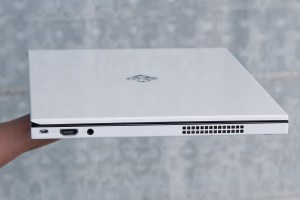 HP bought Calgary, Canada,-based Voodoo in the fall of 2006 because Voodoo had a powerful brand with enthusiasts gamers. Then HP launched its HP Blackbird 02 with Voodoo DNA gaming computer in September. The machine sold well and won 11 editor’s choice awards. Now Voodoo has added capacity, much the same way that Lamborghini started selling more sports cars when Audi bought it. Sood said that the company is working on a successor to the Blackbird.

That design isn’t ready yet, but HP will soon be selling a new version of the Voodoo Omen desktop, ranging from $6,500 to $20,000. The desktop will offer options such as a wood-grained finish, carbon fiber case, or a glass case. It will also have an LCD screen built into the front of the computer for QuickLook data. The liquid-cooled machine will be available at first only to current Voodoo customers. As production ramps, the Omen will be more widely available.

It remains to be seen how successful HP will be with the Voodoo brand. Voodoo competes with Dell’s XPS and Alienware brands, as well as with gamer-focused computer makers such as Falcon Northwest and Velocity Micro. Voodoo has traditionally focused on the highest-end market, but it is extending that brand beyond gamers to luxury users and, eventually, the mass market.

For a picture of Sood slicing a cake with a MacBook Air, check out this link. And check out the hint that Sood dropped at the end of his blog post: about how he wouldn’t need that MacBook Air for long.