Announced in January as a high-tech way to free HTC’s Vive and Vive Pro virtual reality headsets from their tethering wires, the Vive Wireless Adapter now has a confirmed key spec and release window: It will deliver between two to three hours of wireless playtime, and hit stores in late summer 2018.

The Adapter uniquely uses a relatively new wireless standard called WiGig to transmit high-bandwidth audio and video data at 60GHz, well above the frequencies used by common home routers and upcoming 5G cellular devices. As RoadtoVR reports, a sample version of the Adapter is on display at E3 in Los Angeles this week, and ideally works within six meters (19.69 feet) of the transmitter. Notably, the original Vive works in 15-foot by 15-foot spaces; the Vive Pro supports up to 20-foot by 20-foot tracking. Up to three Adapters can be used in the same space, though each apparently requires its own transmitter. 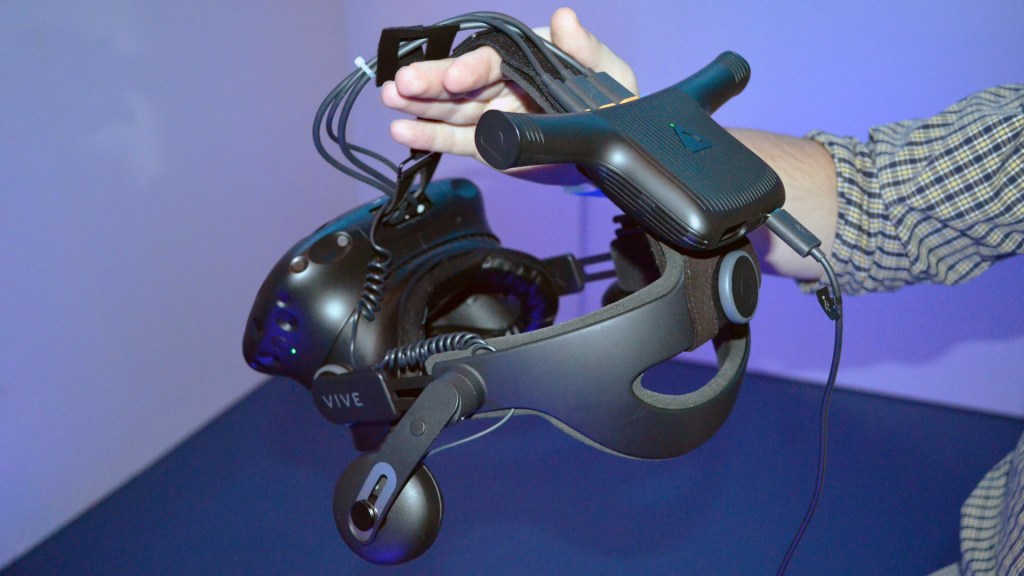 Above: HTC’s Vive Wireless Adapter mounted on the original Vive.

The T-shaped Adapter mounts on top of the Vive’s strap and sits on top of the user’s head, with antennas sticking out of the left and right sides of a wide box. A cable dangles from the back to connect to a USB battery, enabling the wearer to receive ultra-frequent, computer-generated video and audio data updates without being physically connected to the machine. While RoadtoVR noted some latency in a January test of the Adapter, HTC claimed that it was due to demo conditions rather than the accessory.

There’s good and bad news on the tetherless adapter’s features and pricing. On a positive note, HTC is using a 10,050mAh QuickCharge 3.0 battery pack for power, enabling users to easily swap $80 cells for additional wireless power. Less positively, HTC appears to be targeting the Adapter at commercial users rather than consumers, so the price is expected to fall in the $300+ range like the TPCast Business Edition Adapter released in March, which offers up to five hours of battery life. We’ll have to see whether HTC’s version lives up to the premium performance expectations of such a pricey accessory when it becomes available.