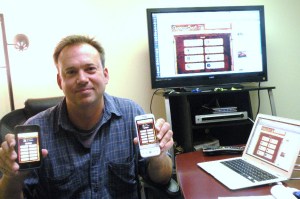 Moblyng was ahead of its time in making cross-platform HTML5 games for mobile devices. Too far ahead, it seems, as the company has shut down, VentureBeat has learned.

Just a year ago, the company said in a filing it had raised about $7.5 million of a $10.9 million round, but it was simply a follow-on funding to its previous round. Stewart Putney (pictured right), believed that HTML5 games were going to become predominant on mobile devices in the future. The benefit was that developers could create games once and have them run on a wide variety of devices as well as on social networks and the web. For users, such games meant that they could play a game on one device and challenge another player playing the same game on another platform.

But Putney confirmed in an email that the company has shut down and the staff of 20 employees has been laid off.

“We did not monetize enough to stay in business,” said Putney.

Redwood City, Calif.-based Moblyng was founded as FlipTrack in 2007, porting Flash slide shows to mobile operating systems. But it changed its plan to help developers quickly port their mobile games to other operating systems. Then it focused on making HTML5 games on social networking sites and mobile devices.

HTML5 is seen as a large competitor for Flash, which most casual games are built on. Most websites that host videos also use Flash to play them. But Flash is lacking on some mobile devices — most notably the iPhone and iPad — while HTML5 is available in most mobile browsers.

HTML5 is viewed as the lingua franca of the web, a protocol for creating software that can run on web sites, mobile phones, and social networks. But in games, HTML5 has had mixed results, since many games in HTML5 run slow.

Moblyng had alliances with Playdom and Lolapps, but it had more success creating its own games that could run in a cross-platform manner, where a player could log into a game on Facebook and play against someone on a mobile phone or the web. The company’s site says it has more than 10 million downloads.

Putney said the games have gotten traction, but too late. The company launched its HTML5 games on the Facebook HTML5 mobile platform in mid-October, but the audience started growing in December when time and cash had run out.

“I am very proud of the work we did, the HTML5 games are still live and we have a growing base of active users,” Putney said. “I remain very confident HTML5 will be a great platform for social games and media, it is simply a question of when. We just unleashed a group of kick-ass HTML5-focused professionals into the market, so my hope is they will help the HTML5 ecosystem develop that much faster.”

Moblyng’s investors include Mohr Davidow Ventures and Deep Fork Capital. The company also received another $500,000 from unnamed angels. A variety of other HTML5 game makers out there, such as Game Closure and Sibblingz, which have also created tools for building cross-platform HTML5 games.