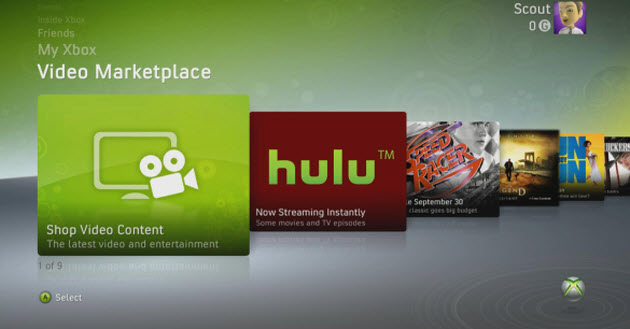 Hulu Plus will let users watch movies, TV shows and other videos for a subscription fee of $9.99 a month.

Hulu Plus joins other non-game entertainment offerings on Xbox Live, including Netflix, Last.fm, and Zune video. Come November, the Xbox 360 will also deliver 3,500 live sporting events from ESPN3.com. Hulu Plus will take advantage of the social connectivity among the 25 million members of Xbox Live, as well as Microsoft’s upcoming Kinect for Xbox 360, the motion-sensing system that will let you control your video playback by waving your hands in the air or using voice commands. Microsoft calls this “controller free navigation.” You can also join your friends in movie-watching parties.

Hulu Plus fits in with Microsoft’s oft-mentioned Trojan Horse strategy. The game fan brings the console into the home to play games, but services on top of the console open it up to the rest of the members of the family, and the console becomes a gateway to all sorts of lucrative internet services. That’s the theory, anyway, and both Microsoft and Sony are pursuing it.

More details will be announced later.