HypeHype, formerly known as Frogmind, has launched a mobile app to enable everyone to create, remix, and play games with their smartphones.

And the Helsinki, Finland-based company has raised $15.5 million from Supercell to further develop HypeHype. The HypeHype app is available in early access, with the hope of making game development a “hundred times bigger with 100 times faster creation time.”

HypeHype is a new platform for creating, remixing, and playing user-generated games with a phone, tablet or desktop. HypeHype app offers features and tools for making modern games and takes game creation from months of complex PC development to just hours of visual editing on the go.

Johannes Vuorinen said in an interview with GamesBeat that HypeHype’s new editor is accessible on mobile and optimized for touch-screens. Creators don’t need to understand traditional game programming. The company thinks of the 2.9 billion gamers in the world as potential creators, but no more than 20 million are actually working on games. 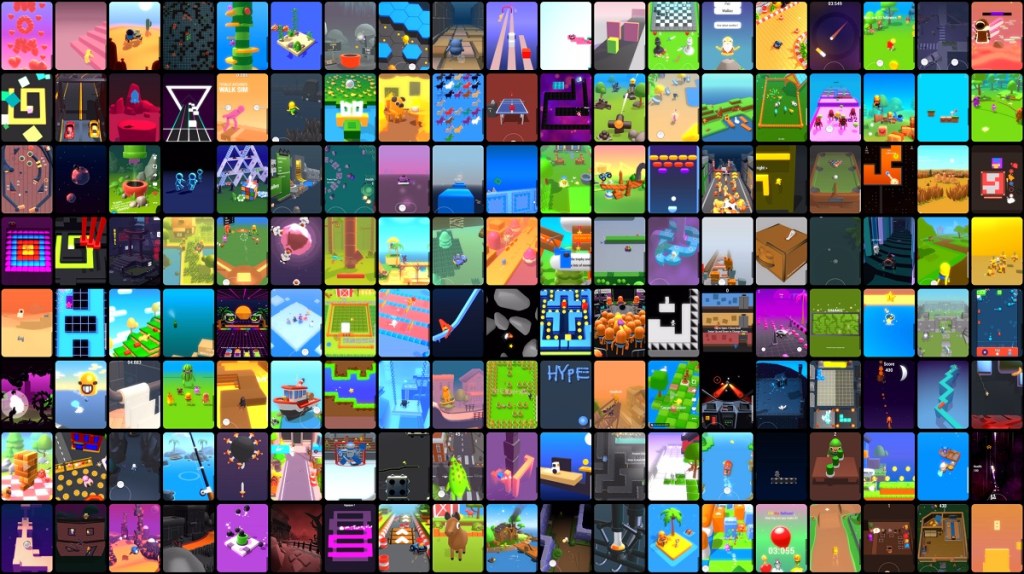 (I met Vuorinen years ago at an event in Marseilles, France. We shared a laugh about a tiny stray dog running through the airport and pooping on the rug. Vuorinen went to clean it up.)

Jarno Kallunki-Mättö, marketing lead at HypeHype, said in an interview that the company started on this new journey a couple of years ago with a focus on the notion that everybody has a mobile phone.

“With that mobile phone, you’re able to do pretty much everything: editing and posting videos and pictures in social and dating and investing and banking and whatever,” Kallunki-Mättö said. “We see in the market that the short-form content has taken over rapidly, via content creation, with videos like on TikTok and game videos.”

He added, “But we have been looking at this from the creator side and looked at why you can’t make games using your phone. That’s how HypeHype started. We all know that making games is pretty hard.  This is true not only for the bigger studios but also the indie developers.”

Vuorinen noted that hypercasual games have become popular and publishers have taken the work of small devs and published them on the app stores. But that still takes a lot of time and effort. Still, it’s hard to find the right games to play because so many of them are out there.

You don’t really want to find one of the many copycat games either.

“The stores are full of hypercasual games that are copies of each other,” Vuorinen said. “That’s not the kind of user-generated content you want.”

“We believe HypeHype can bring game-making to billions of people and unleash their creativity to create even AAA games. Creators will be able to collaborate together, and eventually earn money from their games” said Teemu Mäki-Patola, chief operating officer of HypeHype, in a statement.

HypeHype games run on HTML5 and can be played instantly on the app or any device with a web browser. The platform will also support real-time collaborative editing by multiple creators, as well as making online multiplayer games in the future.

In addition to games, with HypeHype creators can make interactive entertainment, memes and animations as well.

“It is finally time to fully democratize video game making,” Vuorinen said. “Every one of us in this world is a game maker. We all have game ideas in our minds – especially when we are young. But the tools to make those ideas a reality are far too complicated. Only a few go deep into the rabbit hole of game development and publish a game.”

Remixing is the revolution of game making 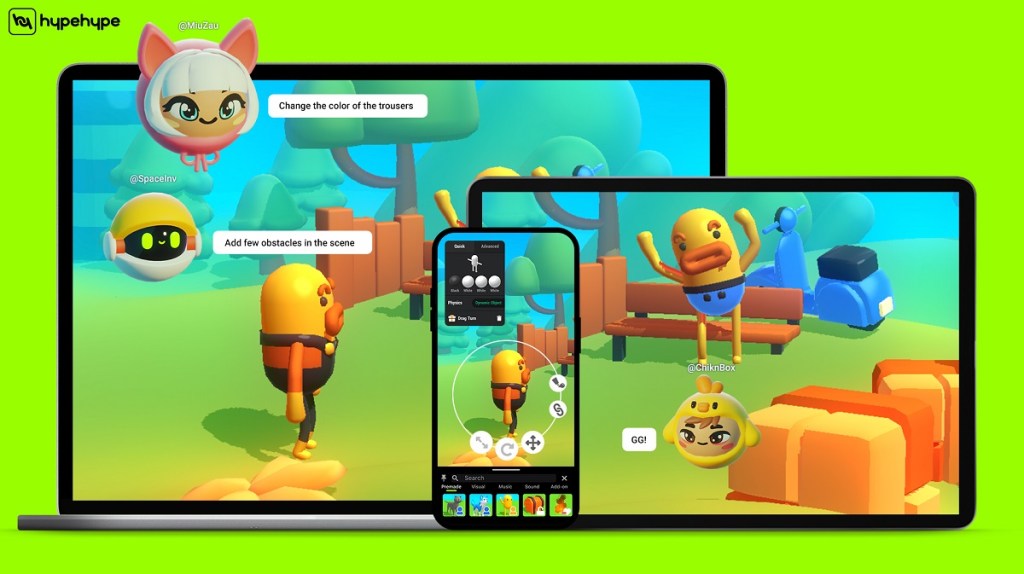 Above: HypeHype lets you make games on any device.

Creators can remix any existing game on HypeHype. Games can be instantly improved, evolved with new features and levels, or turned into a completely unique version with a different game genre or mechanic. HypeHype maintains the full history of the remix evolution with a transparent creator ownership. One of the cool things is that games can be created in collaboration between people in real time.

“With Hypehype, creators can instantly jump from inspiration to editing, and remix a unique game even in minutes”, said Vuorinen. “We’ve seen that remixing makes it possible to create new experiences 100 times faster than before.”

Supercell recently invested in HypeHype, which was formerly the mobile game developer Frogmind, to accelerate and expand the development of the highly promising user-generated content platform for gaming. Frogmind previously made the Badland and Rumble Stars games.

“We are excited to see the HypeHype team’s bold and ambitious vision to revolutionize how games are created and played,” said Jaakko Harlas, investments lead at Supercell, in a statement. “At Supercell, we are huge believers in the power of UGC and giving creators new and innovative outlets for their creativity. Our partnership with Frogmind started back in 2016 and we are thrilled and humbled to have the opportunity to continue supporting them on this new leg in their adventure for years to come.”

HypeHype app has been in technical early access in the Philippines since spring 2021. Creators have already made over 132,000 games just by using their phones, and rated HypeHype early access app with 4.6 out of 5 stars rating in the App Store. 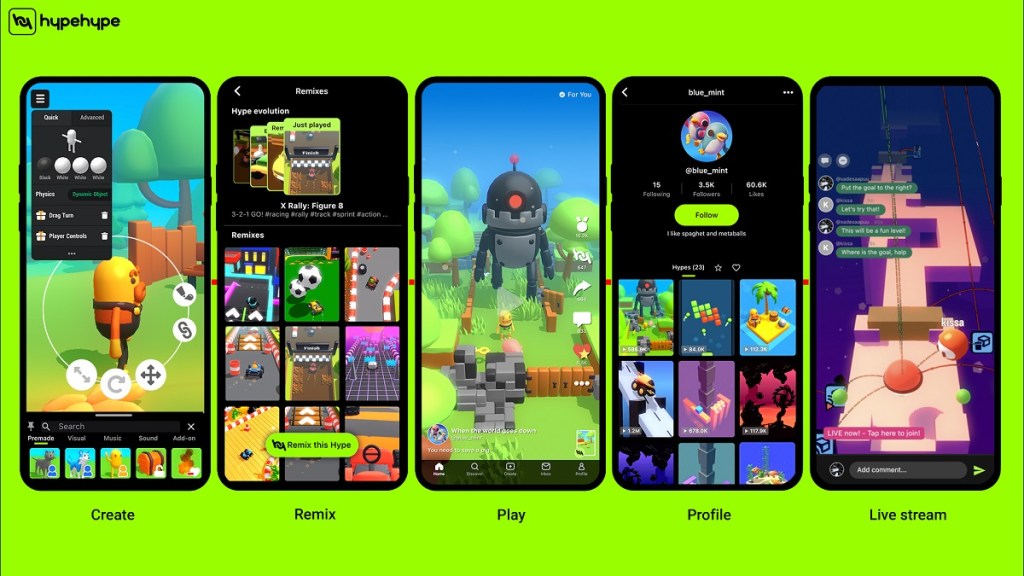 Above: HypeHype wants everyone to create games.

And the HypeHype app features include:

HypeHype early access is available to download on iOS and Android devices. HypeHype has grown its staff 50% in the last year into a team of 37 developers working on the HypeHype platform, and is looking for more awesome people.

The games can work on web browsers as HTML5 games, as you can export them in HTML5 and put them on a web site if you wish. If you want to focus on remixes, you can start with someone else’s game and then build on top of it, with full transparency back to the original creator.

“You won’t ever have to start from scratch,” Kallunki-Mättö said. “You can add a new level to it or add your own tags.”

They said that Apple and Google have welcomed the app. By next year, HypeHype hopes to enable multiplayer game creation.