There should be a genre known as the “funny puzzle games using narrators with British accents.” We’ve got another one of those with Schell Games’ I Expect You to Die for the Oculus Rift virtual reality headset.

I tried it out at the Oculus Connect event this week in San Jose, Calif. The title is part of a wave of good games coming for the Oculus Touch controllers, which debut on December 6. I Expect You to Die is a puzzler where you play an elite secret agent who has to escape from various rooms with various traps in the way.

“We started on that a couple of years ago. It was really the first serious VR project we had at the studio,” said Jesse Schell, CEO of Schell Games, in an interview with GamesBeat. “It came out of an argument, which was all about what worked and didn’t work in VR. We had some people who really wanted games about locomotion. I was arguing against that. I’ve been working on VR for 20 years. Don’t do that. It makes people sick. One of the devs got really frustrated and said, ‘This is stupid. This is why VR sucks. You put on the headset. You want to feel like a superhero. What kind of superhero gets tied to a chair?'”

And bingo. There were plenty of scenes in movies where a hero is tied to a chair and has to escape. 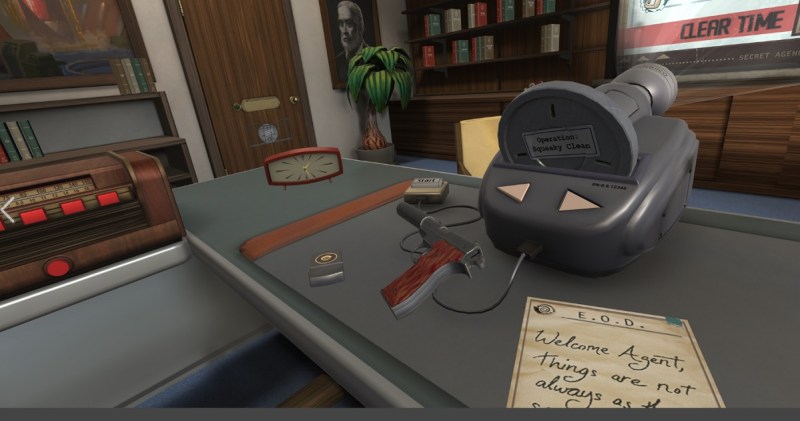 Above: The office environment in I Expect You to Die.

The title riffs on the famous quote from the film Goldfinger, where agent 007 James Bond says, “Do you expect me to talk?” And Goldfinger replies, “No, Mr. Bond. I expect you to die.”

“What a perfect title. Especially because we knew you’d be dying a lot in the game,” Schell said. “That could be a big part of the fun. All these things would go wrong, and you’d die over and over.”

You have powers of telekinesis to draw things to you, but you can’t move. You are basically stuck in one position where you can’t use your legs. You can, however, use your hands. You can pick things up.

And the British narrator tells you what to do at various junctions. Your job is to thwart the evil Dr. Zor without succumbing to traps and tricks that may cause the expectation to come true.

So, you can be stuck in a spot, tied to a chair by a villain, or in some other situation like that. After a brief tutorial, I learned how to pick things up, fire a gun, and draw things to me with my special power. Then, I went on a mission where I had to board a plane, get in a secret agent’s car in the cargo hold, then drive it out the cargo door in mid-air and parachute it down to the ground below. That was easier said than done.

I found myself inside the car in the cargo hold of the plane. I grabbed a key from the visor and put it in the ignition and turned it, all using physical movements with the Oculus Touch controller. The visor flipped down and a robotic voice spoke and scanned my eye. It then fired a laser at me and tried to kill me. When I ducked out of the way (moving physically), it then tried to kill me with a dynamite bomb. I had to disarm the bomb.

Above: A screenshot from I Expect You to Die.

I also had to figure out how to open the door. I had to grab an object, so I opened the window, and then I almost died from poison gas before I could get the window back up. That was where I ran out of time.

The game debuts on December 6 with the launch of the Oculus Touch. It will have four missions, with some bonus content. It will sell for $20 to $30.