With today’s launch of browser-based game Quake Live, you could say that id Software has come full circle. You can play the game for free, as long as you view the ads that come with it — a business model that takes us back to 1993, when the company released the original Doom. 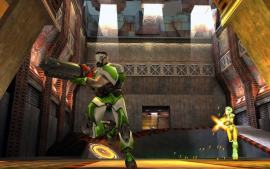 Back then, you could play the first eight levels of the game for free and then pay to unlock more. The strategy helped the company spread Doom across the globe, as addicted fans willingly shelled out to keep playing.

The company went on to release a series of high-end computer and console games — costing as much as $60 each — that earned the company millions of loyal fans.

With Quake Live, the company is re-releasing its vintage Quake III arena game (which originally debuted in 1999) as a new and improved free web game. In doing so, it is joining the ranks of game publishers worldwide that are experimenting with new ways to hook players, particularly as the recession makes premium games less affordable. This latest experiment shows that even one of the oldest game development companies around can try on a new business model.

“This is a test of a new twist on an old way of doing business,” said Todd Hollenshead, chief executive of id, in an interview.

While id prides itself on realism, Quake Live game will feature graphics from a decade ago. But the advantage of going that route is that the game should be able to run on any PC. It’s set in a tournament-style arena where you can see ads on the virtual walls, as well as alongside the border of the browser window, and at the end of the game when you’re viewing your stats. These ad placements should drive multiple page views for every game session.

While the game is based on Quake III, the company did a lot to refashion it for the mass market. Hollenshead said the team tweaked the match-making system so that players with similar skills can easily play together. That’s something that Microsoft offers with its Xbox Live multiplayer games. But the quality of the services vary.

With matchmaking in general, it’s easy to jump into online games where other players will just “throttle” you, Hollenshead said. Getting the skill-matching right in this game is critical because hardcore players are likely to be playing alongside “weekend warriors” whose skills have atrophied.

The new game also attempts to level the field. For example, the old game had a “rail gun” that a skillful player could use to take out a rival with one shot. Now it takes two. That way, dominant players can’t easily massacre “newbies.” You can also expect to see lots of rewards, even if you don’t win the round of play.

Each round is pretty quick, lasting mere minutes. As of last week, there more than 12,000 people playing online.

Quake Live represents part of an ambitious expansion plan for id, which has always been one of the game industry’s more artisan firms. Built around a small team and led by graphics genius John Carmack, id had fewer than 30 people working at the company when it launched Doom III in 2005.

Now it has more than 90 employees working on games like Quake Live and Rage, a road warrior-like game published by Electronic Arts. It will be interesting to see whether id can keep producing high-quality games on a consistent basis. I, for one, have high expectations. After all, their motto is to ship a game only when it’s ready to ship.